“When an author becomes an adjective, it means that he’s entered a higher category. We say ‘Melvillian’ in the same way that we say ‘Fellinian’ or ‘Hitchcockian'” – Philippe Labro

Throughout his career, Jean-Pierre Melville retained a passion for all things American – and especially for the classic Hollywood gangster and noir movies. He eagerly borrowed the iconography of the genre: the snap-brim hats, the belted trench coats, the crooners, the cars and the nightclubs – but made its conventions entirely his own, tailored to his highly stylised world. 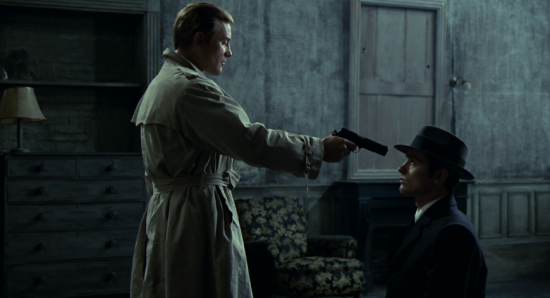 In American noirs, it is often the femme fatale who brings the morally ambiguous, alienated hero to his doom. There is no such sentimentality in Melville’s films.  They are masculine worlds without women. There is no one responsible for Melville’s anti-hero’s fate but himself. It is his destiny. He is destined for sacrifice, or self-destruction.

In Le Samouraï, Jef Costello’s fate is made clear from the beginning: the silence, the solitude, the bird singing in the cage – symbols of complete isolation and imprisonment. The dignity, the gracefulness, the excruciating attention to detail, the rigorous – even religious minimalist style of Delon’s acting – all of these elements draw inspiration from the Japanese culture and cinema, yet Melville’s films are his own, individualistic, understated and cool, an idealised world of mobsters and thugs, living and dying by a certain code of honour.

In Le Samouraï, Alain Delon recedes in the safety of his trench coat. It’s his armour. Together with the tilted downward hat, the trench is also part of what has come to define the protagonist of noir films. But he’s a different kind of noir anti-hero. He’s Melville’s noir anti-hero.

Like a samurai, Jef Costello abides by a code of conduct and leads a solitary existence. Systematically putting on his hat and coat before going out to get a job done, his dressing is like a well-rehearsed ritual. Everything about him is cool and calculated.

Melville considered Alain Delon one of the greatest French actors. When the director came to Delon’s house to read him the script for the film, after seven or eight minutes of reading, Alain suddenly looked at his watch and said “There hasn’t been a line of dialogue. That’s good enough for me; I’m making this film.” And when the Delon heard the name of the script, he beckoned Melville to follow him into his bedroom. Above his bed was a samurai sword. It was meant to be. 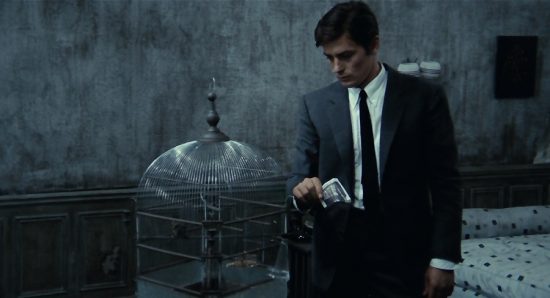 In a career-defining performance, in the role of a Parisian contract killer who has realised he is being double-crossed by his employees and seeks revenge, Alain Delon conjures Melville’s perfect anti-hero; his exceptional good looks and impeccable style meet Melville’s idea of the archetypal gangster image.

Clothes make the man in Le Samouraï. Everything is simple, stark, clean- cut, primordial to his lifestyle – the trim grey suit, the black slim tie and white button-down shirt, another black suit, the inky wool coat, the hat, the trench. Delon is dressed with the finest precision, but he seems completely unaware of his appearance. He’s completely detached from everything, hardly betraying an emotion. It’s part of the job, of his profession. He lives and kills alone.

There is a scene towards the beginning of the film, where Delon, stopped at a traffic light, is admired by a pretty young woman. His body language is minimal and signals that he has noticed her gaze, but gives her a blank look and turns away, without even satisfying her with a smile. Nothing distracts him from his fateful path. 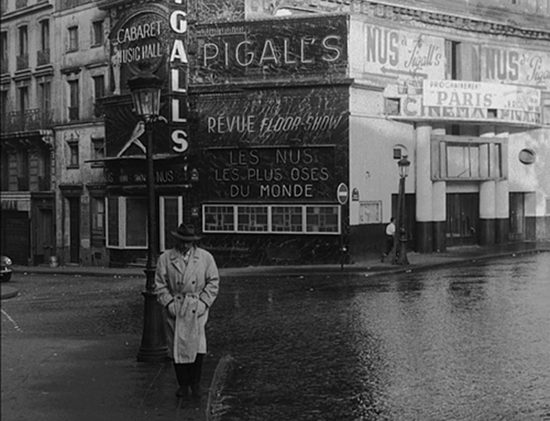 In Bob le flambeur, Roger Duchesne is Bob Montagné, an unlucky gambler and failed bank robber. He glides through gambling rooms and Pigalle nightclubs “in those moments between day and night… between heaven and hell”, as the narration goes.

Bob lives by a certain codes of honour: he is a gentleman crook, his word is his bond, he always gives a hand to those in the spot. Melville’s intention was to make a film about a robbery when he wrote the script in 1950, but then John Huston’s Asphalt Jungle came out and “I could no longer deal, either dramatically or tragically, with the preparation and execution of a robbery”, he told Rui Nogueira, who wrote Melville on Melville, a  book-length interview published in 1971. And so Bob became more of a “comedy of manners”.

This is what makes Bob le flambeur interesting: the film is not about the heist, but about Bob staying true to his essence. He is a gambler. He lives by night, and his clothes show it. His trench coat and fedora look authentic, crumpled, lived in. “The trench coats and the hats in later Melville films”, remarks Thierry Crifo, writer and scriptwriter, in the documentary Diary of A Villain, “are crisp and clean, but Bob le Flambeur isn’t clean; I mean the close-ups, night, his three day stubble, his trench coat, I find that more believable.”

Bob’s character belongs to Roger Duchesne, and that may be partly because Duchesne himself was a gambler in real life. He had accumulated debts because of which Melville actually had to ask the permission of the villains in Pigalle for Duchesne to come back there and film. “The face of a crook”, says Bob staring at himself in a window, adjusting his tie, dressed in his trench coat and fedora hat. It truly feels like he’s playing himself, wearing his own clothes, true to his nature. 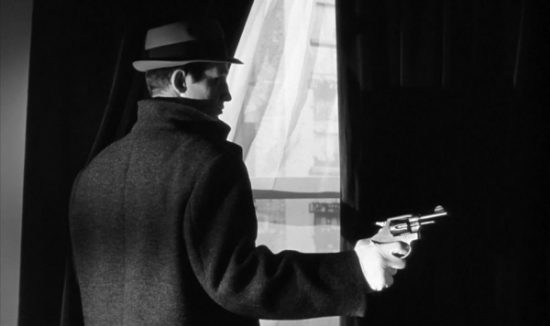 A tale of loyalty and betrayal among thieves, an elegant exploration of underworld duplicity, Le Doulos was the birth of the detective story, Melville-style. It marked the start of the director’s most important period, “the most flourishing and aesthetically pleasing period of his career”, as Denitza Bantcheva, writer of Jean-Pierre Melville – de l’œuvre à l’homme) concludes.

Le Doulos was also the first detective film that was referred to as metaphysical, Bantcheva continues. There is a philosophical reflection on human destiny and on what influences one’s fate, like the interaction between people, the role played by chance, misunderstanding and circumstance. And this existential theme would indeed be present in all Melville’s films from then on.

The film has Serge Reggiani as Maurice Faugel, a robber who has just done time, and Jean-Paul Belmondo as Silien, a safe-cracker who labours under the reputation of a police informant (“doulos” means hat, the gangster’s favoured felt Fedora, but is also slang for “stoolpigeon”).

His clothes are the first sign of ambiguity in his character. Unlike Reggiani’s Faugel, whose creased, well-worn trench reminds of Bob le flambeur’s faithful representation of real-life gangsters, Belmondo’s Silien paves the way towards that clean and crisp aesthetic from Melville’s later films. Appearance is important to Silien. He dresses carefully, wears fine clothes, his trench and hat and suit and coat are achingly cool. “You pay for those clothes by selling newspapers?” two policemen ask him during an interrogation.

There are certain unwritten rules which crooks don’t brake. Faugel uses the expression “proper crooks” in Le Doulos, meaning that crooks, Melville’s crooks that is, don’t betray their own kind, they stick with each other, they don’t rat, they are are rooted in the male code of honour. “I’m going to leave, I’m going to live somewhere, a place without cops and crooks, if that exists”, says Silien at one point. Maybe he knows he doesn’t belong with any of them.

With his inscrutable charm, Silien represents a loner, but also the damned, on whom destiny is hovering over, regardless of whether he’s on the good guys’ or on the bad guys’ side. 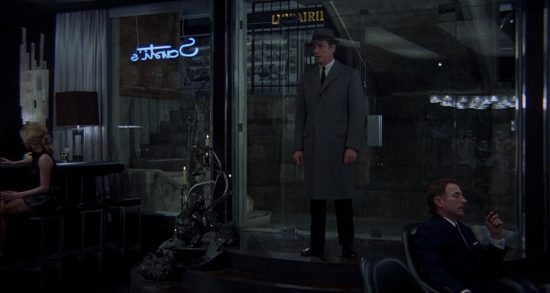 For Le Cercle Rouge, Jean-Pierre Melville returned to the heist story he had wanted to do in Bob le flambeur. It’s about two professional crooks, fresh-out- of-jail Corey (Alain Delon) and Vogel (Gian Maria Volonté), who has just escaped arrest, and another man, an alcoholic ex-cop, Jansen (Yves Montand), who takes on the job as a rehabilitating exercise.

It is in Le Cercle Rouge that Melville’s austere stylistic magnificence leads to a more profound connection with his characters and his stories of unwritten, deep rules of right and wrong that the men of the underworld live by. But I don’t want to steer away from Melville’s technical mastermind, and the theme of the robbery itself, because the almost half-hour- long, wordless, intense, magnificent heist is cinema-making in its most pure form. It’s one of the most memorable scenes in the history of cinema.

After the film ended this second time I watched it a couple of weeks ago (I have recently re-watched all Melville’s movies after many years), I immediately played that entire sequence again. And I would like to quote Philippe Labro, writer and filmmaker, who notes: “When Melville shoots Yves Montand climbing then descending and then climbing the stairs of the building in which the astonishing heist in Le Cercle Rouge is going to happen, he takes his time, all his time, and we are fascinated by the action precisely because it goes on for a long time, and because it announces another action. Time, according to Melville, allows the suspense to be established and the tragedy to be built.”

In a true Melvillian crime style, all the leading characters in Le Cercle Rouge are crooks, cops and crooked cops. Again, the trench coat is their dress code. Everyone from Delon to Bourvil (finally cast against type and who impeccably plays the inspector) wears one, but it is Yves Montand, who plays Jansen, who captured my attention. It’s maybe because he dresses well to hide reality. He almost dresses too well. A new job and good clothes are his ticket out of the rout, it’s his way of regaining self-respect.

At one point in the script, his character is described as follows: “Jansen, stretched out on his bed, fully dressed, filthy, unshaven, with a three-day beard. Like Faulkner in one of his alcoholic bouts.” He has harrowing hallucinations under the influence of alcohol, he’s sweating, disheveled, his shirt is dirty, he wears a slouchy coat.  But then he gets a call from Alain Delon and when he answers the phone we are given a glimpse into his past life and a completely different man – there is a beautiful, striking shot of Montand at his lowest having as background a Louis Vuitton trunk, elegant clothes and accessories. He is given this new job, and the next time we see him, when he meets Delon in the nightclub, his transformation is superb.

Melville shows him starting from his polished black shoes upwards, to the perfectly cut suit, tailored grey coat, striped shirt, slim knitted tie, and fedora. He is dressed impeccably and his look only gets better from that point on. In the heist scene he appears in la pièce de résistance, tuxedo, white shirt and bow-tie, and trench coat on top. He is the cool, composed, concise, and adept elite sniper again.