Set in a dystopian 2019, Ridley Scott’s film envisioned a decaying Los Angeles, bleak and neon-lit, with overpopulated streets and striking cityscapes of dark buildings soaring up into smog-covered skies and acid rain. It is a world in which technology has become so ingrained – a haunting foresight of the world we are living in – that it is forcing the characters, and us viewers to ask ourselves, “What makes us human?”

The Los Angeles of the future has become an environmental disaster, a mutant hybrid. Everyone who can afford it has moved to one of the “off world colonies”. The Tyrell Corporation has designed humanoids called replicants to be used as slave labour on the foreign planets.

The androids are virtually indistinguishable from real humans, but the law forbids them from setting foot on Earth. Yet some of these androids manage to slip through and it is the job of the ‘blade runners’ to hunt them down. It is not called execution, it is called retirement.

Based on Philip K. Dick’s 1968 novel Do Androids Dream of Electric Sheep?, Blade Runner is both visually striking and philosophically charged. It remains a landmark film in the sci-fi genre, and went on to influence a generation of film-makers and designers alike.

The costumes are just one of the many details that make Blade Runner so timeless. Much of the inspiration for the clothes came from film noir. The entire feel of the film is film noir. Cinematographer Jordan Cronenweth shot the film in high contrast, sparingly using colour and instead employing unusual camera angles and shafts of light to give the depth and style of classic black and white cinema.

“After reading the script, we definitely felt that Blade Runner was of that film noir genre, and we looked back to the films of the 1940s for inspiration. Deckard (Harrison Ford’s character) was as much a Gumshoe as Sam Spade (Humphrey Bogart),” said Michael Kaplan in an interview.

Scott himself saw Blade Runner as a film noir set 40 years in the future, complete with femme fatales and detectives in trench coats. Harrison Ford’s trench is indeed a clear nod to noir, but that unpredictable combination of shirt and tie plants his hardboiled detective on completely new territory.

Sean Young’s sharp costumes, a mashup of retro and futurism, were largely influenced by the tailored suits created by Hollywood costume designer Adrian.  The wide-shouldered look for women is the style innovation most often attributed to the costumer.

“I liked the idea of combining different shades of suiting fabrics to create patterns – something Adrian did,” continues Kaplan. “In this case I used amazing vintage suiting woolens in shades of grey and beige, with metallic threads that I was lucky enough to find, which created a subtle luminous quality.”

Adrian excelled in the use of black and white, but he was also a master of colour, often adopting the strong V-line of the military silhouette in his creations. He believed in ‘dressing the mind’, designing a costume to help the actress ‘feel’ the period or the role she was playing.

The padded shoulders, tapered waistline and pencil skirt would be the predominant silhouette for women from the mid-1930s through most of the 1940s, reemerging as the ‘power suit’ for women in the 1970s and 1980s, and which, thanks also to Blade Runner, has continued to be regularly reinterpreted by fashion designers throughout the last few decades.

Kaplan says “I wanted to create a futuristic heroine who was believable in the future, but with her feet firmly planted in film noir past.”

The costumes in Blade Runner seem realistic, believable for the world for which they were created – unlike in many other science fiction movies.

The clothes were innovative and daring, but had familiar references, like the old Hollywood glamour in Rachael’s case, or the early 1980s punk scene in the case of Daryl Hannah’s replicant character, Pris, who is described as a ‘basic pleasure model’ in her police file. Hannah came up with the blacked-out raccoon eye make-up herself.  The film served, in turn, as inspiration for Vivienne Westwood’s 1983 Punkature collection. 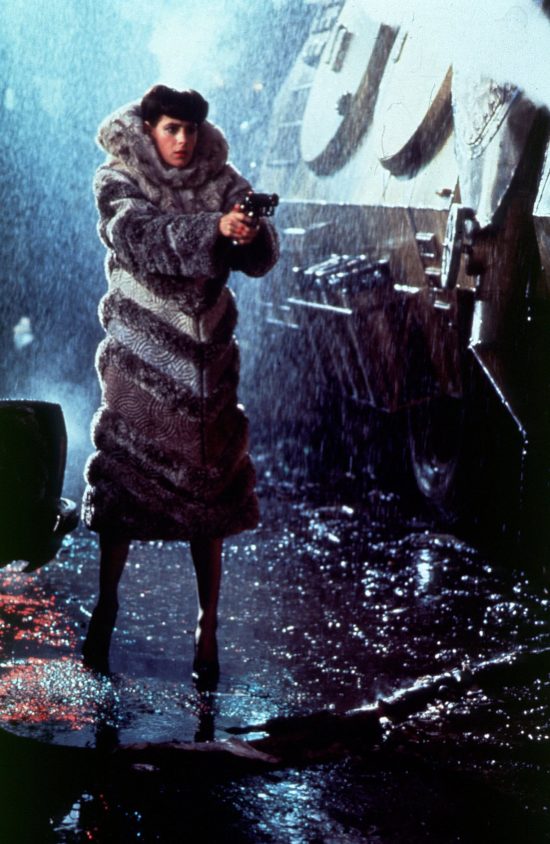 Sean Young as Rachael, wearing a fur coat. The different shades and fabrics, and the V-shapes of the pattern, two of Adrian’s signature elements.

Conjured from a variety of haunting images, like Edward Hopper’s painting Nighthawks, the skyline of Hong Kong at night, the fiery industrial landscape of Tyneside and Teesside of Ridley Scott’s childhood, the French comic book Métal Hurlant, and Fritz Lang’s Metropolis, the street sets in Blade Runner were rendered on paper by neo-futuristic artist Syd Mead and duplicated by the creative team, Laurence Paul and David L. Snyder almost exactly.

Ridley Scott saw Sean Young as a classic beauty. Philip K. Dick, after looking at a photo of Sean Young, called her the ‘super-destructive cruel beautiful dark-haired woman that I eternally write about and now I’ve seen a photograph of her and I know that she exists and I will seek her out and presumably she will destroy me.’

From her very first scene, Rachael’s image and look are something you cannot forget. Dressed in a black silk and snake skin two-piece suit with exaggerated angles, with her alabaster complexion, black smudged eyes and red lips (Marvin Westmore, who worked as the make up artist on the film said Sean Young’s lips were the best red lips he had ever worked on), she is one of the most distinctive characters to have ever been seen on the silver screen. Of a sensual yet fatalistic beauty, strong, mysterious, and utterly modern, she seems to belong simultaneously to the past and to the future – “she’s more human than human”.

There are no science fiction clichés in 1982’s Blade Runner costumes. Thirty-five years on, the fashion still looks futuristic, while the sequel succumbs to stereotypes. I am afraid that, as in other artistic fields, in fashion, too, everything that could have been invented already has. Even the future.