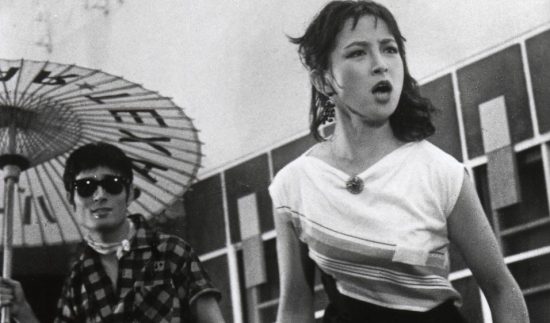 The scenery is dystopian: the area around an American naval air base in post-war Japan with a small agglomeration of bars, pubs and brothels. Director Masaki Kobayashi delivers a vitriolic portrayal of a society dominated by crime and corruption in a sterile world of greed and lust, violence and despair.

The young gangster boss Jo has the area under his control. He’s terrorizing the whole neighbourhood and forcing the landlady and the rich investor to go along with his plans. The protagonists are yakuza, prostitutes and the inhabitants of the nearby tenement. All of them belong to the margins of society, with the exception of the student Nishida, who prefers his shabby room to the better, more expensive accommodation. They include the elderly man who has illegal dealings with the GIs, the jobless farmer whose wife is a prostitute, and the young man who poses as a student and works for Jo.

Most of these people are castaways in the New Japan emerging economically after defeat in the Second World War. They wear old and tattered clothes or nothing but an undergarment. Not unlike Kurosawa, Kobayashi uses climate as a signifier of individual and social conditions: the heat contributes to the feeling of constant pressure, and sweat is the only thing these aimless drifters produce. It functions as an expression of their desire and inner torment.

Shikuza, a young waitress, is the object of desire for both Jo and the student, Nishida. A symbol of soiled innocence, she is abused by Jo when she faints, and then becomes his mistress as she becomes both attracted and repelled by the man who is obsessed with her.  Jo’s sociopathic personality oscillates between malice and charm, tenderness and cruelty. He exudes virility and coolness, his eyes hidden behind sunglasses. With his tall figure, unusual features and striking eyes, he makes a stark contrast to his physically less attractive henchman; his white suit and flowery shirts contrasts with the plain clothes of the ordinary Japanese people. 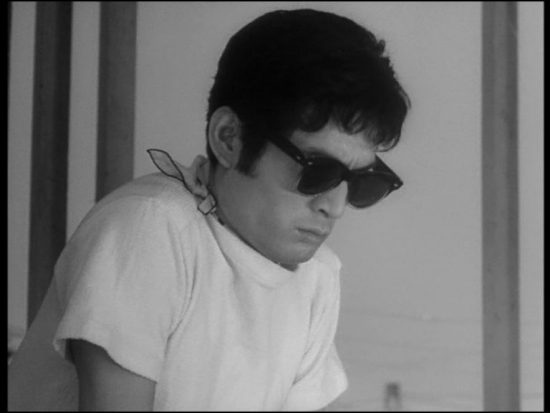 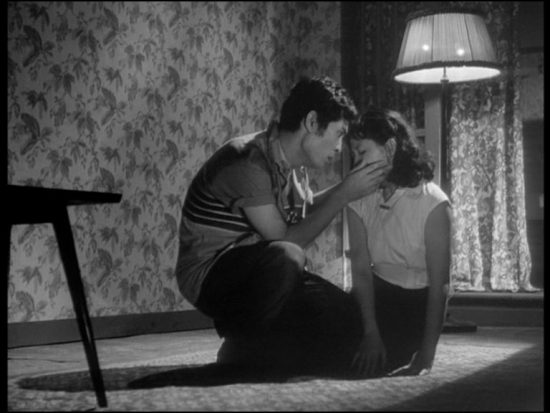 The tenement in which he lives is a dark and filthy place, its abjectness underlined by frequent references to the shared toilet and the sewage, its inhabitants stand for human weakness rather than evil. They are cowardly and disloyal, greedy and resentful, but they are also abused and desperately trying to survive. When a communist appeals for action and solidarity, he is  ignored. Faced with the absence of “worker consciousness”, he starts crying uncontrollably.

Nishida’s courage is revealed when he protests against the demolition of the tenement. Unlike the communist, he is driven neither by ideological motivations nor by compassion, but by love and personal pride. His unspoken belief in individual responsibility is challenged when he refuses to donate blood for his neighbour, but rather than lie to avoid helping the sick man, he expresses his opinion openly and without fear. It is Nishida who declares: “I don’t like poverty. It makes you lose your dignity.”

Under the influence of the gangster boss,  Shikuza starts wearing make-up and cheap earrings, but remains unaffected by the squalid milieu which she has become caught up in. For Jo, she represents the respectability and innocence he longs for. Her symbolic status in the film is revealed in her first appearance when the jazz music stops at the exact moment the camera captures her under her parasol, a Buddhist symbol of protection. The film starts on a sunny day, and moves towards the darkness of the night in which deadly obsession, hatred and jealousy threaten to snuff out the honour and dignity of Shikuza. She is Jo’s prey, she is someone he adores yet harasses, while Jo – demon, peacock and lost soul – is the classic example of a disoriented young man seeking for recognition.

He is a dark version of Matsunaga in Akira Kurosawa’s Drunken Angel, representing a masculinity in crisis whose arrogance and violence merely hide a lack of (sexual) power. However, Jo is successful whereas Matsunaga failed. His contacts with businessmen and people at the top of the bureaucratic hierarchy allude to the entanglement of politics, the economy and crime in Japan. 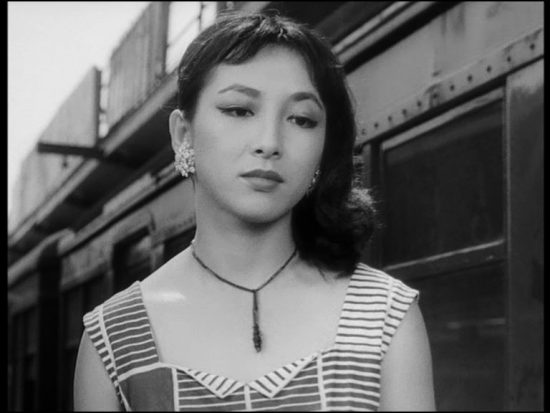 Kobayashi openly associates the decadence and misery of these lower depths of Japanese society with the American presence. The very first shot is that of a military plane flying above the row of bars, and in another sequence, planes from the base cause the wooden structure of the tenement to tremble. The deafening noise recalls the presence of the Americans as a form of daily violence against the Japanese people. The houses that stretch along the dusty road could be in Texas, and the only vehicles are military jeeps. Even the bars have English names: “Black Cat”, “Rose Bar” and “Paradise Bar”. The film makes it perfectly clear that the name “paradise” is misleading: the place is a world of moral and spiritual decay. In 1957, Kobayashi was allowed to show what Kurosawa could not during the occupation. 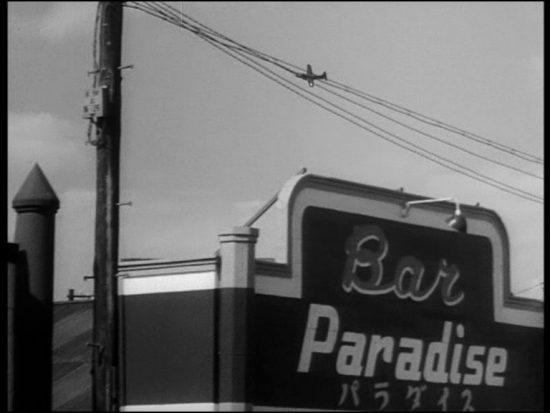 The area around the gates of the Atsugi naval air base is portrayed as a bleak caricature of post-war Japan. Everybody is dependent on the Americans. As Kurihara says – he himself does deals with the GIs, helping them leave the base secretly so they can have a good time in the brothel.

The makeshift village on the fringe of the base symbolizes capitalism and the materialism of a system based on consumerism, while posters and signs in the streets comment ironically on the state of society. A clean Japanese hotel with its linear architecture stands in stark contrast to the shabby and crowded places near the naval base. The villain is not simply the imposing culture of the United States, though.

Director Kobayashi also criticizes the opportunism and the lack of spiritual values in his fellow Japanese. A remark made by the neighbourhood landlady echoes this duality: “Let’s be democratic. It’s give and take.” Communist ideals also have no place in a community which is guided by treachery, cowardice, ignorance and fear.