One of film noir’s defining actors, Gloria Grahame gave her femme fatale characters a raw, vulnerable sensuality. She was not simply pretty. Her glamour and sexuality hid surprising, unexpected emotional registers. Her bad girls were human. Her characters were smart, daring, warm. I can never quite figure out Gloria Grahame on screen. Isn’t this one of those qualities that makes you want to watch a film over and over again?

I have gathered here three of Gloria Grahame’s best performances, all in noir films, benefitting from François Truffaut’s assistance; he wrote often about her, and it is easy to see that he had an affinity for her: “The beautiful eyes of Gloria Grahame make you die of love, then wait a little longer, until another movie is released.” That kind of screen magnetism is lost today. 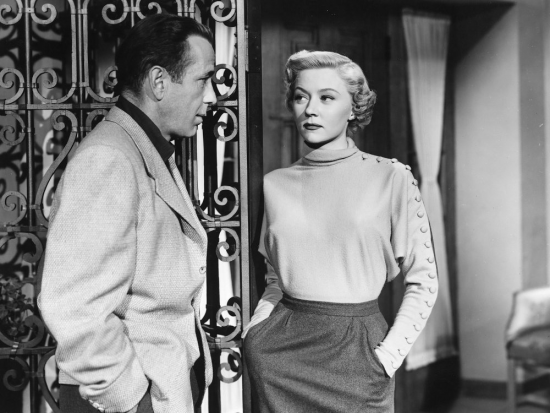 In a Lonely Place (1950), directed by Nicholas Ray

Nicholas Ray pursued a strong narrative and visually-overwhelming obsession in his filmmaking, which was very much against the Hollywood studio system, and this was most obvious with the films Knock on Any Door (1949) and In a Lonely Place (1950). François Truffaut named them Ray’s masterful films. And it was with these two films that Ray definitively made Humphrey Bogart something much more than an actor: a personality. Bogart wanted Lauren Bacall for the female lead in In a Lonely Place, but Warner refused to release her from her contract.

Gloria Grahame was given the part instead, and she excelled in the role, which is probably her best acting performance. She plays no femme fatale in the film. She’s not the one who brings Dix to his doomed fate, as often happens in noir films. She is the right kind of woman, the only one capable of taking him out of his darkness. The fact that she fails, the profound breaking-apart at the end, is what gives the film its long life and one of the most haunting endings in the history of cinema.

Ray did not want to make Dix the murderer, as it turns out in Dorothy B. Hughes’ novel, where the character attempts to strangle Laurel to death in the climactic scene. The director’s vision paid off: the ending is actually bleaker in that it doesn’t matter that Dix is innocent, because he easily could not be. “I can’t do it. I just can’t do it. Romances don’t have to end that way. Marriages don’t have to end that way. They don’t have to end in violence,” the director argued. A broken heart can be the worst kind of ending, though. “Whether you’ve had your heart broken, or broken somebody else’s heart, Ray has here made room for every heart to relate to this film’s haunting outcome,” F.X. Feeney concludes in the book Film Noir: 100 All-Time Favorites.

Laurel Gray is Dix’s beautiful new neighbour, a failed actress, who seems to have a great influence on him. “She’s not coy or cute or corny. She’s a good guy, I’m glad she’s on my side,” Dix says of her. Now that’s a compliment I would take any day. She is his match. Cool and composed, she strides down the courtyard in a straight-lined skirt and turtleneck – simple, stylish, yet revealing a buttoned-up, controlled character.

I have always admired the subtle, yet optimum effect of Gloria’s costumes in this film. In fact, every piece of clothing she wears (designed by Jean Louis) is buttoned up, from rollernecks, even to an evening gown and fur-cuffed robe. Because she isn’t in control after all, and whatever hopes and dreams Steele and Laurel might have had, they are crushed too soon and too radically. 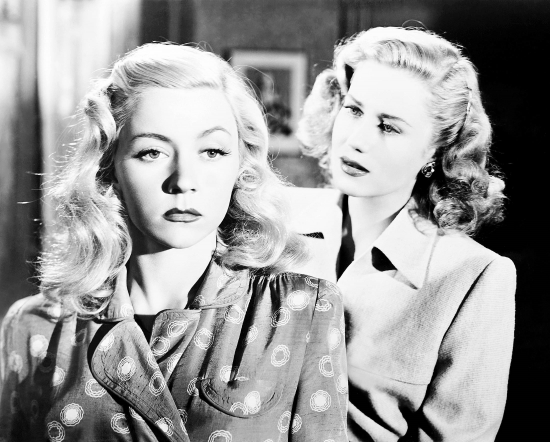 This film was one of the first Hollywood movies to address racial discrimination and anti-Semitism. Most of Dmytryk’s noirs are psychological. Gloria Grahame earned her first Oscar nomination for her portrayal of Ginny, a drinking dance hall hostess who holds the answer to a key alibi. Her presence on screen was succinct, but it was the first time she portrayed a shadowy woman of questionable morality in an atmospheric noir.

“It is permissible to have forgotten Crossfire,” Truffaut would write, “but not a young blond woman who was better than an intelligent extra. As a prostitute, she danced in a courtyard. Even professional critics noticed the dancer.” Truffaut might have dismissed Crossfire, but it was a film that showed that film noir is defined not just by design, cinematography, and presentation, but especially by themes, issues, and characters. Also, it was the first so-called “B-movie” to be nominated for best picture at the Oscars. 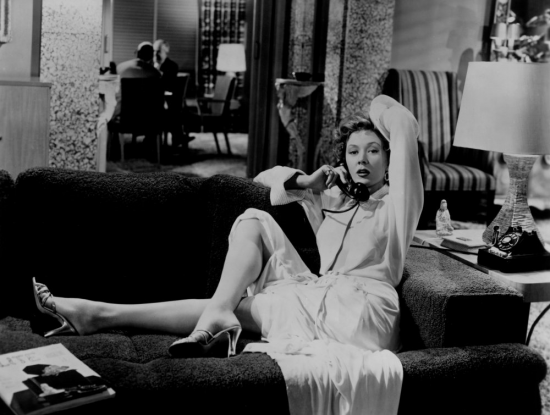 “I’ve been rich and I’ve been poor. Believe me, rich is better.” -Debby Marsh

It is one of the all-time best noir films, and it gets better as it unreels. On her first collaboration with Fritz Lang (and the first time she teamed up with Glenn Ford in a Lang film), Gloria Grahame plays Debby Marsh, whose goal in life is to get a fur coat. Her Jean Louis costumes show that she has reached her aim, but not without consequences. She finds herself the victim of her gangster boyfriend (Lee Marvin), who sadistically throws a pot of boiling coffee in her face, believing her to be an informant to the police. Debby is “[o]ne of the definitive figures in the Lang universe, and she stands sanctified as the most hieratic of Lang’s American heroines,” Richard T. Jameson remarks in Film Noir: The Directors.

In an interview with Silver Screen, Grahame once said, “I dote on death scenes, or any kind of Spillane-type manhandling, because it is those scenes which linger in an audience’s memory. I don’t want to be typed as a woman with a face nice enough to look at, but I am interested in roles that sometimes turn a cinema-goer away in horror. So I didn’t mind having my face horribly scarred because my gangster boyfriend threw a pot of boiling coffee over me. Being glamorous in movie roles all the time is not only artificial but horribly monotonous… So far, no one has offered me the role of the Hunchback of the Notre Dame. Believe me, I’m the girl who would play it.”

One thing that set Grahame apart from other actresses was her willingness to go there — to show the ugly parts of life, physical or otherwise. In The Big Heat, she goes all the way.