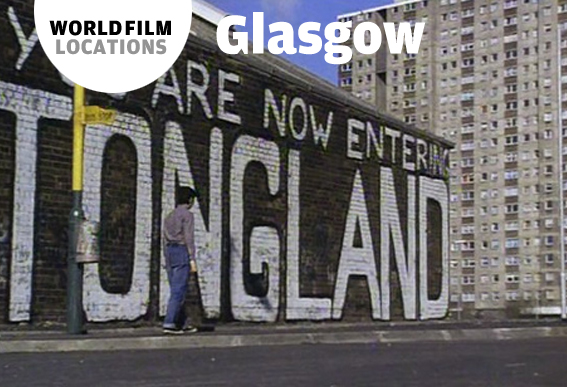 World Film Locations: Glasgow is one of the latest releases in Intellect’s World Film Locations book series. Representing Scotland’s biggest city, it is a book of contrasts, from Glasgow’s kitchen sink social realism by Ken Loach and Peter Mullan to the recent trend for using Glasgow as a set for Hollywood backdrops. Last year the city was redressed as Philadelphia for World War Z and transformed into 1970s San Francisco as part of Cloud Atlas.

It is a city steeped in cinematic history, and World Film Locations: Glasgow aims to capture important moments and movements, as well as acting as a guide for viewers and visitors. As with every book in the series, it is impossible to be all-encompassing, and in order to select a representative sample of Glasgow on film, a few films – some of them real Glasgow gems – did not make the final cut.

With that in mind, we have compiled a few of the additional web exclusive scenes from World Film Locations: Glasgow especially for Big Picture Magazine readers.

Derelict sites, domineering high-rise flats, and smog-tarnished tenements signify the threatening Glasgow ganglands of Gillies Mackinnon’s 1960s-set Small Faces. So it’s a dramatic contrast to find one notorious gang use a comparatively opulent art gallery as their nighttime playground. Interestingly, art runs throughout this film even amid the two main gangs’ vicious territorialism. The opening titles reveal a cartoon map of Glasgow illustrating gang territories and simultaneously satirizing the leaders and their associated bloodshed. There’s a mischievous tour of Glasgow School of Art and, now, the night at Kelvingrove. 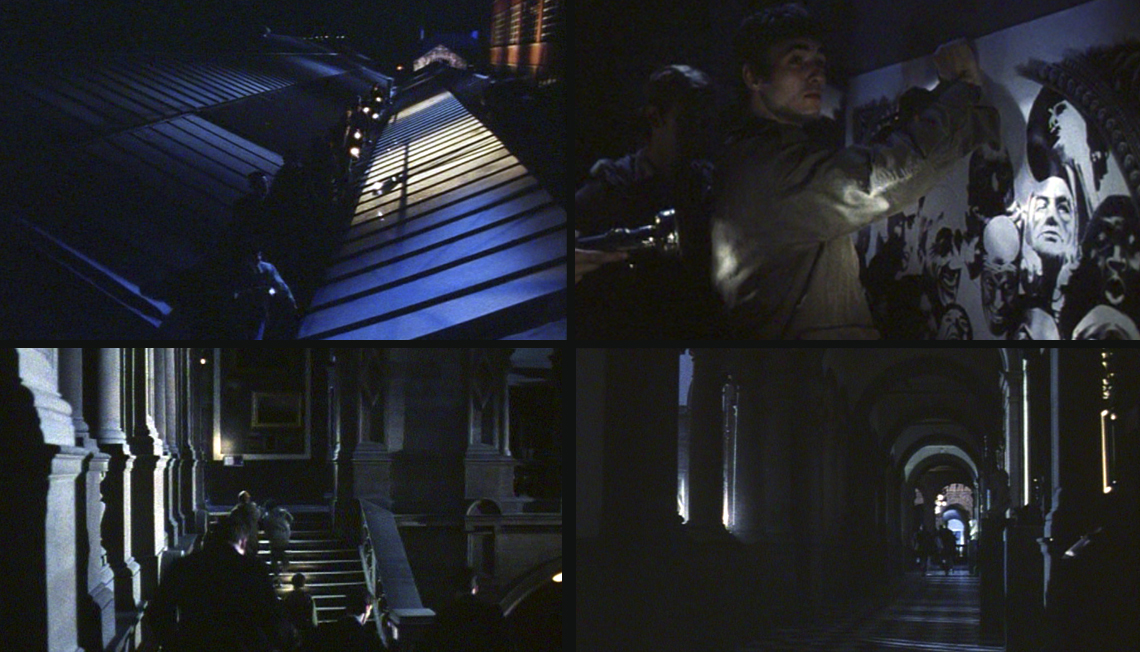 Central protagonist, 13-year old Lex Maclean (Iain Robertson) has accidentally shot the infamous leader of the Tongs and desperately seeks protection from rival gang-leader, Charlie Sloane (Garry Sweeney). His ‘initiation’ shows Lex being hoist by a rope from a rooftop into a black void, screaming, “it’s an art gallery.” No routine break-in, Sloane knew this was his chance to be immortalized in art. He had already cajoled Lex’s artistic brother Alan (Joe McFadden) into producing a drawing “in your official capacity” for the Glen gang. Now inside the gallery, Alan contentedly draws Sloane’s portrait – into an existing artwork. Like everyone else, except Lex, he appears to swallow the image of Sloane as a cultured patron of the arts – as Lex sarcastically suggests, “a real working-class Medici”.

The portrait completed, Sloane nods his approval liberating the gang from the reverent stillness and quiet. They run cheering throughout the Victorian building.  Their torches dance across artworks in the darkness, highlighting details of vast landscapes, fairies, people’s facial expressions. Subliminally these reinforce Small Faces’ themes of discovery and hedonism. Finally lingering on Faed’s painting, Last of the Clan, the sequence concludes with a haunting impression of heartbreak and wisdom, predicting what young Lex faces next. [Neil Johnson-Symington] 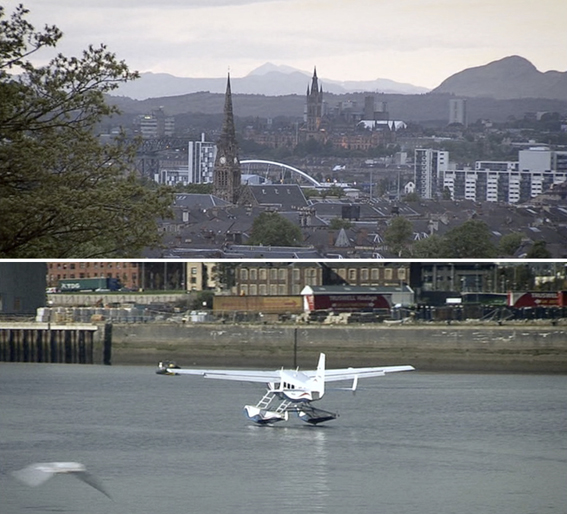 Carter Ferguson’s romantic comedy Fast Romance is a celebration of cinematic Glasgow. The film pays homage to the city, as well as to notable Scottish films, many of which were set in Glasgow. The opening shot is of a seaplane on its descent into Glasgow City Heliport. This Hollywood trope aids the viewer into the narrative and functions as a movie introduction into the city. This image is intercut with others of Glasgow: a bustling St. Vincent Street, a fast-paced Charing Cross, views from Queen’s Park looking out over the city, and a statue of St. Mungo at Kelvingrove Art Gallery and Museum.

These shots firmly situate the viewer within Glasgow, yet they are of little individual significance to the narrative of the film, and consequently, Fast Romance is as much about the filmmakers’ love of Glasgow, as it is a love story between its characters. The film also embraces the city’s cinematic heritage, as well as that of Scotland more generally. Ample references are made to celebrated Scottish films, which were evidently a source of inspiration for first-time director Carter Ferguson. For instance, the filmmakers went out of their way to film several key scenes on a bridge that featured in Gregory’s Girl (1981). In the opening scene, after the many images of Glasgow, the seven title characters are introduced, and during this, two of the characters are briefly shown passing over a bridge last seen onscreen in 1981. [Linda Hutcheson] 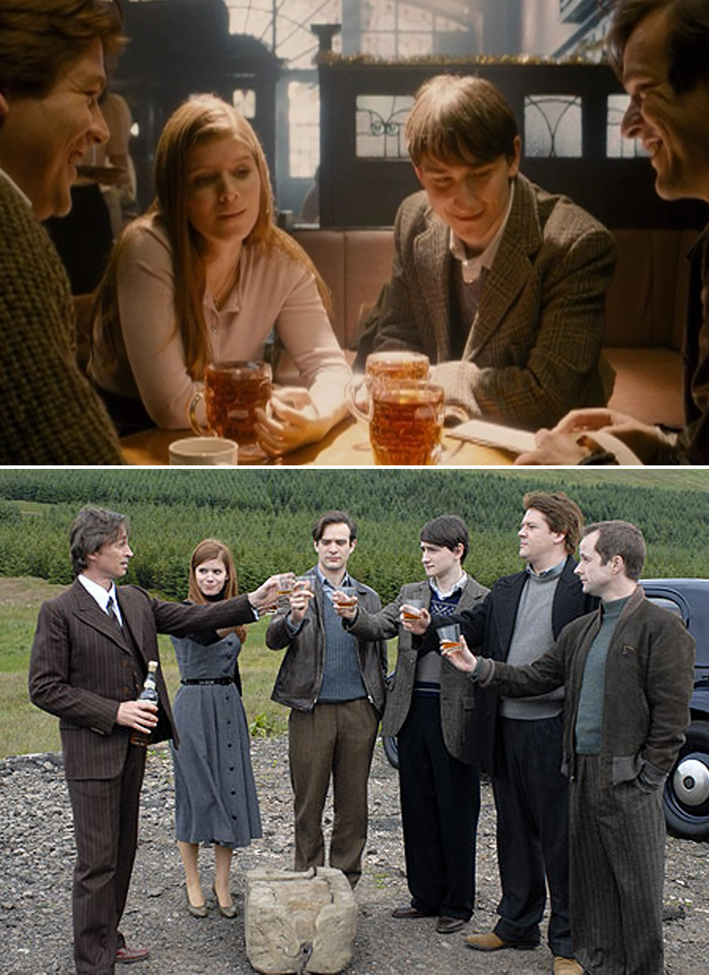 This based-on-real-events story of how Glasgow University law student Ian Hamilton and a group of friends stole the Stone of Scone from Westminster Abbey in 1950 caused a minor stir upon release with its shortbread tin depiction of Scotland. With the country viewed by many as little more than an English colony, idealistic student Hamilton assembles a ragtag group for whom the ancient coronation stone is a symbol to be used as support for the groundswell of feeling over Scottish independence at the time. But the film is a caper, a highly romanticised confection probably made more to appeal to international audiences who still cling to notions of Brigadoon and Braveheart than as any sort of rallying call for modern Scots.

Though it’s supposed to be a pub in London, the moments where Hamilton (Charlie Cox) and his co-conspirators (Ciaron Kelly, Kate Mara, Stephen McCole) plan their attack were filmed in the oldest pub in Scotland’s largest town, its wood-panelled elegance adding to a 1950s atmosphere that’s given credence by the dreadful looking beer. It’s one of several locations in and around the city including the cloisters of Glasgow University and Carlton Place on the south bank of the Clyde that doubled for Glasgow, London and beyond. As they pick over the details of their heist and the getaway, joking nervously that the next time they meet could be during prison visiting hours, the do or die nature of their endeavour is cemented, proof that all the best plans are hatched in pubs. [Paul Greenwood] 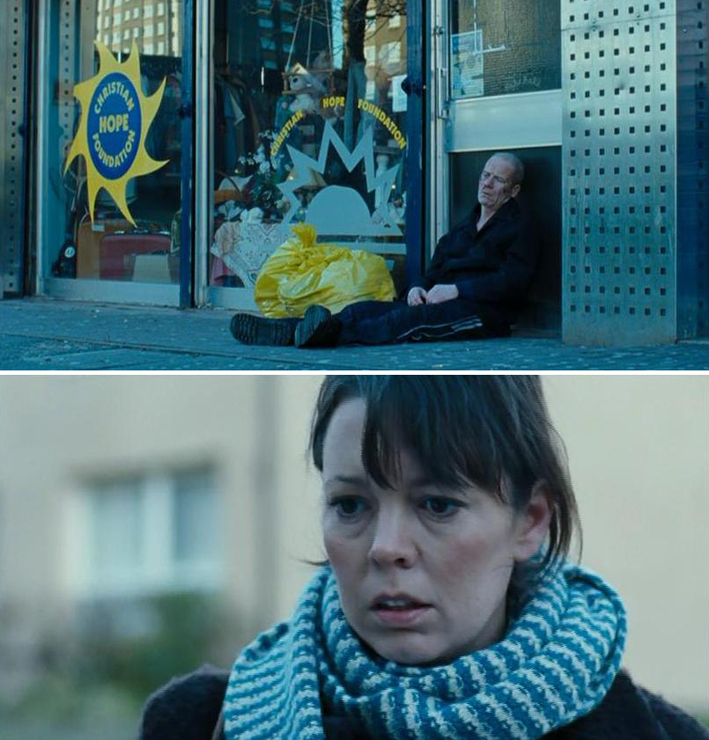 When Paddy Considine released his 2011 feature debut, Tyrannosaur, to universal acclaim, critics were quick to note that the film was an extended version of his BAFTA-winning short, Dog Altogether.

Both revolve around Joseph (Peter Mullan), a troubled, violent drunk first seen fatally kicking his dog in anger. Later, after an altercation in a pub, Joseph takes refuge behind a rack of clothes in a Christian charity shop, whose owner (Olivia Colman) prays for him. The next morning, after Joseph is himself beaten up, she arrives at work to find him lying on her storefront.

Due to funding stipulations, the two films were shot in different cities – Tyrannosaur in Leeds, Dog Altogether in Glasgow – but Considine mostly strips away recognisable landmarks to make Joseph’s surroundings universal, an Everyplace of despair and deprivation. Without local knowledge, it’s hard to spot the joins, although the concrete tower blocks looming in the background place Dog Altogether’s shop to Glasgow’s Townhead area, specifically the run-down Kennedy Path, where an empty retail unit was hired and dressed for the shoot.

The Glasgow-raised Mullan looks (and sounds) at home here, especially when Colman’s character asks Joseph his name and he growls in his distinctive brogue, “Robert De Niro.” Without missing a beat, she replies, “Would you like a cup of tea, Robert?” anticipating the short’s hopeful, redemptive ending. In the bleaker, more ambiguous Tyrannosaur, things aren’t quite so simple, but in Dog Altogether charity begins, not at home, but in a shop. [Simon Kinnear]

Read more additional web exclusive scenes from World Film Locations: Glasgow on the Park Circus blog, including Living Apart Together, which premieres Sunday 24 February at the Glasgow Film Festival at 1.15pm. The film is available for theatrical screenings worldwide and will also be available on DVD in the UK from 4 March