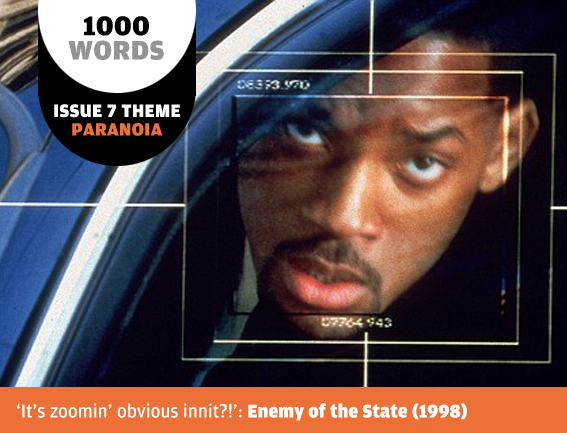 We’re all detectives now, thanks to today’s photo and video technology. We can all isolate single frames of footage, blow them up, enhance them and present them as evidence of something or nothing from the comfort of our laptops for the edification of who knows who on the web. And the filmmakers know that. Boy, do they know that.

The advent of our CCTV culture has brought with it a superficially miraculous yet stultifyingly simplistic way for directors to reveal pieces of information to their audiences by zooming in and enhancing frames to prove Mr. X couldn’t possibly have been the murderer or Mrs. Y was in the background at the casino on such-and-such a day and not dead after all. They keep on using this trick time and time again and every time they think it’s really nifty and that cinemagoers will think it’s amazing.

In fact it’s a tired old staple of the thriller-maker’s box of tricks. Not only that, and without wishing to be nerd-factor-ten pedantic about technological limitations, it repeatedly presents the impossible as undeniable proof, thereby stretching the plausibility elastic band of movies to snapping point. Don’t believe me? Have a look for the word ‘risible’ in your dictionary and you’ll find ‘the isolation and enhancement of a frame of film or video footage as a smug and convenient means of resolving a mystery in not-very-good films’ as a key definition. Go on, have a look. Go on.

Blink and you’ll miss them at it again. Look no further than The Girl With The Dragon Tattoo (Niels Arden Oplev 2009). In an otherwise excellent film the investigative journalist seeking the identity of a murderer is able to miraculously piece together a series of forty-year-old photographs into a sort of flick book animation with a few mouse-clicks in order to prize a vital clue from some dusty old evidence. Enough to make your typical semi-engaged audience member (you know, the sort who might have their eyes on the screen but still has their thumb on their iPhone during the film) go ‘ooo that’s clever, isn’t it?’

Perhaps it was clever. Once. It must have seemed pretty clever back in 1948 in the James Stewart vehicle Call Northside 777 (Henry Hathaway). Stewart’s reporter, in trying to prove that a witness lied in a trial eleven years earlier, blows up an old photo of the witness and the accused together, so that a minor detail – the date on the newspaper in the hand of a paperboy in the corner of the photo – becomes clear, thus establishing that the witness saw the suspect the day before she made her identification, was therefore lying, and the suspect is therefore innocent. Clever maybe, but also photographically impossible, probably even with today’s photo-enhancement techniques.

The trick was clearly still deemed clever enough to form the plot coat hook in Blowup (1966) upon which director Michelangelo Antonioni hung his Swinging Sixties stylizations. David Hemmings blows up sections of photos taken in a park and hangs them around the room to construct a narrative. Is that a hand holding a gun? Is that a dead body in the grass? Ironically, while this photo-zoom clue narrative seems like a flimsy excuse for the film’s excesses, it not only shows a more believable outcome of photo-enhancement but also has something to say about the nature of interpreting what we see. Each blow-up causes more complexity, rather than clarification. 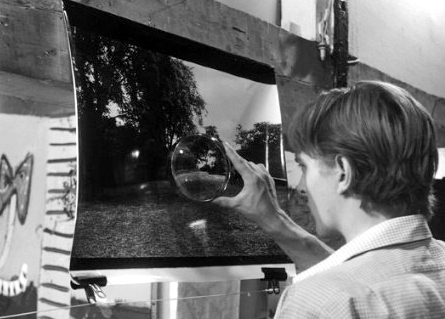 Photography, masquerading as the objective gaze, tells us that seeing is believing, and that believing is truth. Blowup demonstrates that only the first part of that statement is true. Gosh, that was a bit deep wasn’t it boys and girls? Never mind, Mel Brooks demolished the scene in High Anxiety (1977) when Brooks’ snapping sidekick blows up a photograph then pins up a series of even greater enlargements until he finally gets one roughly twenty feet across, which he examines with a magnifying glass before exclaiming, “Aha!”

From the 1980s onwards it seems every second thriller has rubbished the laws of physics by lamely employing a ‘freeze it there!’ moment to allow the star to point their pudgy digit at a newly revealed detail on the television/VDU/laptop screen. Watch out for it in such weighty epics as:

No Way Out (Roger Donaldson 1987) – with a plot hinging on the excruciatingly slow ‘enhancement’ of a tiny, blurry Polaroid implicating Kevin Costner as a Soviet mole. Like we care.

Enemy Of The State (Tony Scott 1998) – in which they take a frame from a security video, and then rotate the image in 3D in order to see a shopping bag hidden behind someone’s back. Do me a favour.

Déjà Vu (ah, Tony Scott again 2006) – [takes deep breath] in which a secret government agency, seeking to apprehend a terrorist, recruits Denzel Washington to help them with an experimental imaging system that uses satellite data to reconstruct a bomb site in 3D, zoom in at ground level, go inside structures, even supposedly recreate audio. Denzel is skeptical at first, but then it is revealed that they are actually folding space-time in order to view past events in real time. So that’s alright then.

It’s the sort of plot-crime that now happens practically every week on CSI: [insert your nearest city here]. But it’s not all bad. Here’s two ways that filmmakers have used this trick and managed to retain their credibility: 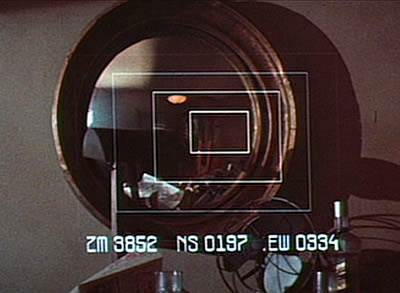 1. Set your story in the future so that the image enhancement technology is beyond criticism. The best example of this would have to be Blade Runner (Ridley Scott 1982 – look and learn Tony) when Deckard uses an Esper Machine to scan a crime scene photograph. The Esper turns the photo into a three dimensional capture of an event, enabling him to zoom into a high resolution picture, and navigate it. Deckard uses it to look round a door to see one of the replicants.

2. Allow the mad logic of your story to permit the impossibilities of the trick. It’s a TV example, but the top execution of this is in Twin Peaks (David Lynch 1990) when Agent Cooper analyses a video, zooms in and spots the reflection of James Hurley’s motorcycle in Laura Palmer’s eye, placing Hurley’s whereabouts in relation to Palmer’s murder. Now that is clever, isn’t it.