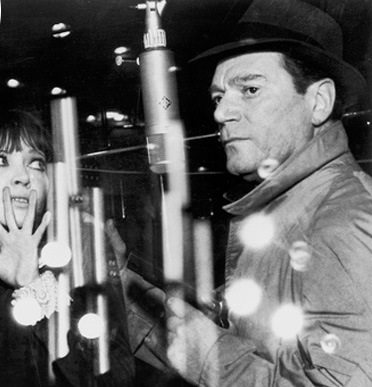 The character of Lemmy Caution – a cliché-surfing private eye in the Sam Spade / Philip Marlowe mould – first appeared in a series of stories (with titles like ‘Dames Don’t Care’ and ‘You Can Always Duck’) by English author Peter Cheyney and then, played by American actor Eddie Constantine, in a number of popular French B-movies. Here, again played by Constantine, he appears in something very different: a philosophy-heavy, sci-fi-rich genre gumbo by auteur extraordinaire Jean-Luc Godard.

Alphaville is a dystopian technocracy where citizens are ‘slaves to probability’, executed for acting illogically and governed by the ultra-rational pronouncements of Alpha 60, the only celluloid supercomputer creepier than HAL 9000. Caution arrives from ‘The Outer Countries’ in search of missing scientist Leonardo von Braun and AWOL undercover agent Henri Dickson. His cover story casts him as Ivan Johnson, a journalist for Figaro-Pravda (the newspaper’s name is enormously evocative: here is a future in which the USSR’s most prominent paper has merged with France’s conservative, Western-facing Le Figaro) and around him in Alphaville are futuristic trains, architecture and attitudes – but, crucially, no spaceships, robots or ray guns.

‘This,’ as Andrew Sarris wrote, ‘is science fiction without special effects.’ Unlike other cinematic imagining of things to come from Metropolis to Blade Runner and beyond, Alphaville has no specially-constructed sets designed to awe the audience with far-fetched images of an almost unfathomable future: it was shot in and around the Paris of the time. This film’s images of the future are, as often as not, actually representations of the present. Subsequently, again unlike practically all other future features, the film’s dystopian vision isn’t underscored by a vague message of ‘there’s trouble ahead if we keep on the way we are’: the trouble it tackles is not ahead, but already afoot.

Like practically all other future features, however, the film is obsessed with the dehumanisation wrought by mass media thought control. In Alphaville, the bedside ‘Bible’ kept in every hotel room is not a religious text but a dictionary of permissible words from which anything emotive – most obviously ‘love’ – has been deleted. Godard had already attacked the way contemporary Parisian preoccupations (and, in particular, advertising) were creating a generation whose minds fed only on ‘prefabricated thought’ in the previous year’s Une femme mariée, and the world of Alphaville presents the maturation of his ideas on the subject.

As always with JLG, it is the outstanding style that showcases these ideas that accounts for their terrific resonance. No other auteur has ever attempted such drastic lurches between pop iconography, contemporary political commentary and timeless philosophical argument as are routine in Godard’s work, and Alphaville embodies the confidence with which he makes them. Furthermore, no other auteur – not even Quentin Tarantino – has ever simultaneously followed, commented upon and re-invented cultural clichés with anything like Godard’s level of skill (or impudence). There is no better illustration of this than Alphaville‘s final scene, in which Anna Karina’s character speaks the words that must be the most frequently heard in film – and, indeed, in life – but does so in a manner so unusual, and so effective, as to turn the moment into one of cinema’s most exquisite endings. Here, for once, is a dystopian science fiction film as dramatically coherent and emotionally rewarding as it is visually impressive and thematically frightening.

Jean-Luc Godard was one of the standout artists of the last century: a director as innovative, influential and important as any in the history of film. Every film with which he is in any way associated is deserving of cineastes’ attention and intense academic analysis, but many of those made after his 1960s heyday are so esoteric as to be inscrutable even to devoted admirers thoroughly versed in his work. All those, however, that he made during the swinging decade with which he is, in cinephilic circles, synonymous should be studied and enjoyed by anyone with even a casual interest in the power and potential of film. And Alphaville is as fascinating as any of them.