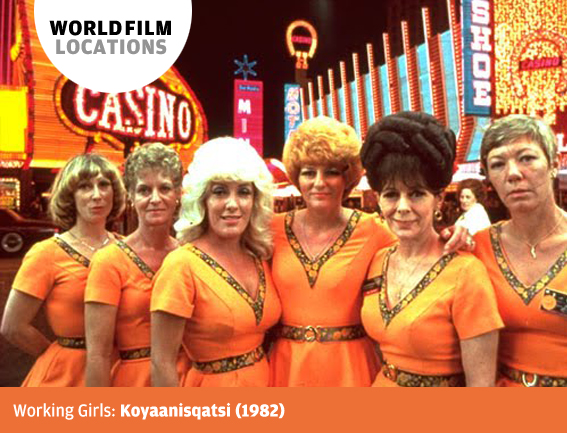 As we prepare for the publication of World Film Locations: Las Vegas next month – the latest in our series of books exploring the relationship between the city and cinema– Marco Bohr examines one of the many evocative moments in Godfrey Reggio’s masterly medidation of life, Koyaanisqatsi.

In Godfrey Reggio’s Koyaanisqatsi, a group of middle-aged Las Vegas waitresses look straight into the camera as they are captured in time lapse. This brief scene in Koyaanisqatsi adds to the film’s complex montage of visually arresting sequences that explore the condition of late capitalism. The position of the waitresses’ bodies in the frame and the fact that they are six neatly mirrors the six letters forming the ‘Casino’ sign displayed in the background. The garish colours of the waitresses’ hair, make-up and uniforms equally blend in with the vibrant lights of Las Vegas nightlife.

In photographic terms, this shot of the Las Vegas waitresses functions like an environmental portrait in which the subject is clearly depicted as a product of its social and economic circumstance. While the blinking lights of the casino signs represent the lure of hyper-capitalism, the waitresses, on the other hand, signify that beyond its shiny surfaces, the gambling establishments of Las Vegas are run and maintained by workers. The waitresses represent the human cost of Las Vegas as a postmodern construct of hedonism, indulgence and potential failure. The time-lapse shot of the waitresses suggests that while for most people Las Vegas is a tourist destination, it is also a real place of work in which a fake flirt or smile is necessary for making a living.