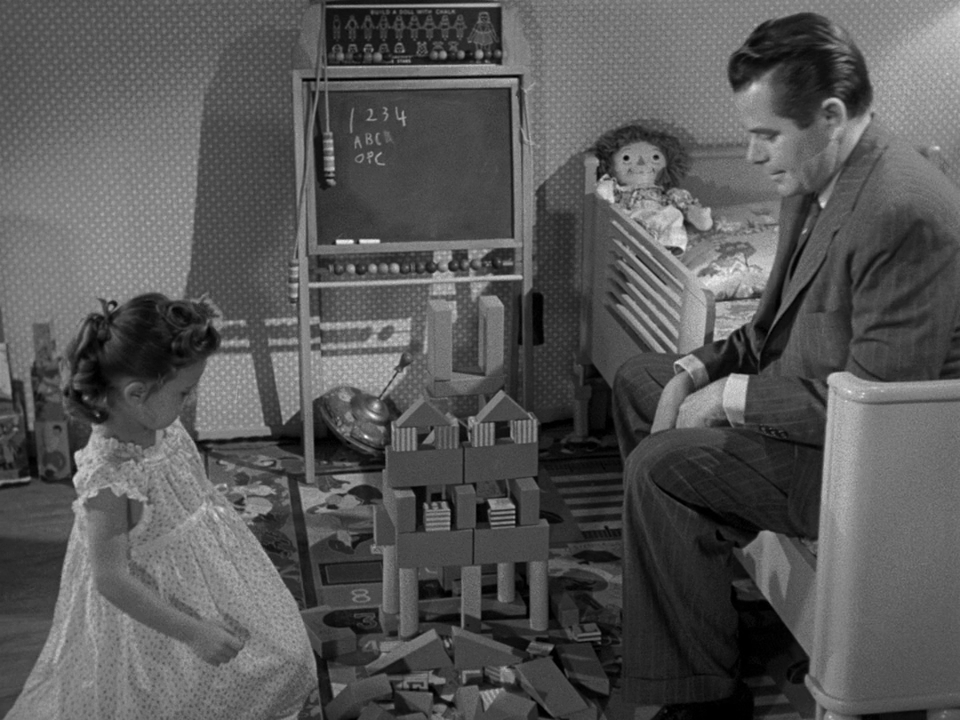 Discouraged and temporarily defeated, detective Dave Bannion (Glenn Ford) leans heavily, hands in pockets, against the doorway of his young daughter’s room. “That’s the most beautiful castle in the whole world”, he says, referring to the child’s impressive building block creation sprawled across the bedroom floor. She grins, immediately bounding up into her returning father’s arms, but not before correcting him: “It’s a police station, Daddy, just like you!”

This may seem a harmless, somewhat rudimentary scene – a way for director Fritz Lang to depict the ideal nature of suburban life, perhaps – but as with everything Lang touches, these scenes are always weighted, and so much more than mere narrative building blocks. Bannion deludes himself that both his daughter and wife exist in a world of leafy tranquility – of beautiful castles, if you will – when in reality, and as we later so tragically discover, this idea is simply not plausible. 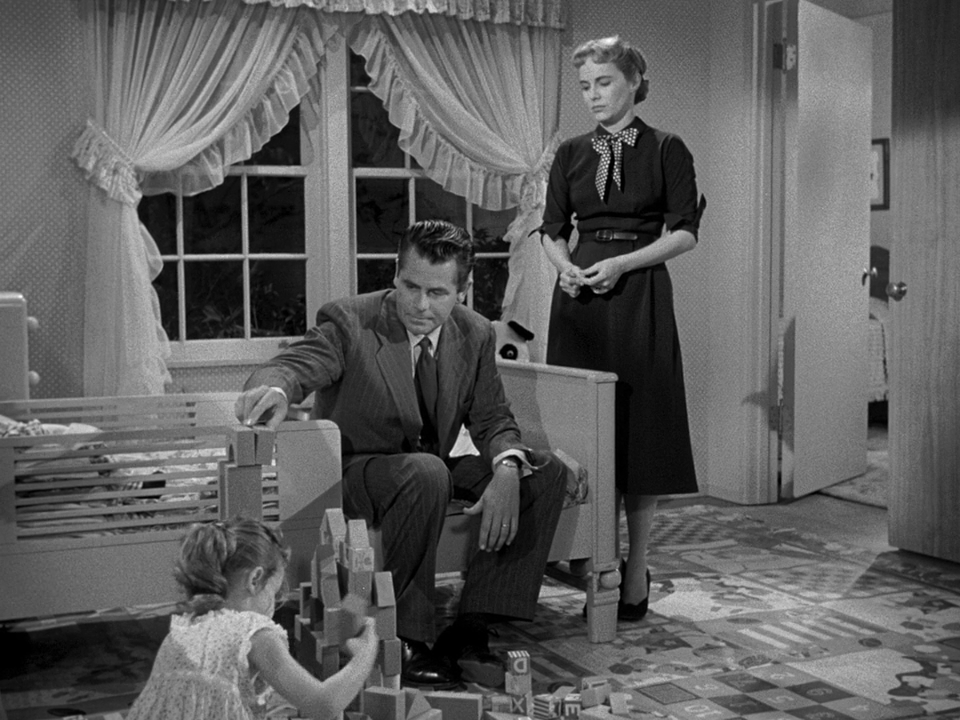 Those that he holds dear are just as much at risk from the stretching arm of corruption as he is, and perhaps even more so considering their relative lack of protection. It is the embattled detective’s shaking arm, however, that sends his daughter’s meticulously-placed wooden blocks tumbling, bringing the structure crashing down and causing her to cry. An act that clearly symbolises his own flailing, seemingly impossible quest: the maintaining of a world built upon the foundations of justice; one that weighs heavily on his shoulders and is crumbling around his ears. 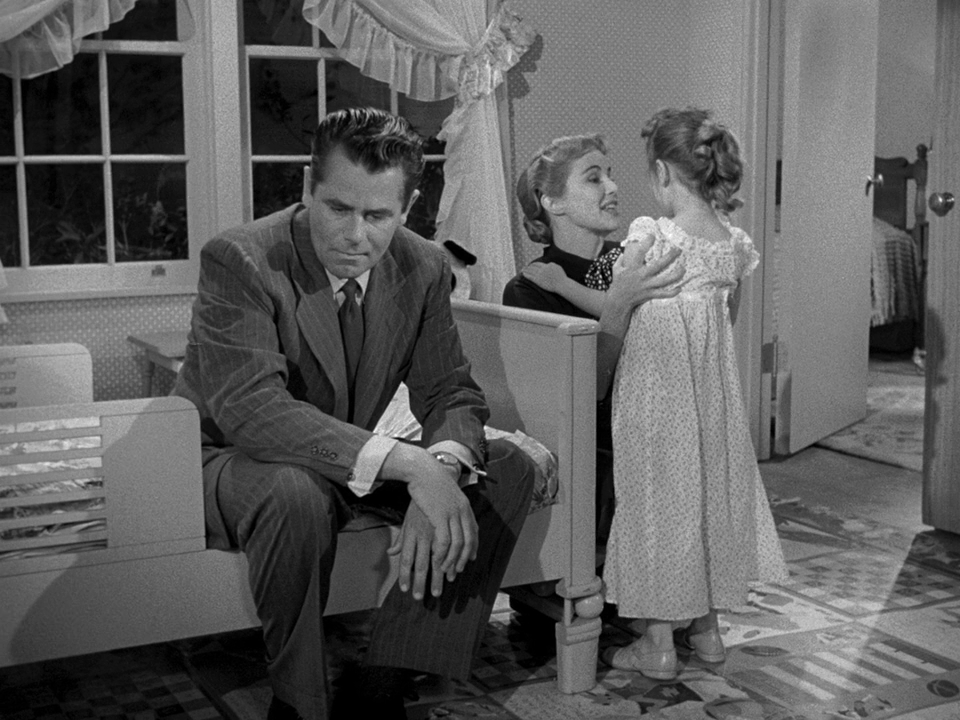 Looking at this scene from Lang’s The Big Heat in even further detail, there is much more to uncover. Bannion’s daughter cares about him just as he cares about her, illustrating this love with her building block creation. Yet, we glean more about these feelings towards her father from what it is she is creating: a police station, which suggests that she sees him as a police officer just as she sees him as a father. But then, that isn’t how she refers to her father. In what at first seems like an innocent slip of the tongue, Bannion’s little girl refers to her wooden police station as “just like” her father, rather than his place of work – the kind of grammatical error that any small child might make, right? And one that we might overlook if not attuned to Lang’s subtle approach to allegory. 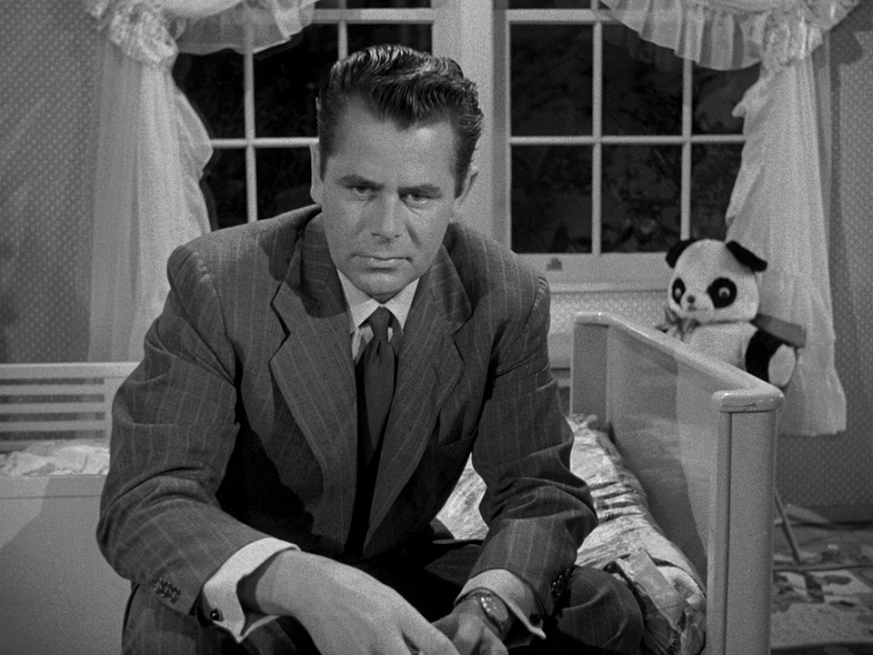 In fact, this seemingly inconsequential mis-line is one consciously placed there. It functions as a way to prevision Bannion’s diminution, without his loving wife to lean on, from that of a professional and family man to a mere badge and gun. Upon his wife’s death, and without her strong and loving support, Bannion’s daughter is sent away and he is allowed to fully immerse himself in this unenviable task of ridding the city of corruption. The little time he spends with his growing daughter is thus reduced to zero, and his function to that of a detective and nothing else.