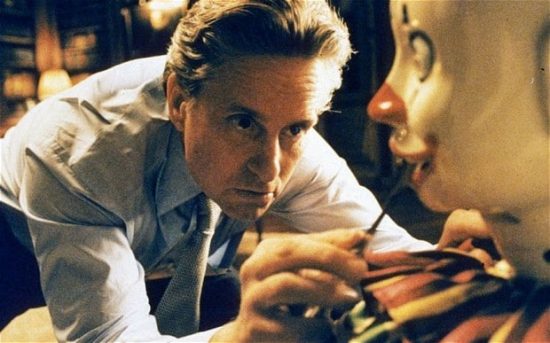 The Game is a film about awareness and relationships, with Nicholas Van Orton (Michael Douglas), a wealthy businessman protagonist who keeps the world at a considered distance.

Van Orton reduces almost all relationships to services – an that fits the capitalist economy in which he operates. His world is constructed of near-hermetically sealed spheres: the private mansion domicile, the chauffeur-driven car, and his offices in downtown San Francisco. For the first half hour of the film, the audience never sees Van Orton in a public space for longer than it takes to walk from a car to building. He may be presented as living in the world – he is, after all, a successful businessman – but this world is so narrowly defined that it has, from the outset, a certain unreality about it.

Having been given the gift of an unspecified ‘game’ from his younger brother Conrad (Sean Penn), Van Orton finds himself gradually questioning the secure limits and foundations of his existence. Fincher succinctly captures this journey from detached certainty to engaged curiosity with a short sequence that occurs immediately after Van Orton has discovered that the ‘game’ is on.

For the first time, the audience is shown Van Orton operating in the outside world – even if that world is mainly an airport terminal. Fincher continues the mood of surveillance from an earlier scene by positioning his camera inside the terminal building, looking at Van Orton through glass as he gets out of his car. The camera then tracks in sync with him as he makes his way to the terminal entrance.

On entering the terminal building, the camera rounds on Van Orton and reverse-tracks, so the audience is watching his face as he moves into this bustling interior. Fincher then slows the image, as a fragile crystalline piano score is heard on the soundtrack, alongside isolated sounds such as the echo of his footsteps, and the urgent whispering unseen people. New senses are being woken.

We’re shown Van Orton’s growing sense of awareness through cutaways to things he sees: a pilot on the phone turning away from his gaze, a janitor using a key on a locked door, a tall man and his female friend staring intently at each other. In less than 30 seconds of screen time, Fincher has thoroughly disrupted the excessive formalism of the film’s opening half hour, while showing the audience that Van Orton is changing: he is becoming engaged with a world he previously kept at a distance.

Granted, this is all due to his belief that he is playing a ‘game’, but it also finds a deeper resonance when considering the home movie footage inserts of his childhood and his late father, from the film’s opening. In that footage, a young Van Orton is shown to be connected to others, to be part of a livelier more chaotic world, a world that he disassociates with after death of his father.

When Van Orton finally finds somewhere to sit close to the boarding gate, Fincher gives the audience another tightly compressed transition moment. Using a wide shot of the boarding gate, we’re shown people dotted around on various seats, and the terminal building pulling away to a deep perspective point on the horizon line. Fincher takes the action from the mobile, to the sedentary; from social, to the personal. Only the waitress is active in this shot as she walks between the rows of chairs with a tray.

Van Orton is shown from behind in this wide shot, before Fincher cuts in closer to the opposite row of seats and focuses on a bearded man sat there. Using the walk of the waitress across the frame, Fincher discretely allows the audience’s attention to focus on this man, as we later become aware Van Orton’s has.

Previously, Van Orton’s focus was almost always locked on to one particular thing, usually a television, or a business partner. Here, we see his attention migrate across the space, from person to person and object to object, as he gradually becomes a part of the ‘real world’ and its revelations.