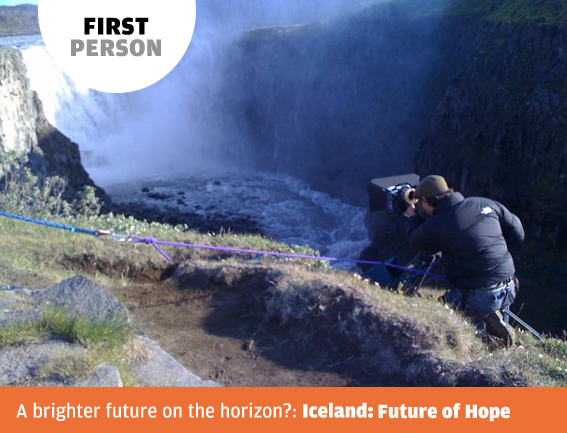 The continuation of an interview with Heather Millard, producer of Iceland: Future Of Hope.

Do you get a sense that Iceland’s filmmakers have a role to play in pulling the country back from the brink?
We strongly believe that Iceland’s filmmakers can play a strong role in re-building Iceland’s economy not only through potential income to the country but also the way in which they can represent the country and help to define Iceland again as a beautiful country with so many opportunities. Since the economic crash filmmakers in Iceland have had many set-backs, the Icelandic Film Fund received a massive cut in their 2010 budget when it was slashed by 24%, when all other arts funding was cut by no more than 6%.  On top of this their national broadcaster RUV declared that they will not commission any Icelandic Productions in 2010.

Ever since day one, we knew fundraising for Future of Hope would prove somewhat difficult.

We have self-financed the film to date, all of our crew believe in what we are making and have all in one way or another sacrificed something to help make this film possible, a true sign of dedication we feel. With the funding cut-backs of the Icelandic Film Fund and the large amount of debt that we are now facing, we can now relate in some way to how Icelandic filmmakers are feeling today. However, we will stop at nothing to ensure that ‘Future of Hope’ gets finished and released on time.

We launched the project with a target of raising $10,000 in just 40 days. If we don’t reach the target we don’t receive any of the money – however, if we manage to exceed the target we can keep collecting the excess funds. We have been actively contacting Icelandic Embassies throughout the world to try to generate publicity about our fundraising efforts and have had a great response, several Icelandic Societies in the USA are interviewing us about the film and fundraising and this will go out in their newsletters. People really are helping to spread the word and we only hope that enough people hear about it and support us within the time.

Aside from Kickstarter, we still do not have a leading sponsor, or in fact any sponsors for the film at all and would welcome any corporate or individual sponsor(s) with open arms. We can offer them the opportunity to get a press mention worldwide, an end credit and logo on the film which is already due to be broadcast in Iceland, Norway, Sweden, Netherlands, Greece, Canada and New Zealand to name but a few countries. An opportunity for any company to be associated with a ‘positive, good-news’ film about Iceland which will be shown to the rest of the world. I’m sure the right corporate sponsor is just around the corner, but we are yet to find them!

Do you see the finished film fitting into the growing post-Inconvenient Truth pattern of eco-message documentaries or will it offer more than that?

All filmmakers probably think that their film is special but we believe that although ours is not pretending to be cutting edge it will offer the audience a refreshing change from the documentaries that they’re used to. Put it this way, it’s not Michael Moore or Louis Theroux nor is it a Greenpeace advertisement!  It will be a piece of modern cinema that reflects the traditions of documentary making but incorporating a large element of animation and a beautiful score whilst telling a subtle story of optimism and hope. It will be a film that allows the audience to soak in the sights, sounds and people that make Iceland such a magical and inspirational place.

Are you planning a premiere screening in Reykjavik?

We plan to premiere the film in Reykjavik on the first Thursday in May, so please keep an eye on the facebook group for the confirmation of the premiere date, venue and further screenings thereafter.