In Akira Kurosawa’s Red Beard (Akahige, 1965), Dr. Niide (Toshiro Mifune), called “Red Beard”, offers medical treatment cheaply or for free in Edo (as Tokyo was formerly called) in the first half of the 19th century. The nickname Red Beard hints at “red medicine” (komo i gaku), designating the treatment practised by the Dutch (the “red-haired”, as Japanese called people from Northern Europe), who were the only foreigners allowed on Japanese soil after the country closed its borders in the 17th century. It was in their trading post on Dejima in Nagasaki Bay that Yasumoto (Yuzo Kayama), a young doctor who starts working with Dr. Niide, studied medicine. Although the film is shot in black and white, Kurosawa had asked Mifune to dye his hair and beard red, highlighting the symbolic reference to the main character’s nickname. Not unlike other medical doctors in Kurosawa’s cinema, for example Dr. Sanada (Takashi Shimura) in Drunken Angel (Yoidore tenshi, 1948) and Dr. Fujisaki (Mifune) in The Quiet Duel (Shizukanaru ketto, 1949), Dr. Niide represents the ideal of a doctor for whom medical treatment is a humanitarian task.

Dr. Niide’s fight for the life of a patient is depicted very vividly through camera movements and acting during the operation scene in which a female patient continues to struggle despite being tied down and sedated with a herbal-induced anaesthetic. Dr. Niide, his face distorted by the great effort to save her life, performs the operation on the body of the severely wounded woman with energetic movements. Humour – the arrogant but unexperienced Dr. Yasumoto fainting – negates any sentimentalism or pathos. This scene not only shows that surgery is brutal but is also an illustration of the fact that – following Zen Buddhist teaching, which values action over theory – Kurosawa’s doctors are clearly men of action. In a dialogue with the owner of a brothel Red Beard describes his work ethos. In his reply to the woman’s menacing words “Do not come without my request or permission,” he states: “I am a doctor and I come as long as there is a sick person.”

Dr. Niide’s compassion and his determination to combat disease are also revealed in the way he runs his small clinic. He pays great attention to hygienic measures, with his patients’ rooms on the sunny side of the building whereas he and his two assistants live on the humid northern side. He shares the frugal lifestyle of his patients, who come from a poor neighbourhood. These measures are, however, criticized by some of them, who complain about the strict rules of hygiene, even calling him a dictator. Dr. Niide is certainly authoritarian and sometimes rude, but his compassion is beyond question. There are moments of great tenderness; for example, in the way he shows concern when looking after Yasumoto, whom a mentally-disturbed female patient first seduced and then tried to kill. Mifune’s performance makes the viewer feel Niide’s almost paternal concern for the young man as he sits patiently at his sickbed. In another crucial scene, Dr. Niide shows infinite patience with a young rebellious girl to whom, after several unsuccessful attempts, he finally manages to administer medicine by surprise. 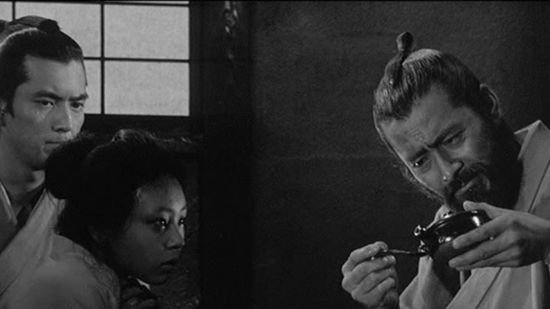 Dr. Niide, interested in the relationship between body and soul, takes into account the life stories of his patients, which are told in flashbacks. “There is always some story of great misfortune behind illness,” he says, and his concern goes far beyond medical care. He helps a destitute young woman who has wounded her drunken and abusive husband with a knife – blackmailing a magistrate to have the charges against her dropped and giving her the money he receives from the magistrate. He also rescues a 12-year-old girl from slavery in a brothel. His patients are those living in the social margins, and, seeing poverty as a main source of illness, he is prepared to fight the entire political system: “What has policy ever done for the poor?” His hardly suppressed anger explodes when, raising his voice, he calls politicians who have cut the clinic’s budget “irresponsible”. 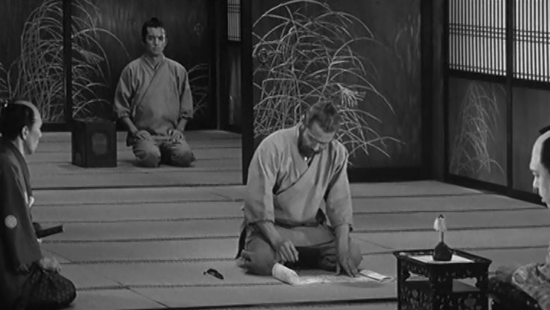 In the context of the 1960s and Japan’s economic recovery, Kurosawa is here pointing a finger at continuing poverty – on a material as well as on a spiritual level. He contrasts Dr. Niide with the ambitious Yasumoto – whose aim is to become the doctor of the shogun and who rebels against Niide’s authority – and with those doctors who simply enjoy their prestige and exploit their patients. However, this idealist is also a realist who treats a number of illustrious patients in order to finance his good deeds. One of these patients is an obese, high-ranking samurai. In a hilarious scene, this fat man trembles with fear in front of Dr. Niide, who prescribes a diet which consists of the kind and amount of food that the poor can afford. With a few determined and swift strokes of his pen, he reduces the opulent diet of the samurai to the low-calorie meals the poor have to live on. There is a moral lesson here, because gluttony goes against samurai values, which stress simplicity and frugality. Dr. Niide then goes on to charge his scared patient a horrendous sum for his services, something which shocks Yasumoto and the samurai’s chamberlain, who both witness the scene. 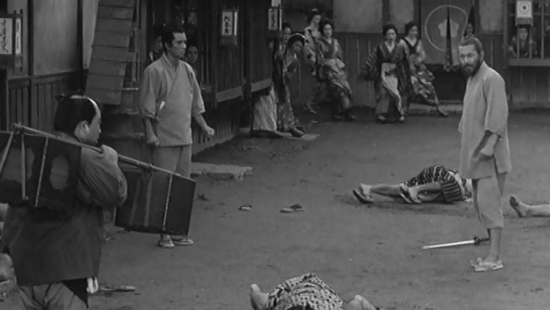 Dr. Niide’s determination to fight social ills – disease, misery, crime and corruption – is illustrated in the most spectacular way in the long sequence which takes place at the brothel. A group of grim-looking yakuza try to prevent him from taking the unconscious child prostitute away with him. With a few brutal blows and kicks, Dr. Niide deals with his adversaries one by one. We hear moaning and the snapping of bones. This fight scene, in which Niide demonstrates his physical prowess, creates an intertextual link as it is reminiscent of numerous duels in films in which Mifune played a samurai, a role with which he is closely connected. The stylized, slapstick-like violence, with bones breaking like matchsticks and an actor who performs his task with great joy, emphasizes just how much Kurosawa is playing here with stereotypes, at the same time revealing cinematic action as an illusion. The sequence ends on a humorous note that challenges cheap heroism when Niide, looking at the yakuza squirming with pain, states : “I may have gone too far. Too heavy-handed. This is awful! Such violence is bad! A doctor should not do such things.”

Dr. Niide is no saint, but he hates injustice and poverty so much, that any means are justified if they lead to a good result. His dedication to easing the suffering of his fellow human beings affects Yasumoto, who becomes his most fervent disciple. In Dr. Niide’s clinic, the young Yasumoto encounters not only the ugly side of his profession – the smell of the unwashed bodies of the poor, the blood and gore during surgery, the horror of death – but he also discovers his own humanity. Dr. Niide’s compassion and untiring effort represent a contribution to Kurosawa’s discourse on the human condition and the question of how to be a true human being, a never-ending discourse which has become particularly important for us today.