Summer is optimistic by nature. So am I. Maybe that’s why noir is my favourite film genre. Harking back to the past. The sensual, fatalistic bleakness. The subtle tone and mood. The quotable lines that float up into your consciousness and stick. The morally ambiguous hero, alienated from society, charismatic yet flawed, charting a course through a disillusioned life and towards a doomed fate often brought to him by the woman he falls for. The wrong kind of woman, who entices him in an illicit passion. She lives by night. She is not afraid to walk alone down the empty streets under dimly lit lamps, nor to meet him in the darkest alleys, in pursuit of security, luxury and furs. White is not her colour of choice. But blood-red lipstick is.

Far from finding film noir heavy and gloomy, I rather regard it as a prime contributor to restoring the balance disrupted by the traditional notion of Hollywood happy endings. It is also the genre that offers the perfect contrast to my favourite season, to the bright and euphoric summer days. Watching noir films during summertime keeps me grounded: “Don’t kid yourself that this will last forever.” Because you almost do, don’t you, believe in an endless summer?

“I never saw her in the daytime”, says Jeff Bailey about his nemesis, Kathie Moffat, in Out of the Past. “We seemed to live by night. What was left of the day went away like a pack of cigarettes you smoked. I didn’t know where she lived. I never followed her. All I ever had to go on was a place and time to see her again. I don’t know what we were waiting for. Maybe we thought the world would end.” Those lines epitomise the essence of the film noir love story. Here are four femmes fatales who commanded the screen with ferocity… while wearing white, either almost entirely or in pivotal moments of these films. 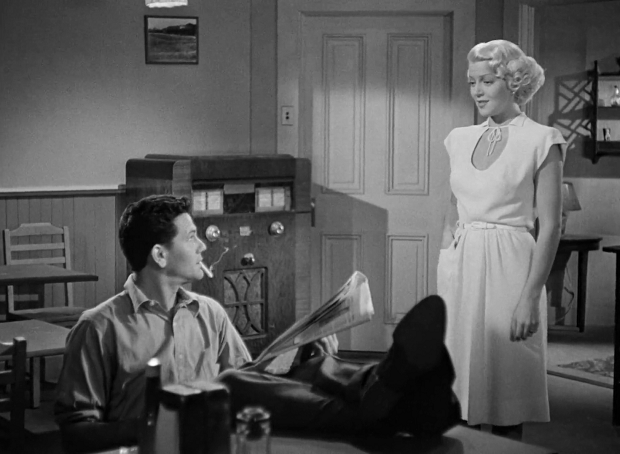 Unlike any other femme fatale, Lana Turner wears white almost exclusively in The Postman Always Rings Twice. One major reason was to get the film past the censors. “At that time there was a great problem of getting a story with that much sex past the censors. We figured that dressing Lana in white somehow made everything she did seem less sensuous. It was also attractive as hell. And it somehow took a little of the stigma off of everything that she did,” said the director, Tay Garnett, in the book “Lana: The Public and Private Lives of Miss Turner”, by Joe Morella and Edward Z. Epstein.

Be that as it may, it doesn’t lessen the great impact that Lana’s white wardrobe had on the character and on the plot. Dressed in immaculate white (costumes by Irene), Cora is making you doubt her dark, murderous impulses. She doesn’t seem to be evil, at least not by her own flawed character, but rather by fate, and she showcases such a wide range of emotions throughout the film, that she almost manages to get us on her side. I think the element of white (I was stricken by it the very first time I watched the movie) and Lana’s interpretation, with her icy looks, withering glances and undeterred determination (“I want to be somebody.”), are two of the movie’s strongest points. She is the focal point of every scene. 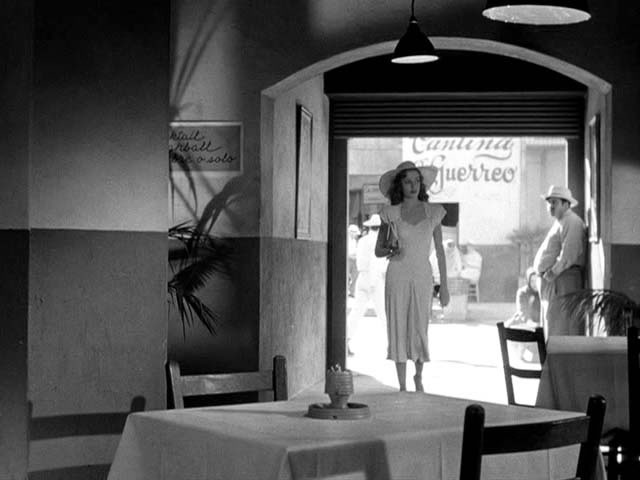 When Kathie Moffat walks out of the sun and into a Mexican café, dressed in white, in a feminine, square-necked dress (costumes by Edward Stevenson), she looks like Jeff Bailey’s dream come to life, not the messenger of his downfall that she really is. “And then I saw her coming out of the sun, and I knew why Whit didn’t care about that 40 grand.” She has the appeal and darkness, the beauty and brutality of the authentic femme fatale. Few others, if any, have achieved this. No foolish flirtations, no sentimentality, a chilling composure. She just goes after what she wants. It’s in her blood.

Such is her on-screen persona that even when Robert Mitchum knows she has double crossed him and seems to genuinely make future plans with his present girlfriend, we cannot be confident that, eventually, he will not end up with Kathie. And we remember that early scene after they meet in the Mexican cafe, when she describes the night spot where he might feel more at home, and as she turns to walk away she tells him, “I sometimes go there”. No matter what he does from that moment on, we sense his fate has been determined. 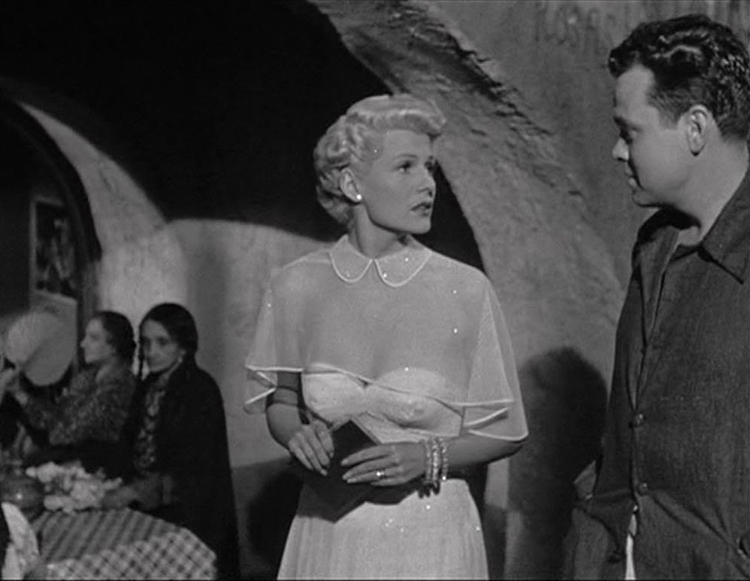 Rita Hayworth as Elsa Bannister in The Lady from Shanghai (1947)

The hall of mirrors climax in Orson Welles’ The Lady from Shanghai is one of the greatest scenes in cinematic history, but Rita Hayworth’s short-cut and champagne blonde-dyed hair sparked a fair amount of interest, too, not to mention controversy and shock. Elsa Bannister quickly takes control of the elaborate seduction game with Michael O’Hara (Orson Welles). The tropical landscapes and Elsa’s look, dressed accordingly in shorts and bathing suits, play their part. But it is that moment when she is wearing the shimmering, full-skirted white gown with a transparent capelet (costumes by Jean Louis), cloaking her in a seductive elegance under the moonlight, that seals O’Hara’s unreasonably stupid love for her.

Elsa Bannister is the enduring attraction of bad. We know we could all succumb to it at one point or another. As she explains, “One who follows one’s original nature keeps one’s original nature… in the end.” Elsa has no conscience anymore, but she is not necessarily unhuman by nature, rather the result of what others have made her (she was psychologically abused by her husband). Her duplicity and actions are not driven by a lust for power and money, like in the case of so many femmes fatale, but out of a need to square things out, even if that means becoming evil. “Maybe I’ll live so long that I’ll forget her. Maybe I’ll die trying.” 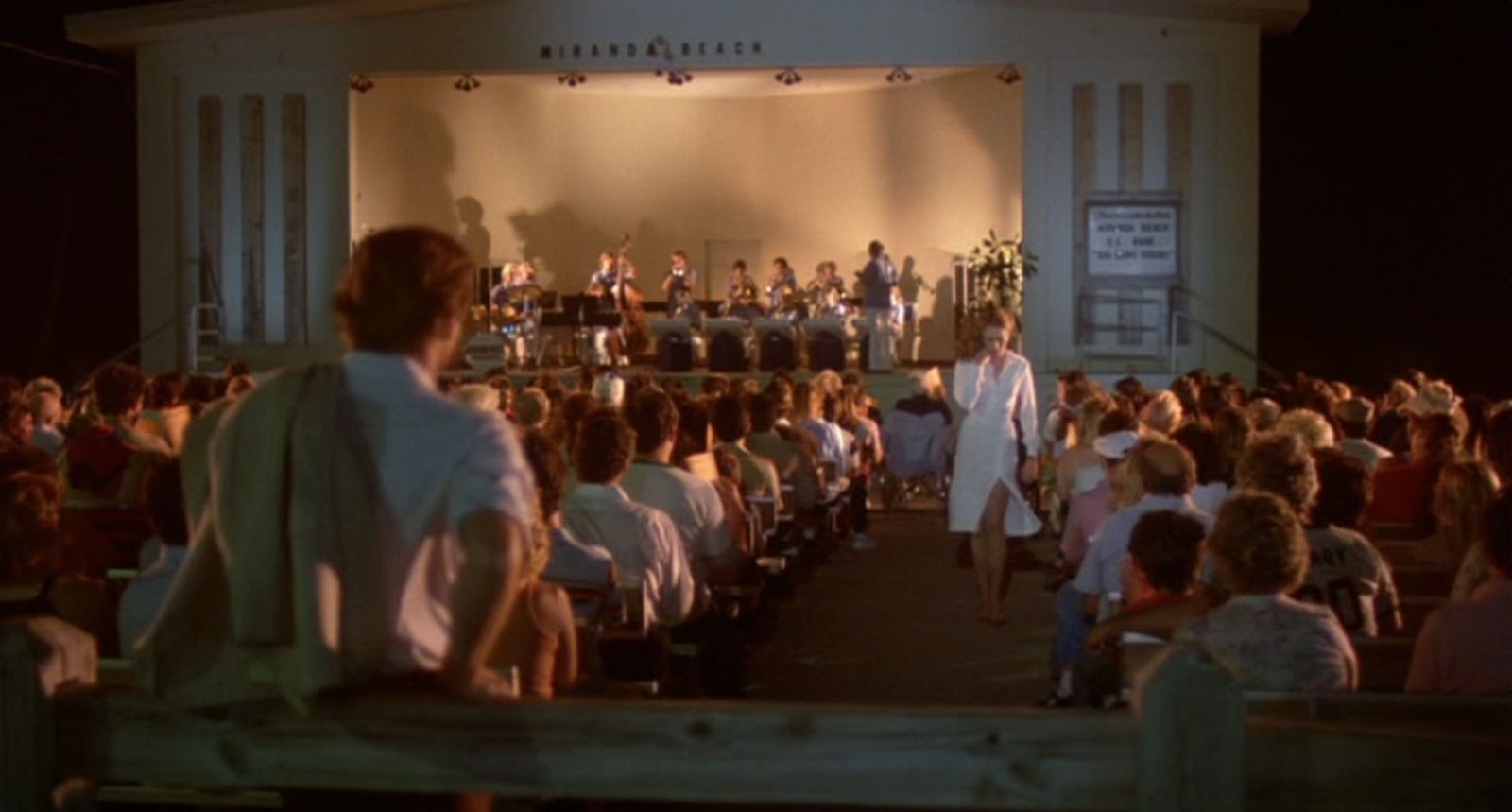 In neo-noir Body Heat, the centre of interest and power is the woman. Kathleen Turner’s entrance in her debut film informs us of that. Florida, during a heatwave. Ned Racine, played by William Hurt, a small-town shady lawyer, is strolling on a pier at night and finds himself behind the seated audience to an outdoor concert. Suddenly, a woman in white stands up, turns around and walks straight toward him, seductive, desirable, her clothes clinging in the sea breeze (costumes by Renie Conley). This is Matty Walker. To see her is to not be able to escape her. She knows it. It’s a ‘50s film noir atmosphere, but Body Heat does not seem to be aware of the classics that influenced it. It isn’t contrived or unnatural, quite the opposite. It can stand on its own. And much credit goes to Turner’s femme fatale: devious, greedy, entertaining, the real protagonist. “You aren’t too smart, are you? I like that in a man.”

photos: movie stills from: 1-The Postman Always Rings Twice (MGM) / 2-Out of the Past (RKO) / 3-The Lady from Shanghai (Columbia Pictures) / 4-Body Heat (Ladd Company)