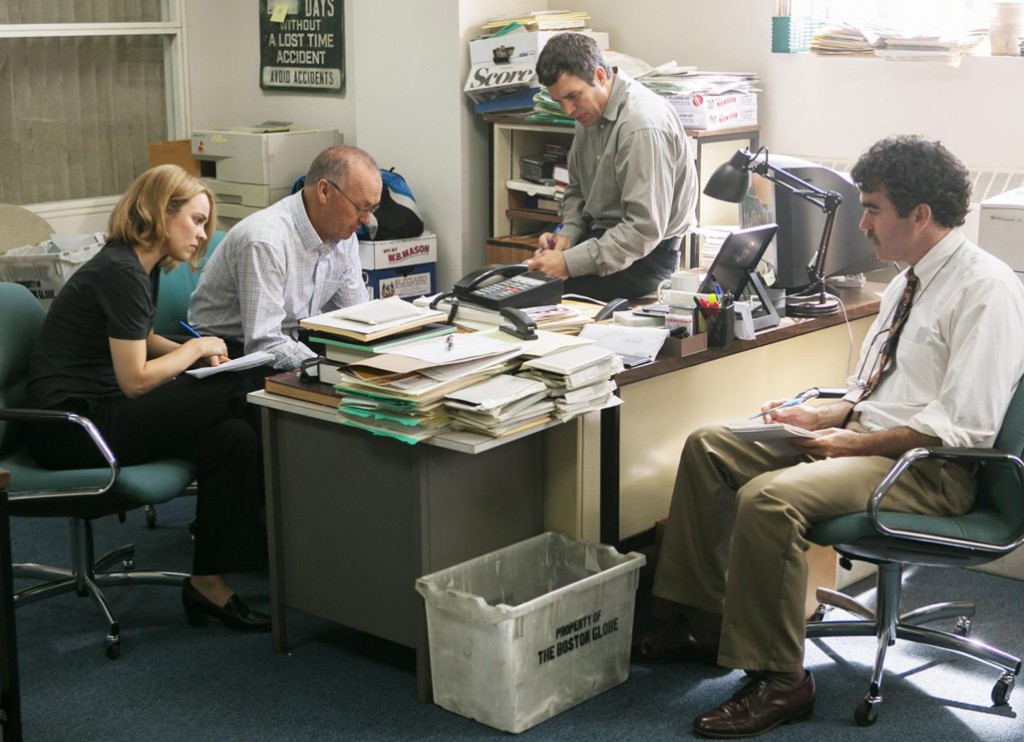 What do The Grand Budapest Hotel, The Great Gatsby, The Artist, Memoirs of A Geisha, Chicago and The Aviator all have in common? They are period movies which have all won the Oscar for costume design. In fact, over the last two decades, only two contemporary films have earned even a nomination: The Devil Wears Prada and I Am Love. In the entire history of the Academy Awards, considerably fewer contemporary movies have been recognised for their costumes. Present-day stories have always been underappreciated in comparison to the historical drama, fantasy and sci-fi genres. It is much harder, it seems, to get contemporary film costume right. In fact, it is much more difficult to convince a viewer of a costume’s plausibility in a story set within a familiar world, using a familiar attire. The wider role that clothes play in film seems to be often overlooked in the case of contemporary characters, forgetting that accuracy is not important in period productions alone and that, on screen, the most plain piece of clothing is not just a piece of clothing and that it can take on meaning. 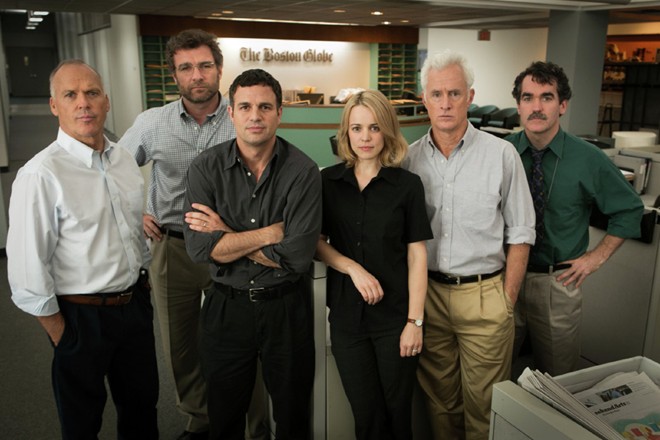 This year is no different. The Oscar for costume design will once again go to a period or fantasy film. But on the week of the Academy Awards, my attention goes to one of the year’s best films, Spotlight, in which clothes go unnoticed. And so they should, because therein lies their authenticity. They were made, chosen or recreated to reflect the real life protagonists of the story, the Pulitzer Prize-winning journalists from The Boston Globe who uncovered the decades-long child abuse scandal within the local Catholic archdiocese and the subsequent cover-up. The story is set in the late ’90s –a historical framework though not “period” in the customary sense. We get to see some wonderfully realistic ’90s styles, capturing the fashions of the times and, most importantly, the dressing style of journalists – they do dress like that, don’t they? – and of the real reporters involved in the story. “We shot our first week at the Boston Globe itself, in the physical building, and people said, ‘Oh yeah, that’s just what Sacha [Pfeiffer, played by Rachel McAdams] used to wear,’” says the film’s costume designer, Wendy Chuck, who scoured thrift stores for most of Rachel’s wardrobe, largely consisting of collared shirts and a black suit.

The research for the main characters’ looks was mostly done by working with the real life reporters, gathering details of the way they used to dress from talking to them and by consulting personal photos of theirs from that time. They are ordinary clothes, but nevertheless they have their own stories to tell. Those who wear them don’t really think of how they dress; they want to go by unnoticed and without anybody reading much into them, because they have a bigger story to tell. “There’s something so generous about the spirit of these people. My drive was to pay homage to journalism and who these people were, and what they did. I felt I had a responsibility to all these people living and dead,” Chuck said. 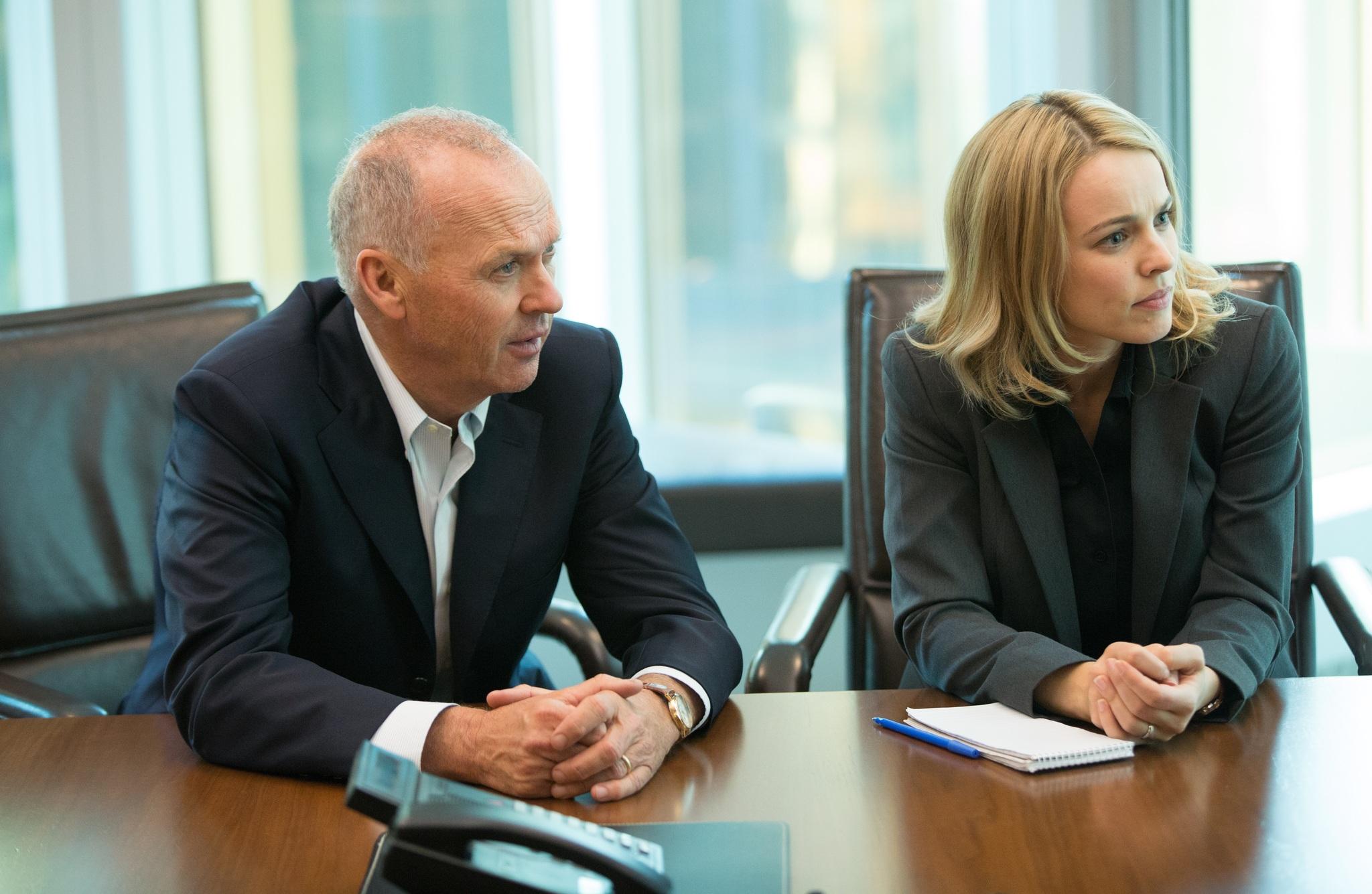 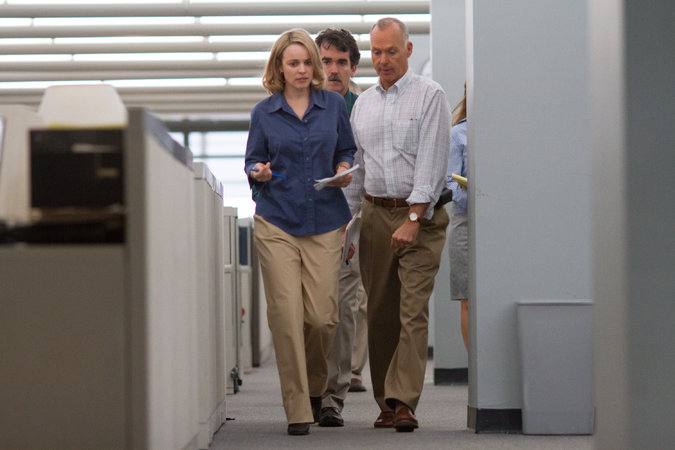 The ’90s Gap chinos that served as a model for the pair worn by McAdams’ character (even if contemporary costume is often shopped for, it is always adjusted to fit the actor and character) were also found at a thrift store. 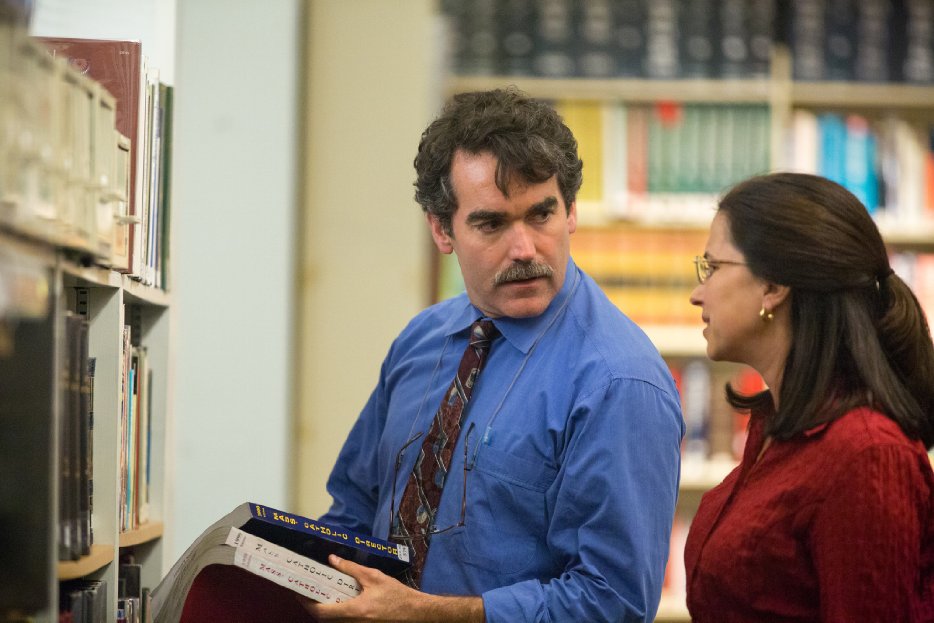 The men’s costumes – belted pleated trousers, slightly baggy, not exactly ill-fitting shirts, I remember this ’90s style well! – were also sourced from thrift stores, where Wendy Chuck dug out every Brooks Brothers shirt she could find (she also bought some contemporary shirts of the same label, but “never the slim cut”), as well as quirky ties for Brian d’Arcy James’s character, Matt Carroll. “He’s kind of the everyman, he could be any reporter anywhere of that era, with the moustache and his hair and his pants, and his solid-coloured shirts in maroon and green.” 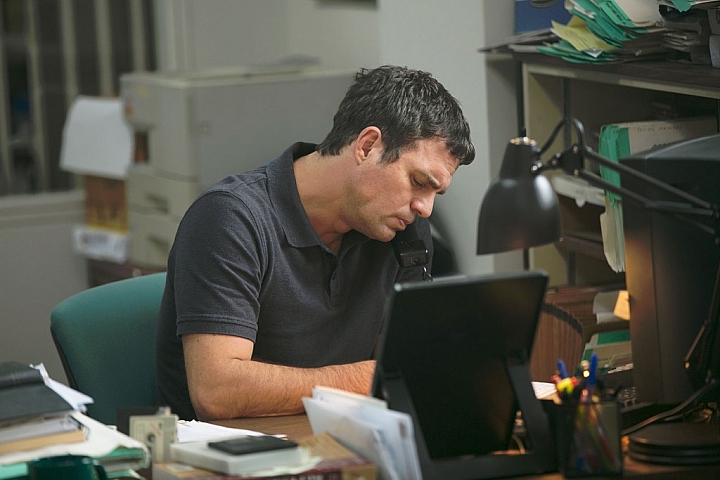 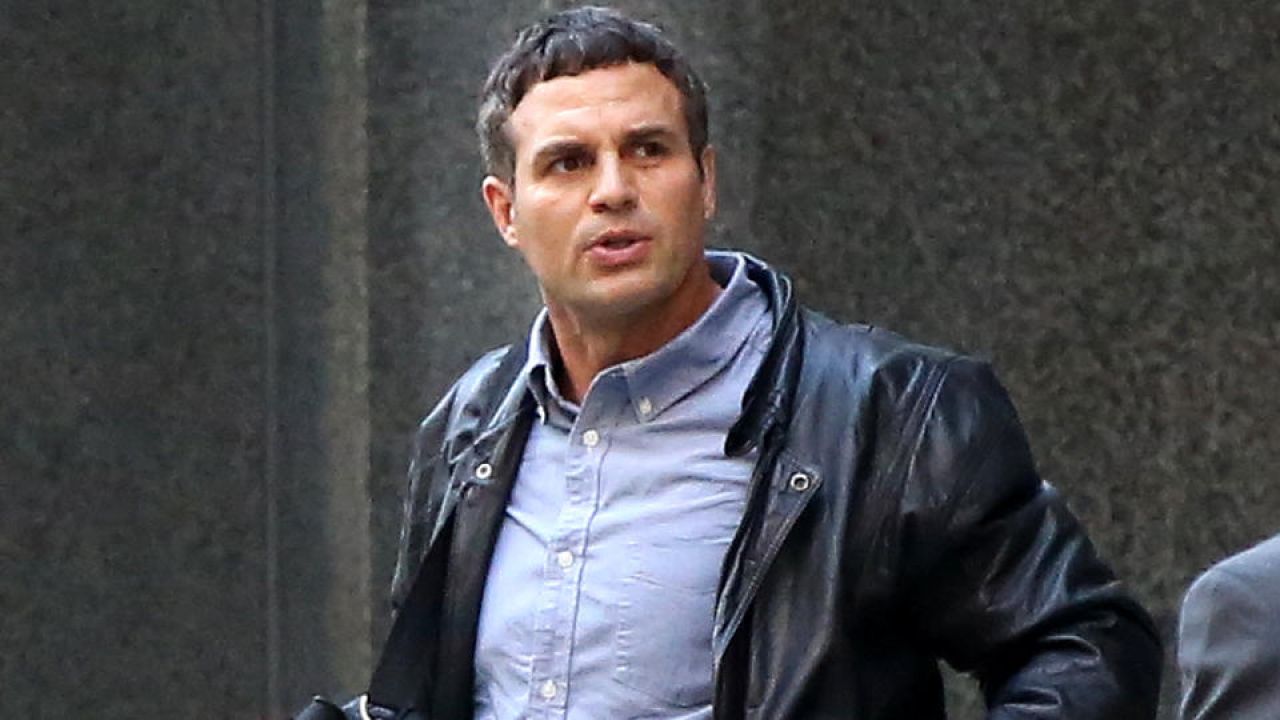 But it is “definitely preppy” that best describes the Boston reporter look, in the costume designer’s own words, defined by khakis, blue button-down and optional navy blazer. Comfortable, practical, real clothes in a real environment; classics that are mostly a non-factor in a story, but which always get the story right. 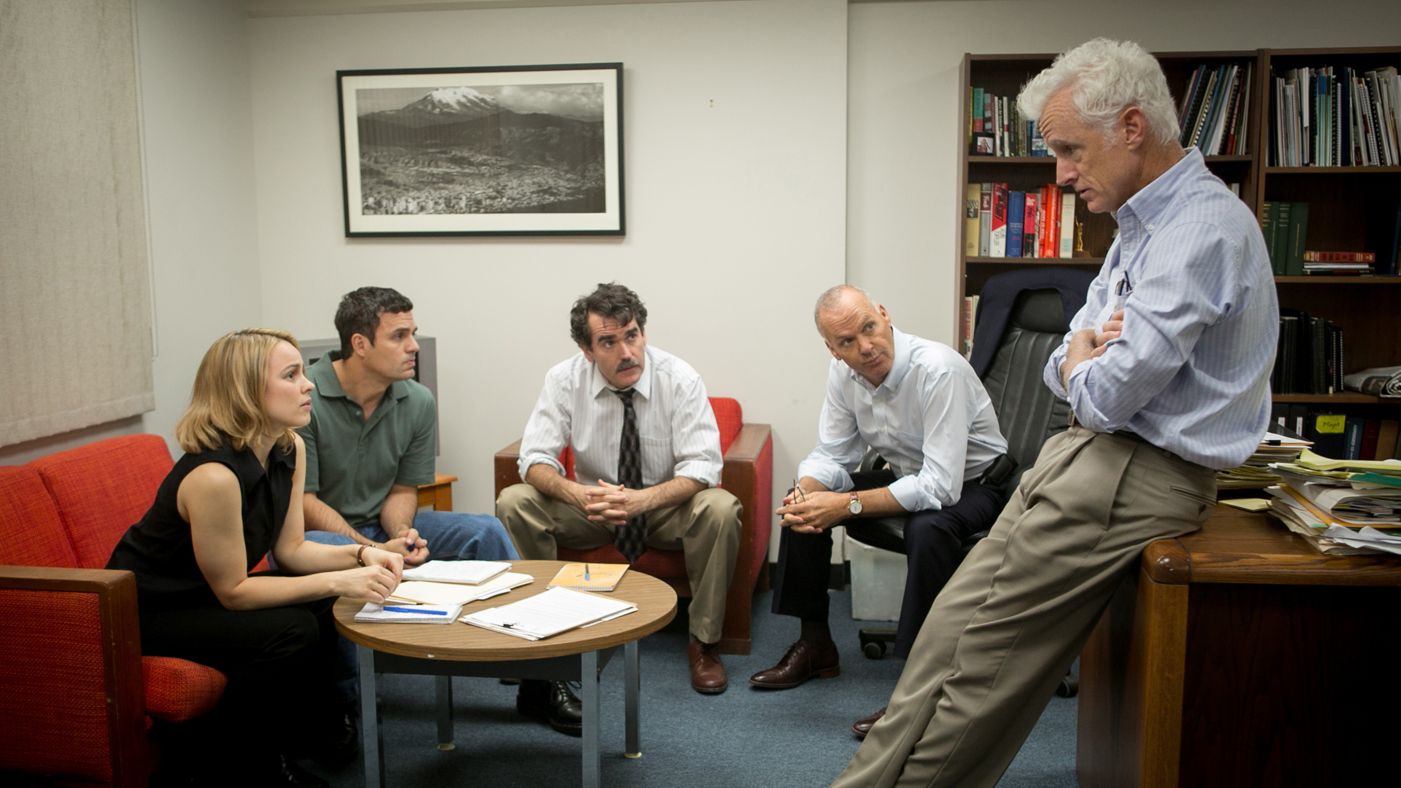 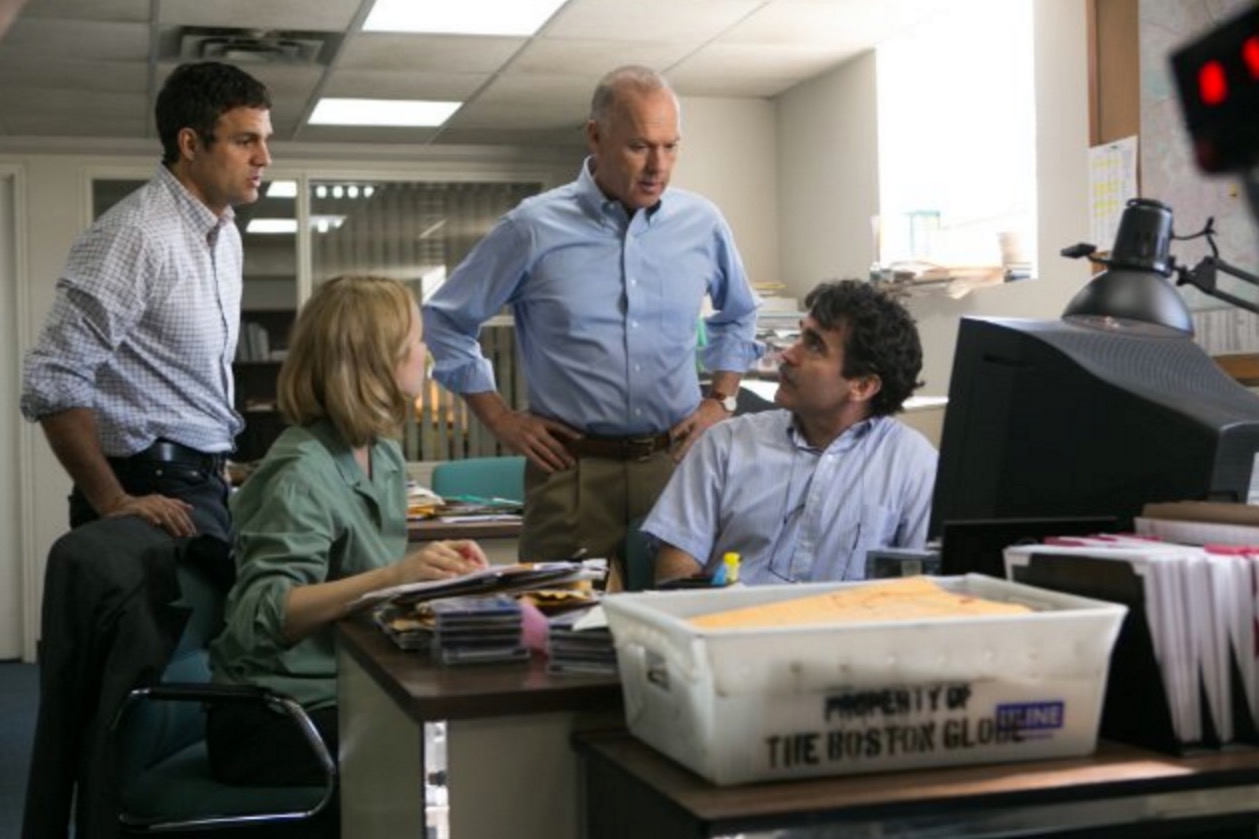