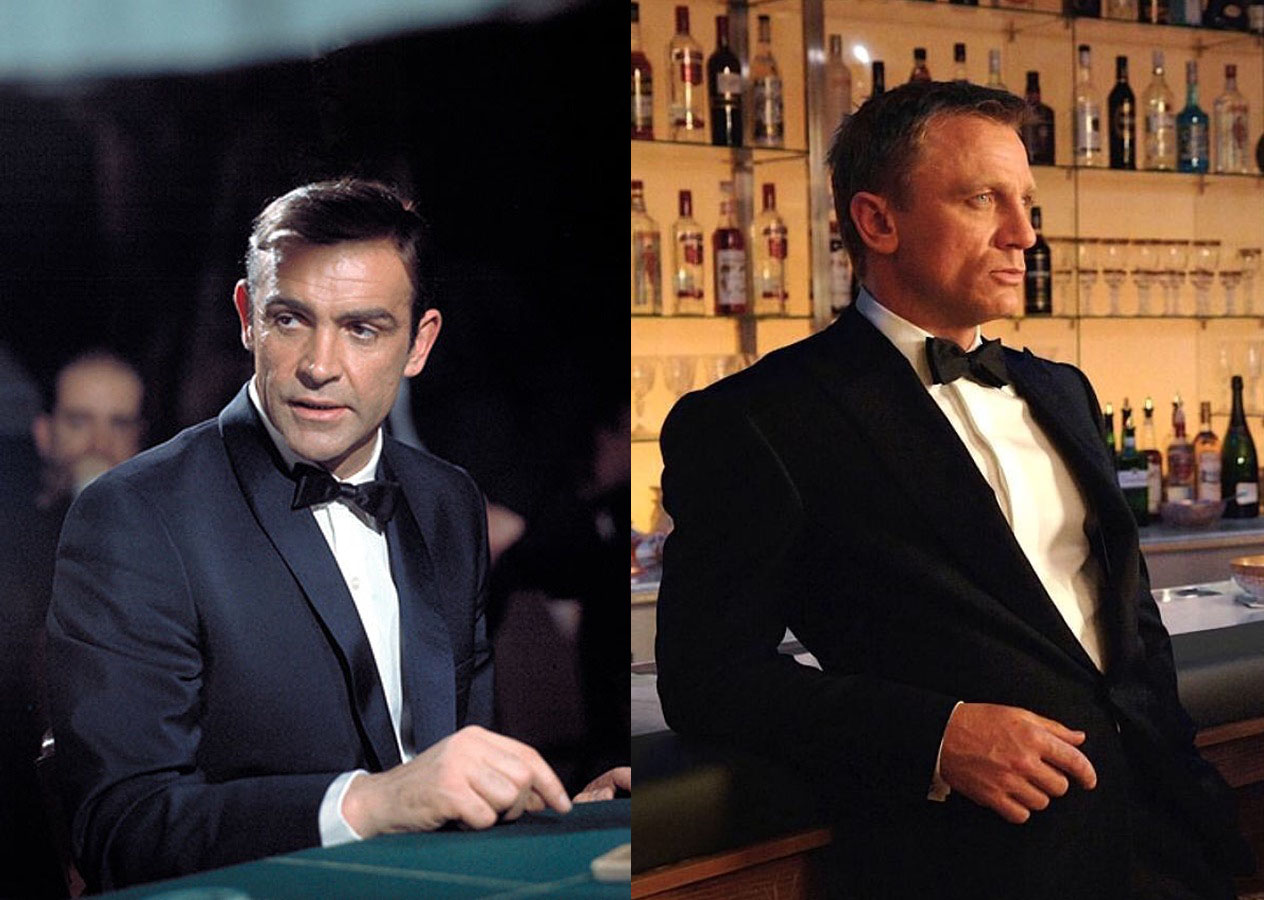 Men are lucky. Not only does an innate sense of style seem to run amok among our male counterparts, but should they ever feel short of sartorial inspiration, then they have James Bond to emulate. It is Bond’s legendary style that has us talking today – a style that pretty much had to be invented. Author Ian Fleming was reticent in providing details of how Bond dressed, suggesting however a perfectly tailored, distinctively British, but essentially low-key character. The one largely responsible for shaping James Bond’s persona was Terence Young, the director of Dr. No, who set the tone for the next fifty years of Bond’s understated elegance, a style formula carried out by his tailor, Anthony Sinclair, who created the now famous “Conduit Cut”. Sinclair took pride in how his clothes functioned like a second skin on Sean Connery. “Any well-made suit,” he told an ABC News interviewer in the 60s, “you should be able to take it, roll it into a ball, crush it, stamp on it, sleep in it, and then” – smoothing the narrow, impeccably draped lapels of the Sinclair suit he himself was wearing – “there you are, you’re back again, you see?”

Granted, Dr. No is a classic and still entertaining to watch, and it’s the simplicity and classic cut of the clothes that make the character still look fresh and up-to-date today. Sean Connery remains the man who defined the role.

This month, the new Bond movie, Spectre, is released. I don’t know whether any Bond will ever equal Sean Connery’s popularity, charisma and appeal (as Roger Ebert said, “Sean Connery was first to plant the flag, and that’s that”), but I’ve said it before that Daniel Craig makes a damn good modern 007. Before watching Casino Royale, directed by Martin Campbell, I had only seen a few classics from the series. It made me a fan and prompted me want to watch all the rest. Not only was it very good, but it was new, a new type of Bond film, with a story anchored in reality, steering away from many James Bond movie rituals, starring my favourite Bond girl ever, Eva Green, and a Bond who was darker, sharper, edgier and colder, but also more human than the earlier Bonds. We got to see Bond inventing himself. 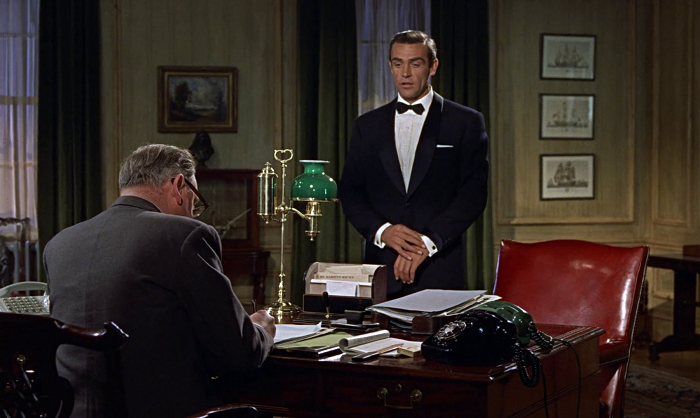 Sean Connery in Dr. No; Daniel Craig in Casino Royale. A coincidence, for sure, but I like the similar colour scheme in these two screen stills.

So here’s to the past and present of James Bond and his style, because we often look at the past to suffuse our departing ideal. And Bond’s modern style, although undoubtedly distinctive and different, is well ingrained in the original classic style of Sean Connery’s Bond, with many of Connery’s costumes finding a perfect correspondent (by no means imitation) in Daniel Craig’s.

As rightfully stated in Josh Sims’ Icons of Men’s Style, Fred Astaire may be the most famous wearer of top hat and tails, but Sean Connery’s Bond is probably the movie figure most synonymous with the classic dinner suit (or tuxedo, the term commonly used in the United States) – “a curio in the male wardrobe: a specialist item, yet designed more for effect than function, expensive, yet rarely worn, supremely elegant”, yet worn with the ease of a t-shirt by every Bond.

When we think of Bond, we think of the tuxedo. It’s how we first meet the character on screen, in Dr. No, in his Anthony Sinclair (who tailored Connery in all the Bond movies, from Dr. No to Diamonds Are Forever) signature midnight blue dinner jacket with a satin shawl collar (the most distinctive feature of the dinner jacket is the silk-, velvet- or grosgrain-covered shawl collar). It’s the image that establishes the James Bond look that has spanned decades and generations.

In his first Bond film, Daniel Craig wears a Brioni classic tuxedo. The shirt is from Turnbull & Asser, a brand that collaborated on the franchise from the very beginning. Casino Royale costume designer Lindy Hemming said about Craig’s formal wear: “For the evening suit, he [Craig] was happy to go with Brioni, the Italian design company we’ve used on the last four films, because he knows and likes their style. But, because of Daniel’s more muscular physique, the evening suit is a new shape, so he looks modern in it. It’s fashionable to wear suits at the moment, so it doesn’t look anachronistic, and Daniel likes the tailored look.” 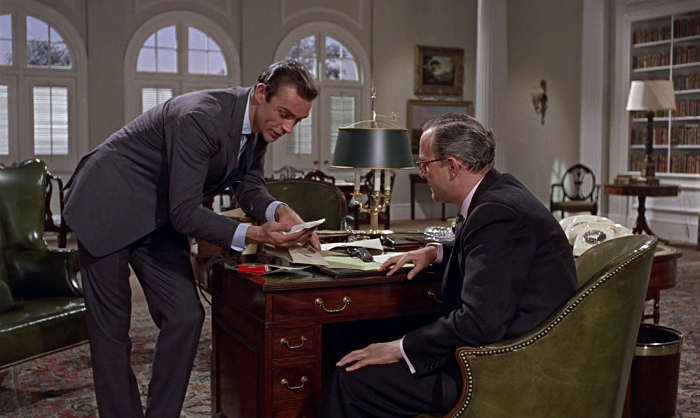 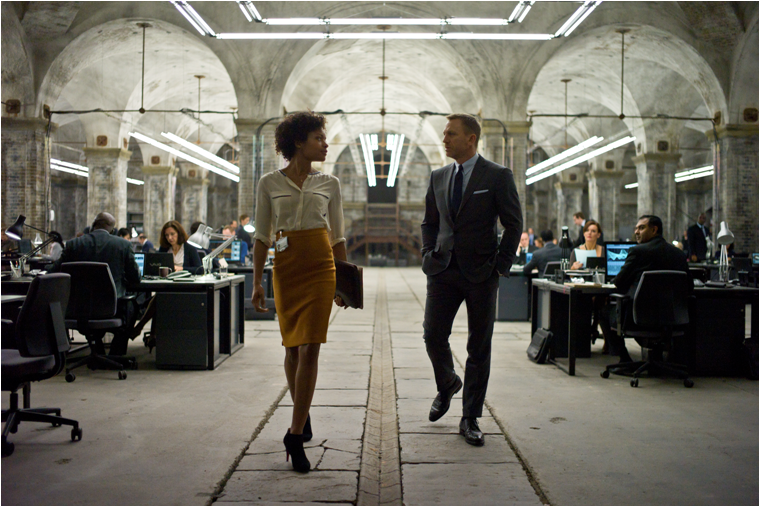 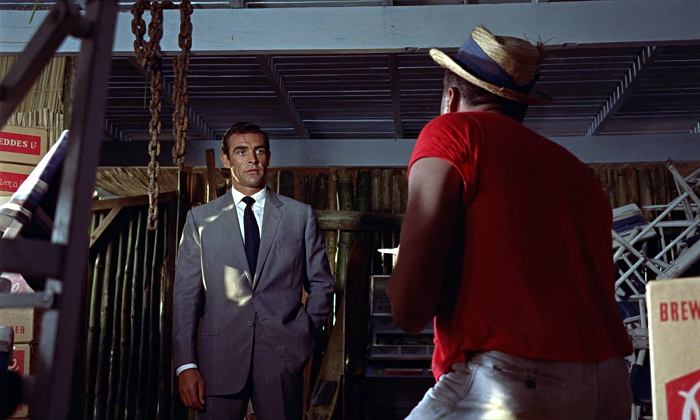 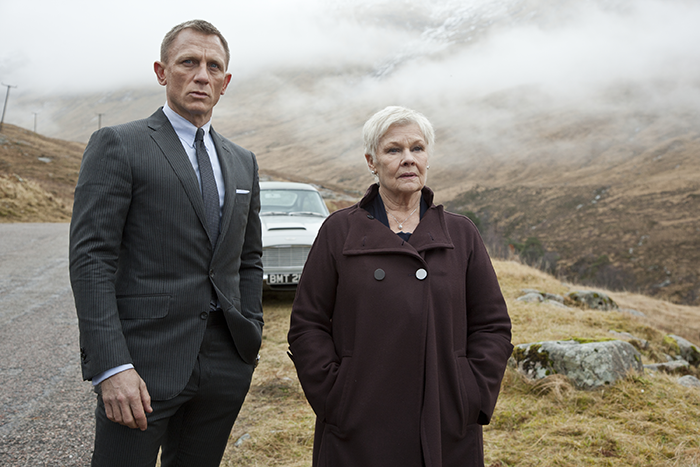 The grey suit, as worn by Sean Connery in Dr. No and Daniel Craig respectively in Skyfall. Different in so many ways, yet similar in styling: length of the shirt cuffs, light blue shirts, simple tie, missing belt.

One of the best, and best worn, grey suits in the history of cinema is undoubtedly Sean Connery’s light grey, light fabric suit in Dr. No. It says class with capital C. Grounded with a navy grenadine tie (a staple in Connery’s Bond wardrobe; the woven, knitted-like silk is luxurious, yet subtle) and a light blue shirt (his shirts are either white or pale blue, with spread collar and cocktail cuffs), both from Turnbull & Asser, the look is elegant, yet relaxed. Trouser pleats, shirt cuff links and jacket lapel widths have been added, removed and changed along the history, but, without having to go into designing technicalities, you always remark Bond’s tailored style as a whole – it impresses, stands out, serves as a tool for self-expression. There is one particular detail, however, that I would like to mention about Connery’s grey suit, one that I always like when it comes to formalwear: it eschews the belt, a very forward-thinking choice that helps not breaking down the outfit and keeping a lean line, and also eases the way the character moves – a must for 007 (the trousers are instead self-adjusting by button-tabs on each side, which keep them fit).

Costume designer Jany Temime collaborated with Tom Ford for Daniel Craig’s clothes in Skyfall. In an interview for GQ, she said: “I had a long meeting with Daniel and he told me what he wanted: a slim-fit suit tailored very near the body. Daniel wanted a suit you could forget – a suit that wasn’t on top of his body, but moving with his body. I wanted Bond to look perfect all the time, so I chose Tom Ford shirts that had a tab under the collar – great for the action scenes – and light blue and sky blue colors, because they go wonderfully with Daniel’s eyes. I also wanted a tie you could forget; I didn’t want Bond to be the guy with a tie that has a little square on it. Those are too loud, and you’ll just remember the wrong design. The trousers were flat-front and belt-less – [belts] are so nineties.”

The perfect classic wardrobe is how Tom Ford described Craig’s clothes in Skyfall: “I have been dressing Daniel for some time and know that he looks best when simply dressed, so we did some beautiful suits, tuxedos and daywear. We didn’t really modify our suits, as James Bond is a bit like our guy – classic and extremely elegant”, said the designer. Simple, elegant, understated and timeless is how Anthony Sinclair described his Conduit Cut. 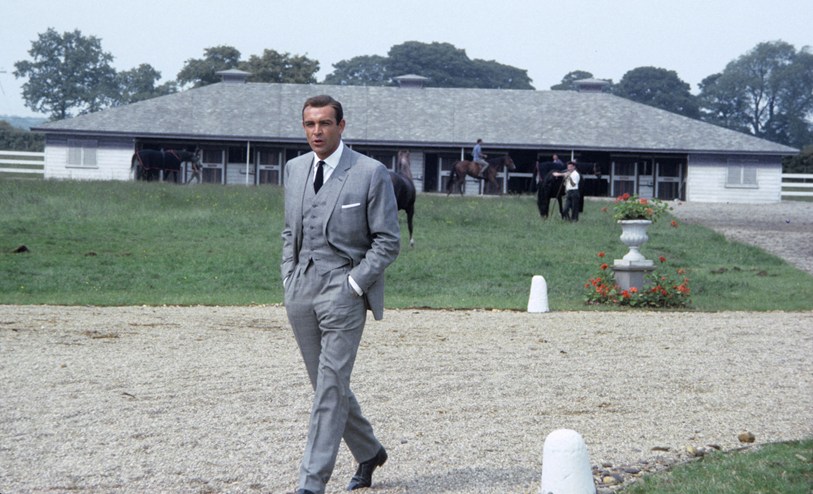 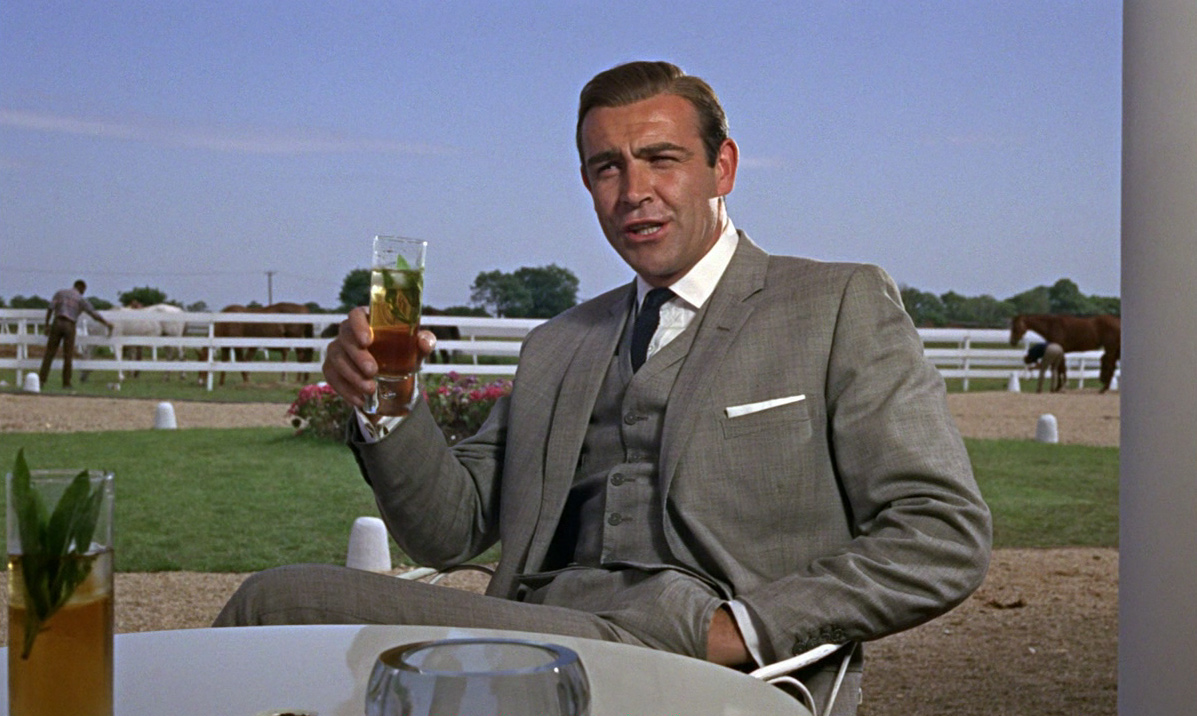 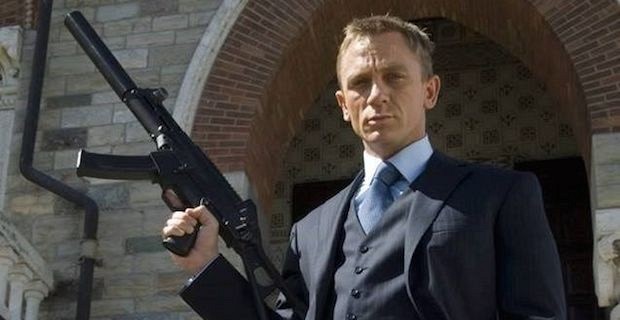 In Goldfinger, Anthony Sinclair was tasked with the tailoring again, dressing Connery in the iconic three-piece glen check tropical weave suit. The silhouette evokes the streamlined modern look of the 60s. He looked sharp and refined.

The three-piece suit (this time by Brioni) makes a modern comeback thanks to Daniel Craig in Casino Royale. A three-piece suit is as classic an item as you can get, but classic doesn’t mean it doesn’t evolve over time. A different basic style, a different silhouette and fit, and, not lastly, a different attitude turn it into a perfectly approachable and acceptable look for today. Surprisingly, I also like the choice of the (untrendy by 2000s standards) wide tie – it makes the entire look so put-together, so “I mean business”, sending Bond off on a path that we are more familiar with from all the other films. 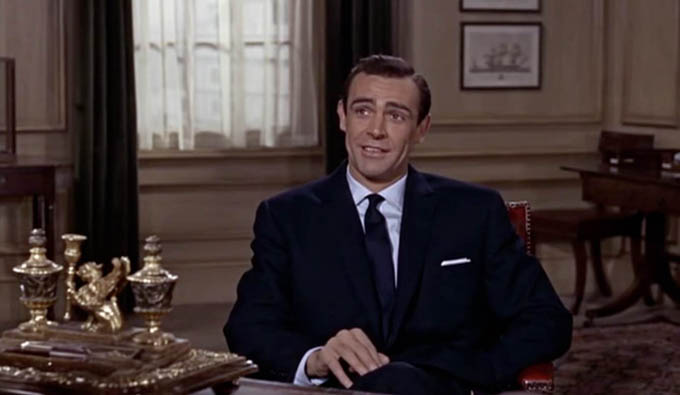 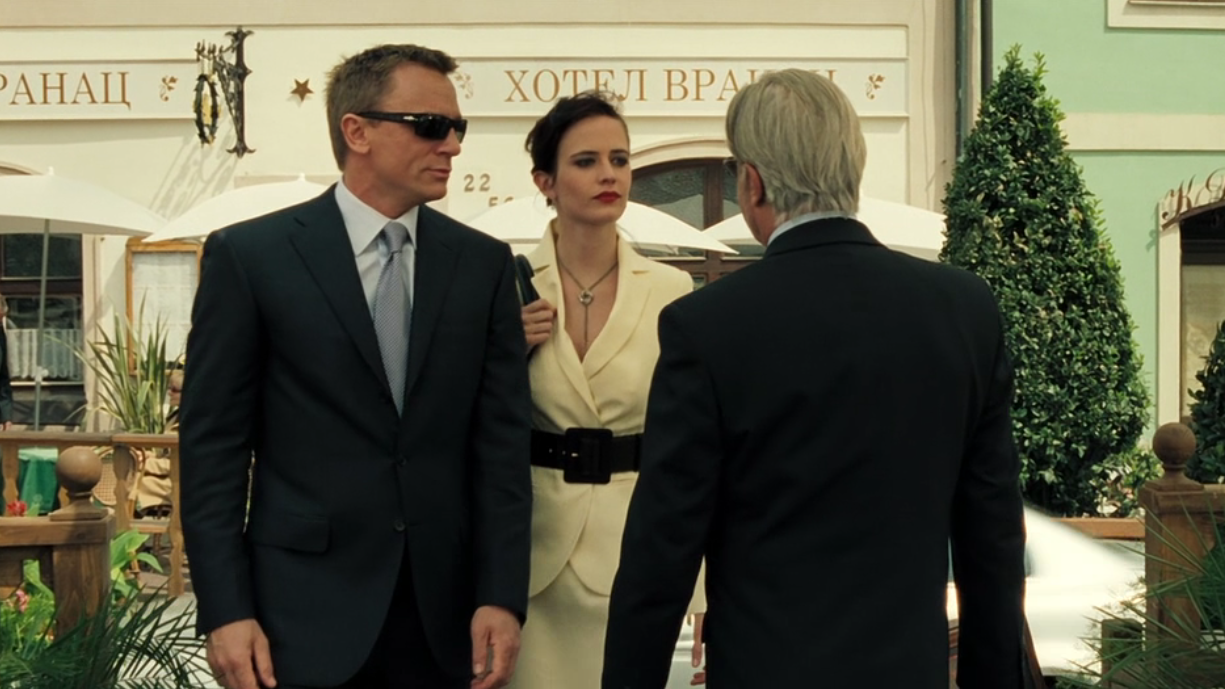 Sean Connery in From Russia with Love; Daniel Craig in Casino Royale

Sean Connery in a Sinclair suit again, in From Russia with Love. He exudes a classic, yet unconfined elegance. In Casino Royale, Daniel Craig wears a Brioni wool suit in a subtle charcoal grey and navy plaid. The shirt is also Brioni, in pale blue with light grey stripes, with a moderate spread collar and double cuffs with rounded corners. The shoes are black John Lobb Luffield derbys. “It’s the best thing that can happen to a man: a beautiful suit, a nice shirt, a great pair of trousers, and shoes that just look gorgeous. I hope that when they see Bond, they realise that you can have a really active life and look very sexy without looking confined” says costume designer Jany Temime. 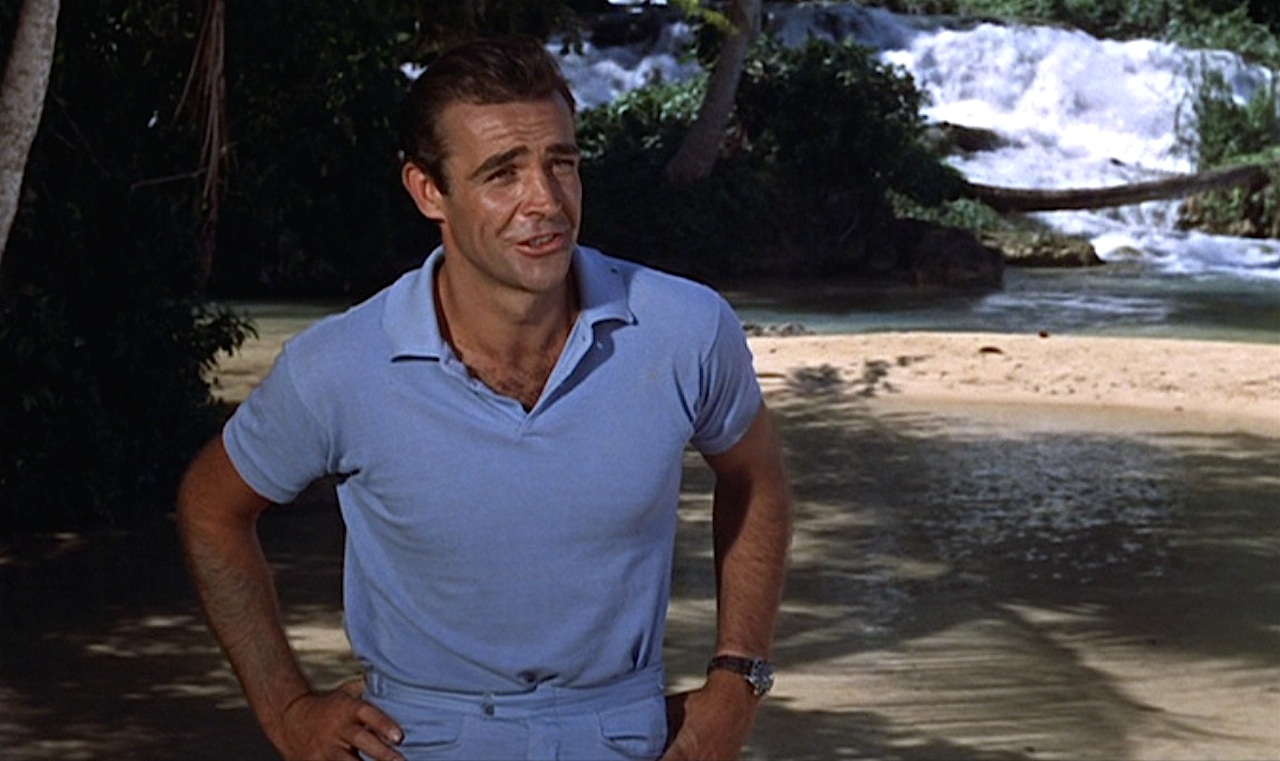 A polo t-shirt is what a man of style wears in the heat. Bond may be mostly associated with a black tie dress code or a freshly pressed suit, but he’s also successfully proven that you can wear sportswear and still look sharp. Sean Connery’s Bond gave the very first lesson in casual warm weather style, providing the blueprint not only for the ultimate formal wear, but for the ultimate casual wear, too, for men across the globe. He sported his light blue polo T-shirt cuffed at the sleeves, unbuttoned and tucked into light blue trousers. Having deservedly earned its place among the timeless pieces of menswear, the polo T-shirt looks just as good today as it did five decades ago, especially now that Daniel Craig’s Bond gives the garment a modern and individual vibe. His Sunspel polo is short on the arms and features a cleaner fit, suitable for a more muscular and action-prone Bond.

The short-sleeved shirt and the smart-casual look.

While Sean Connery did a good job at keeping the short-sleeved shirt look on the casual side (wearing it untucked and paired with light-coloured casual trousers), Daniel Craig wears it more smartly (tucked, belted, worn with an elegant pair of Brioni darted trousers). Truth be told, I didn’t think I would see modern Bond in a short-sleeved shirt – an item many men fret may look dated, but which, as Daniel Craig shows, can be just as stylish as its longer-armed brother. Craig also teaches men how the short-sleeved shirt should be worn: never with a tie, always with the right cut (neither tight nor baggy fit allowed), and right sleeve length (short means short, so it should hit at least a few centimetres above the elbows).