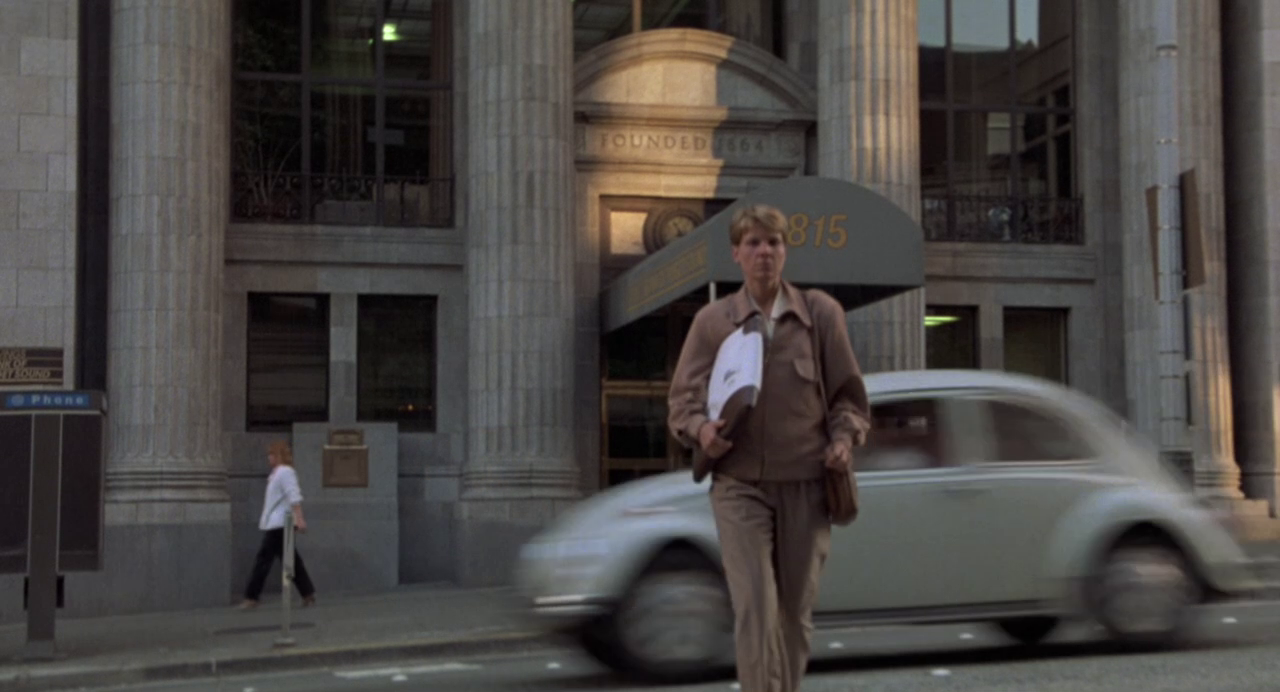 Her outfits are mannish; her words are enunciated with cold, distant, crisp precision; her presence is uptight and cautious; her sculpted face never crumples. Some have criticized Lindsay Crouse’s performance in House of Games as robotic, a total absence of appeal, even unsettling. I beg to differ.

Why are female characters always expected to be read for signs of sympathy and vulnerability? Lindsay Crouse is great in the film; her role is intentional, her manner of speaking deliberate and practiced. It makes for a fascinating character study. Besides the film’s spectacular set-up, it’s her character that engages the viewer’s interest. What will she do next, what is she looking for, how far is she willing to go, is it revenge she’s after, is it a deep-down repressed satisfaction, or both? Even after the night she spends in the hotel room with Mike (Joe Montegna), there is nothing to give away her true feelings. Wouldn’t it have been a cliché if she had? 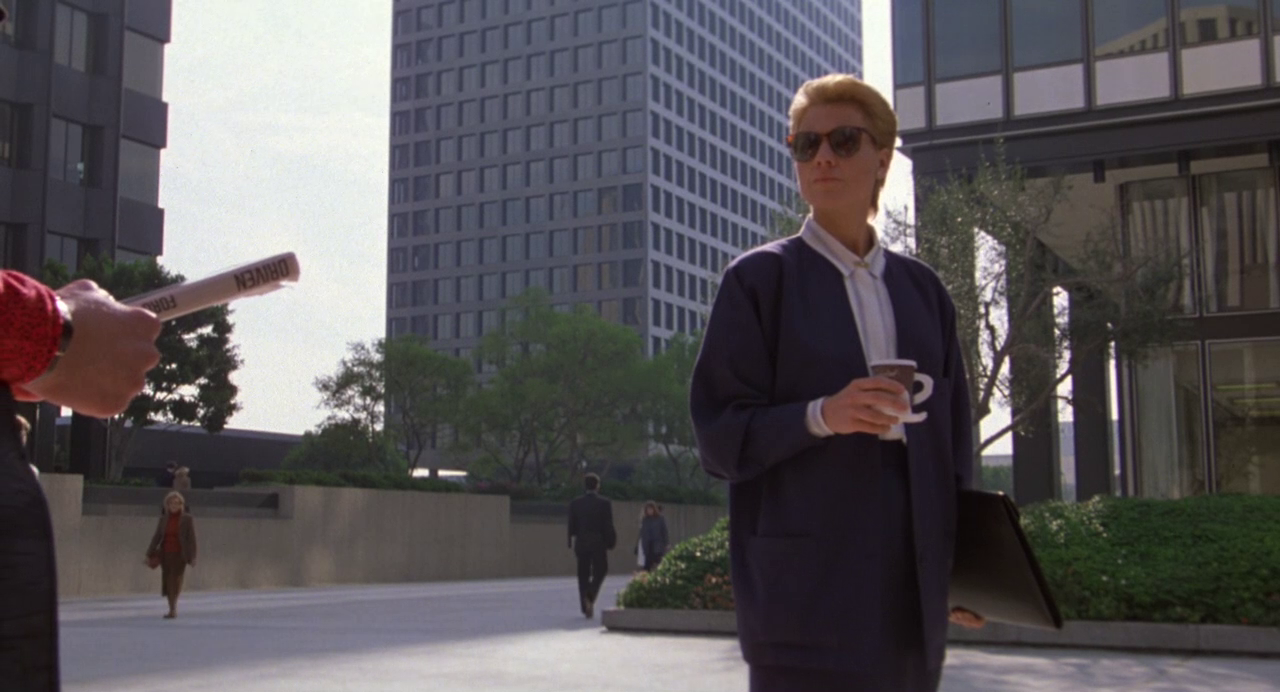 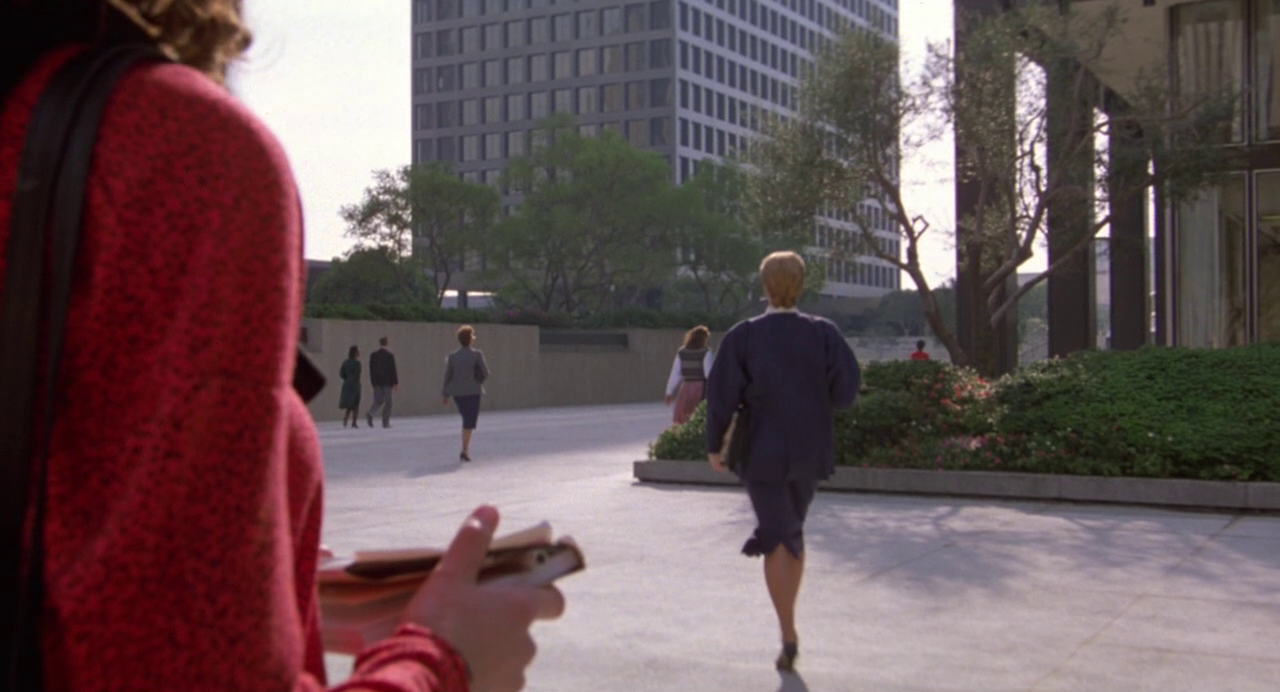 “It’s called a confidence game. Why? Because you give me your confidence?
No. Because I give you mine.”

House of Games marked David Mamet’s directorial debut. He’d already earned his reputation as a playwright (winning the Pulitzer Prize in 1984 for Glengary Glenn Ross) and screenwriter (The Verdict (1982), The Postman Always Rings Twice (1981), The Untouchables (1987)). Mamet has a distinctive, pragmatic style of dialogue, dubbed ‘Mamet Speak’: poignantly stylised, cynical, abrupt, reminiscent of film noir. That’s probably what I liked the most about the film, the overall neo-noir feel. Only it gets even better: the male and female characters are reversed. It’s not the morally ambiguous male anti-hero alientated from society who falls in the traps of the femme fatale, but a successful woman psychiatrist who falls into the traps of a con artist. It’s her who turns you into a willing accomplice. 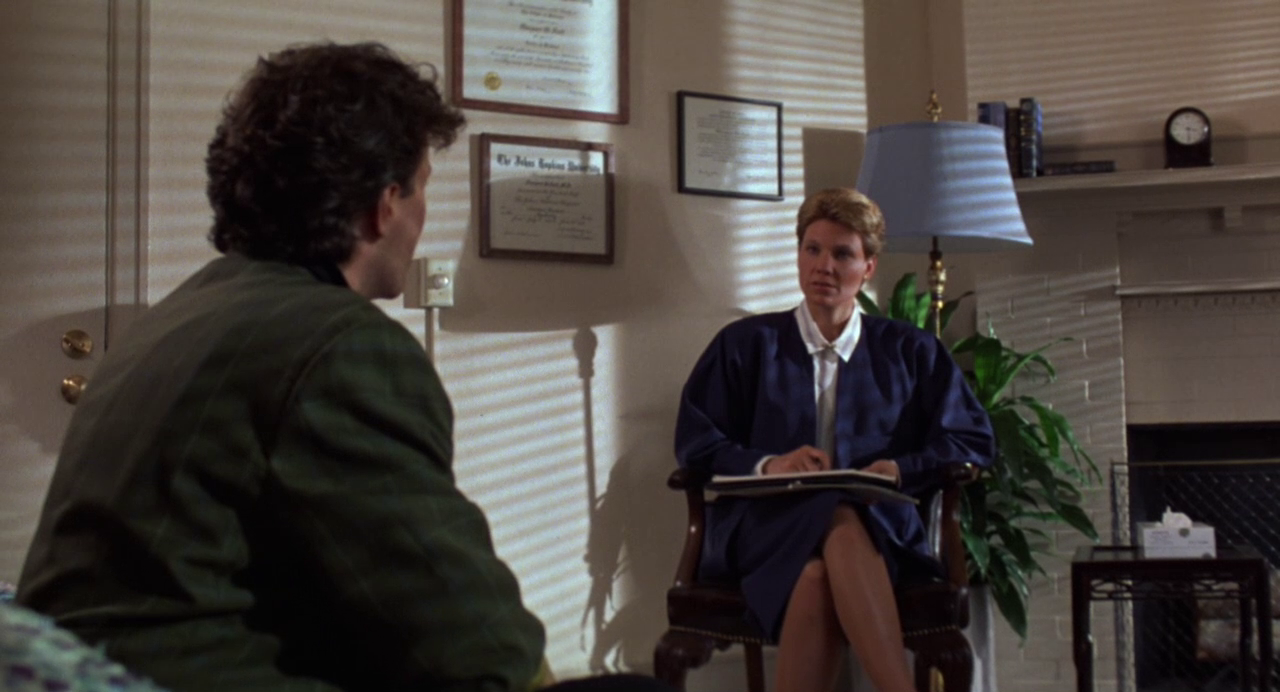 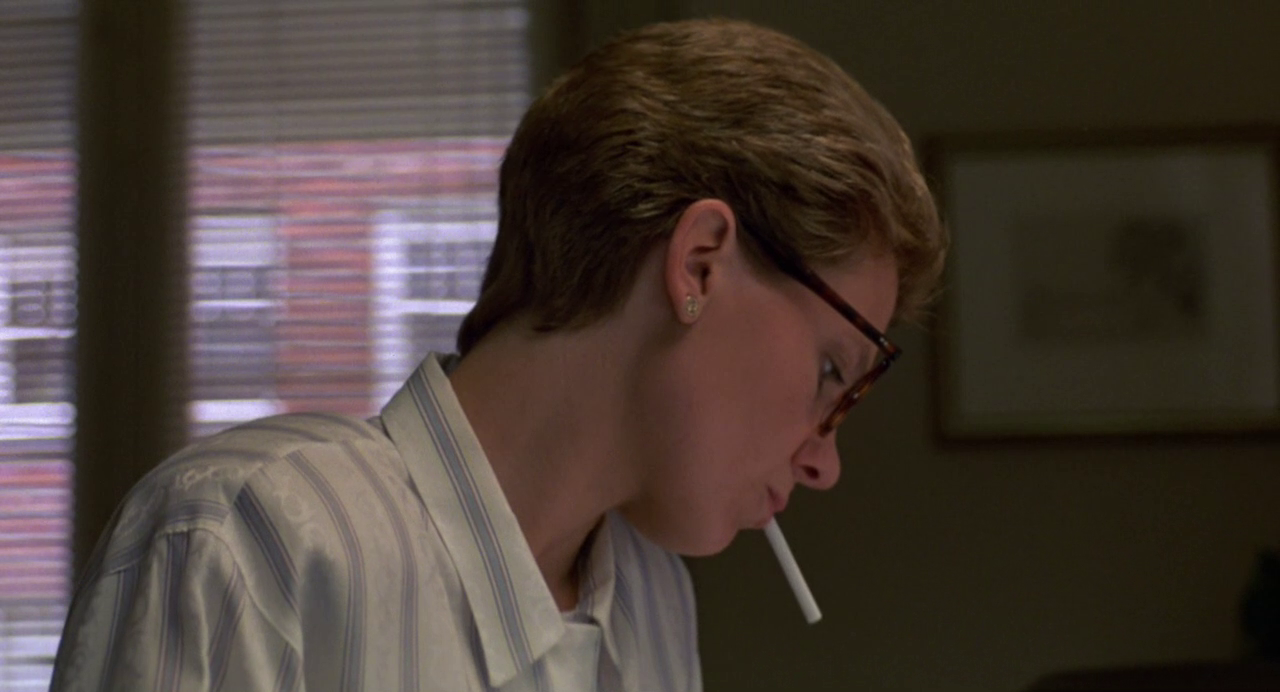 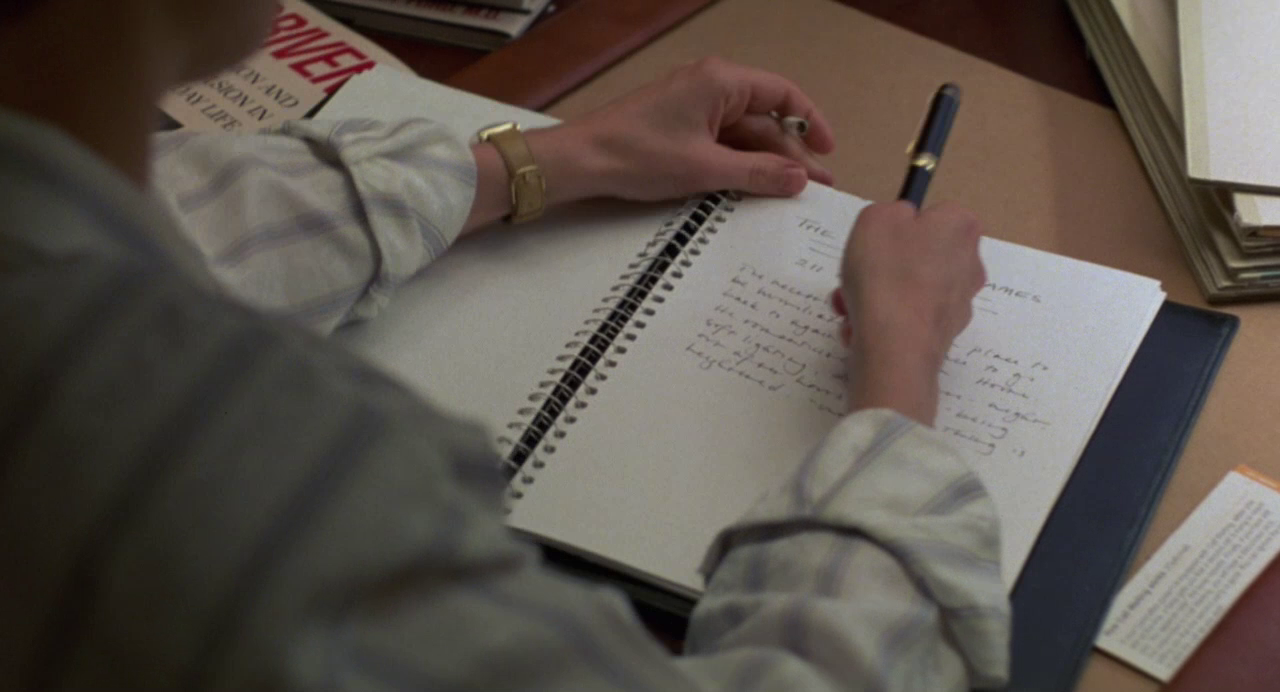 Crouse’s Dr. Margaret Ford is a successful psychologist who sees her career as more than just a profession – it’s her calling. Ford’s best-selling book, Driven: Obsession and Compulsion in Everyday Life, is a treatise on compulsive behavior, and it is her drive for her chosen profession that draws Margaret into an unfamiliar, underground world of professional grifters. As she continues to venture with the swindlers, it becomes clear that she herself has some unsolved issues of her own. Though, even prior to her involvement with them, she makes a couple of occasional-but-noticeable Freudian slips, something which later plays a significant role during a pivotal scene in the film. It’s also worthy of note that she doesn’t reveal her name to any of the con men until that very scene. That should tell us something about who’s playing whom.

Because, besides the behavioral hints I mention above, there is also one visual element that I do not believe is coincidental: the colour red first appears in the outfit of the admirer who is nervously approaching Dr. Ford asking for an autograph (she’s all dressed in red too), then on the red taxi cab that Margaret takes after her first visit to the House of Games, and, finally, the red convertible car she has to steal to get away after she is made to believe she has killed a man. Take it as an alarm signal for everyone, from the grifters to yourself, the viewer: You have to pay attention! 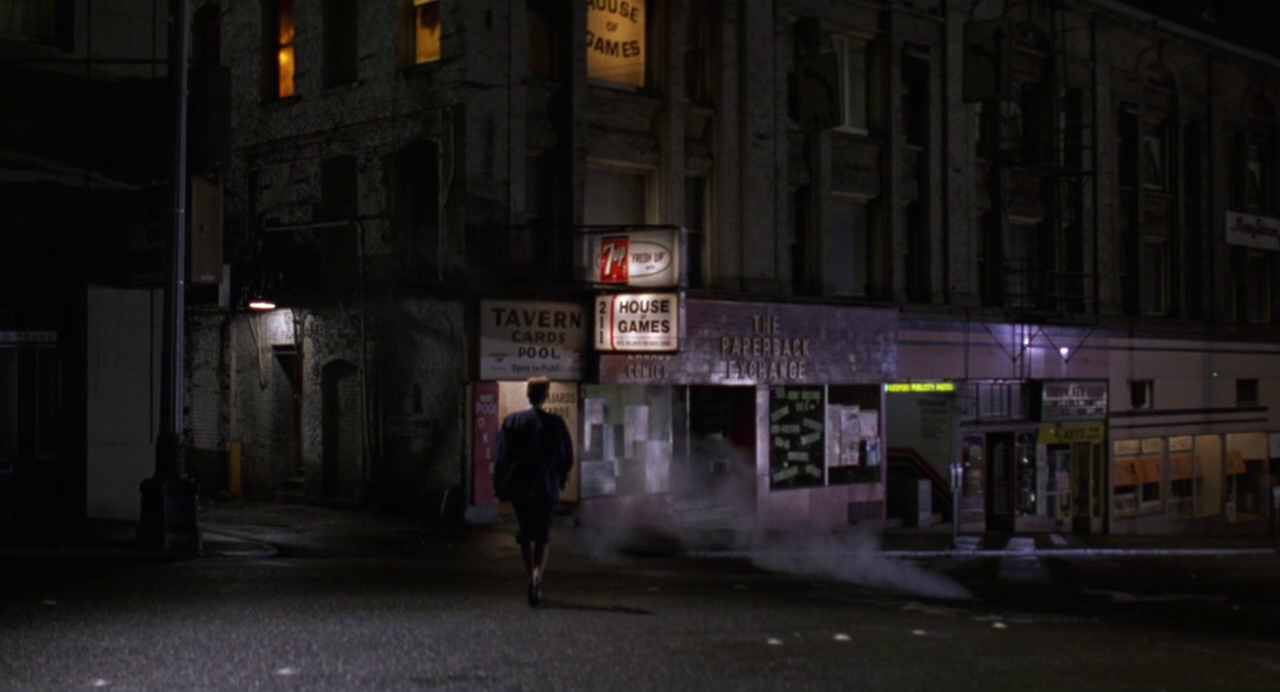 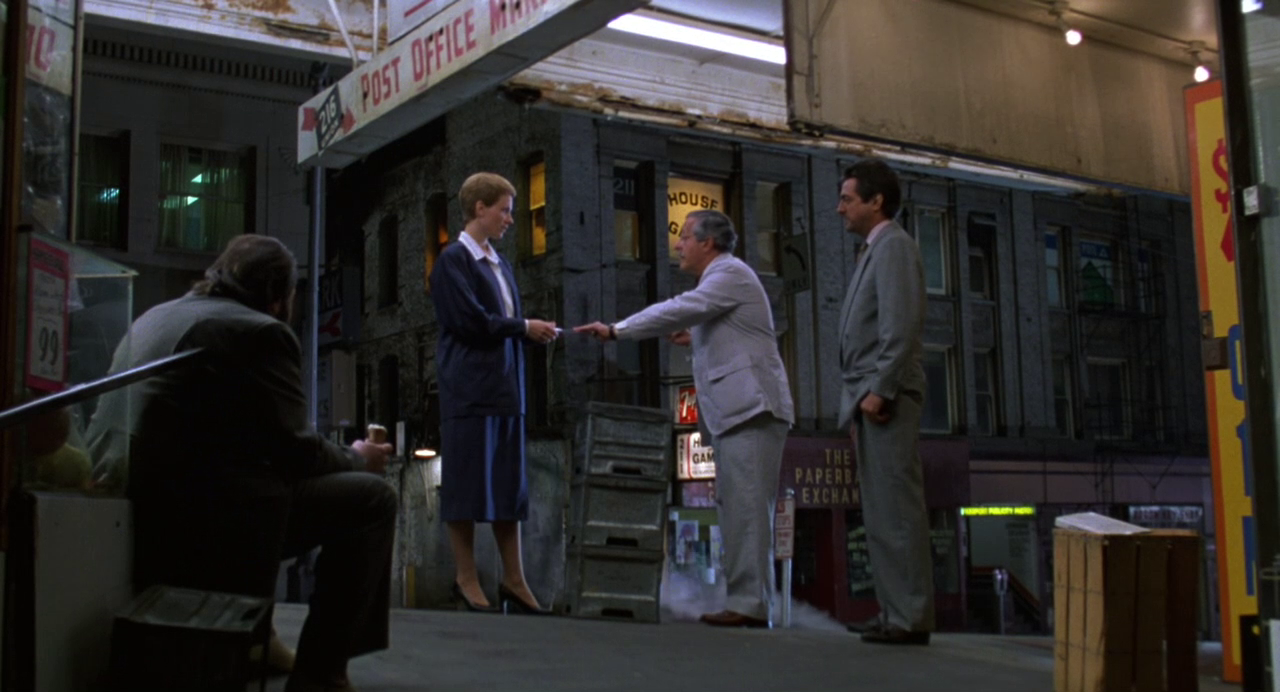 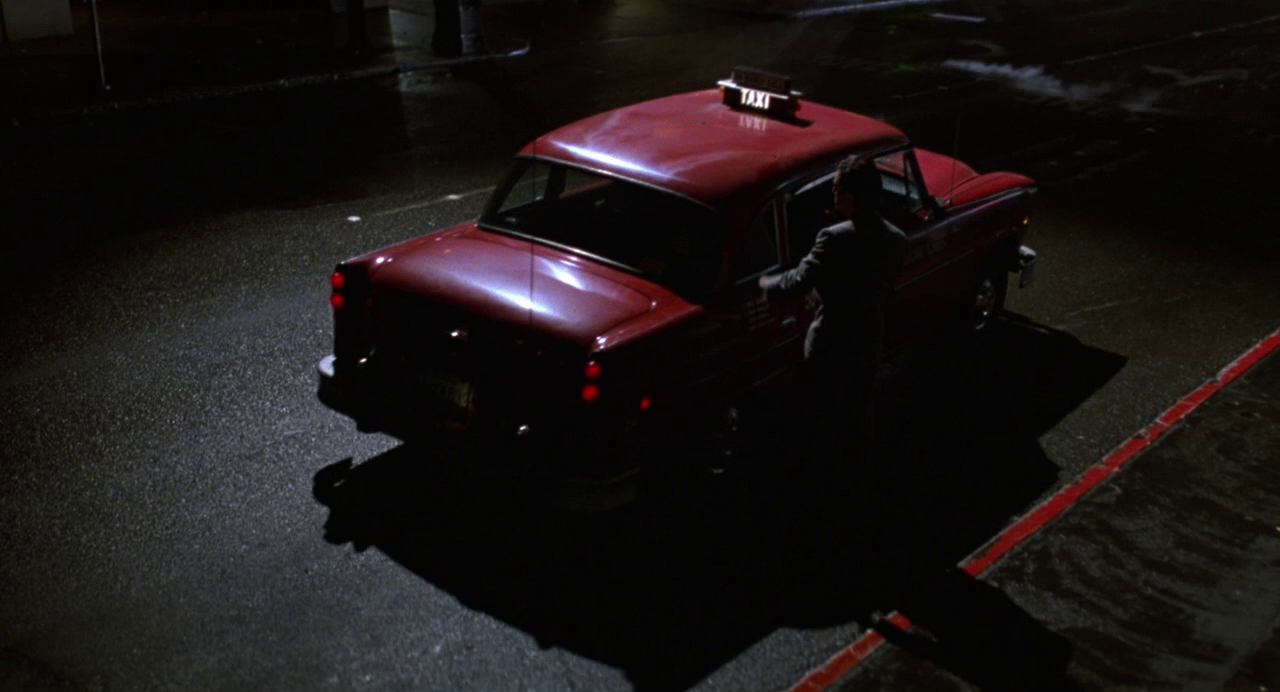 Slant Magazine was referencing an interview in which Lindsay Crouse made a compelling analysis of House of Games as a dream film – a non-representational narrative built from bits of Margaret’s personality. The costumes are part of that personality. So let’s pay attention to them, too – Nan Cibula was the costume designer. Margaret Ford scarcely wears jewellery. Just a classic leather-strap watch, and delicate, barely-there earrings. She wears her hair cut short. Her shirts, completely buttoned up, vary from white to white with blue stripes, and blue. Her suits are sober, wide shouldered, and navy, grey or light blue coloured. 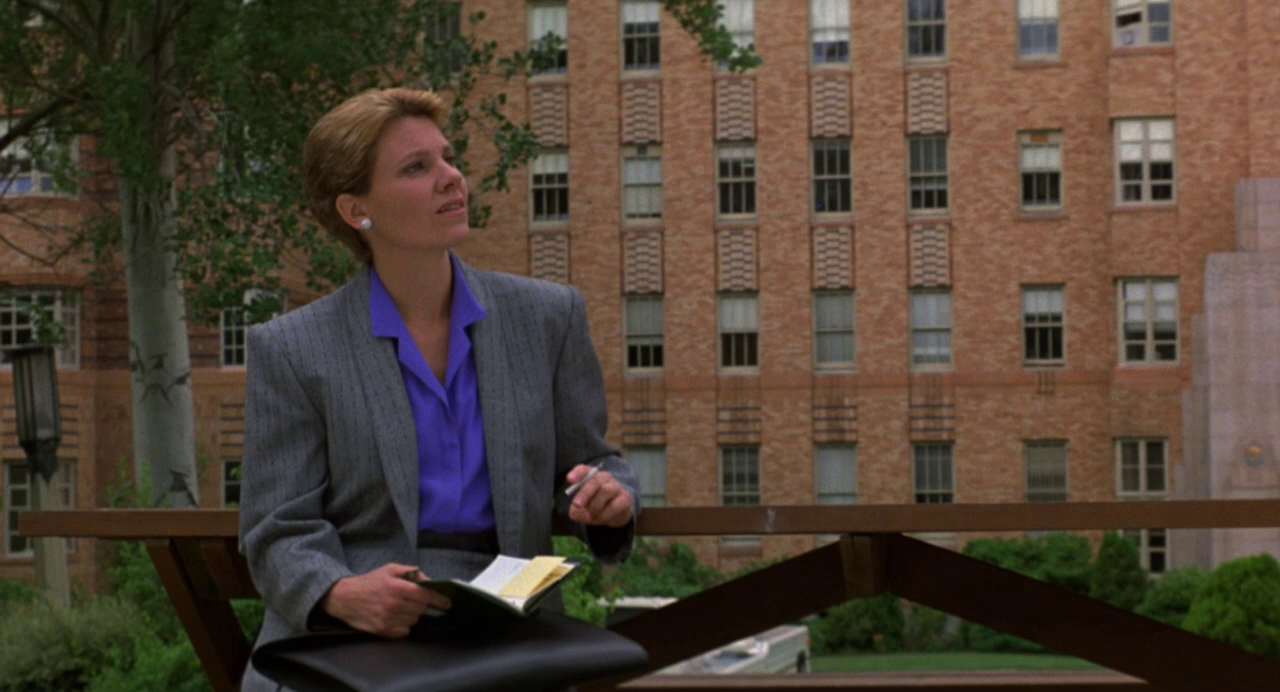 I’d like to elaborate on that remark about the unattractiveness and masculinity of Margaret’s outfits. It was the eighties, the decade of power dressing. Women’s clothes were inspired by menswear. The power suit is the term coined in the 1980s to describe a skirt suit worn by career women, with the jacket resembling a man’s suit jacket in cut, but having the shoulders heavily padded and exaggerated. Women embraced the sober suit in pursuit of an image that would convey self-confidence, decidedness, affluence and success in the business and social world. “The simple tailored wool suit in neutral navy or slate blue gray, worn with non-sexual blouses, imitated uniform at rank, which, by design, was authoritative,” argued John Malloy in his book, Women Dress for Success. To label Margaret Ford’s clothes as unappealing and leave it at that is to miss part of the point. Her clothes may be indicative of stunted sexuality, but they are just as much indicative of professional objectivity. 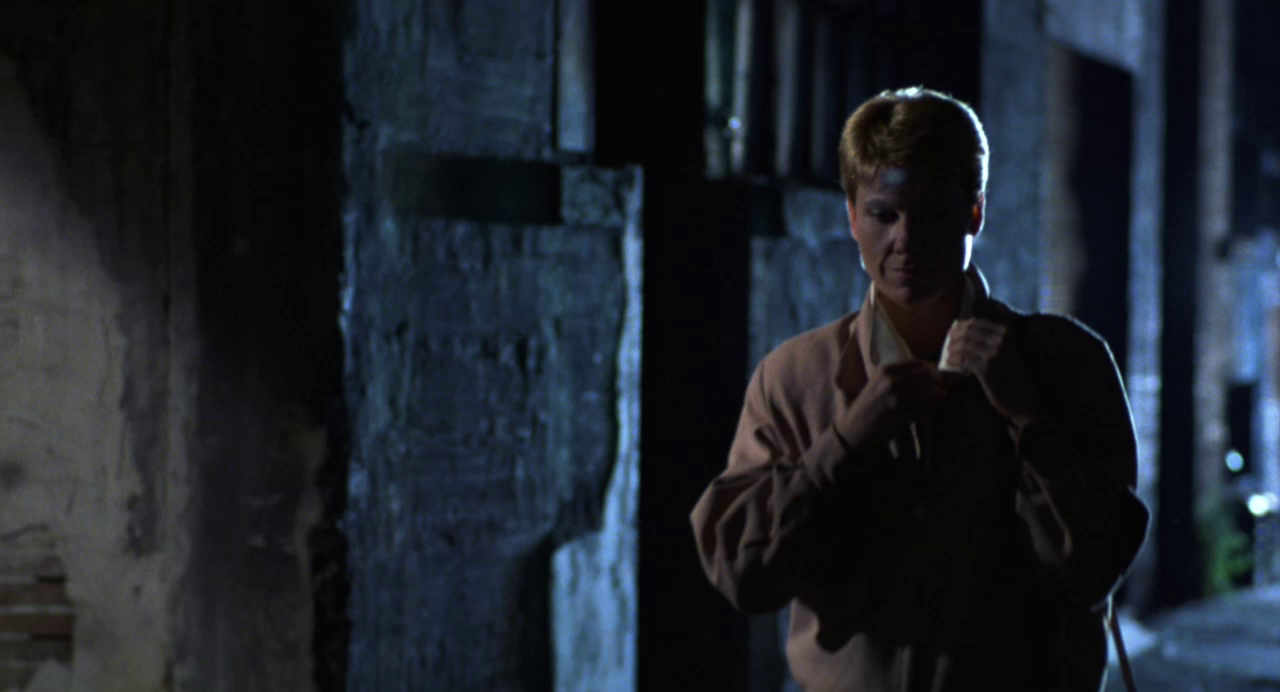 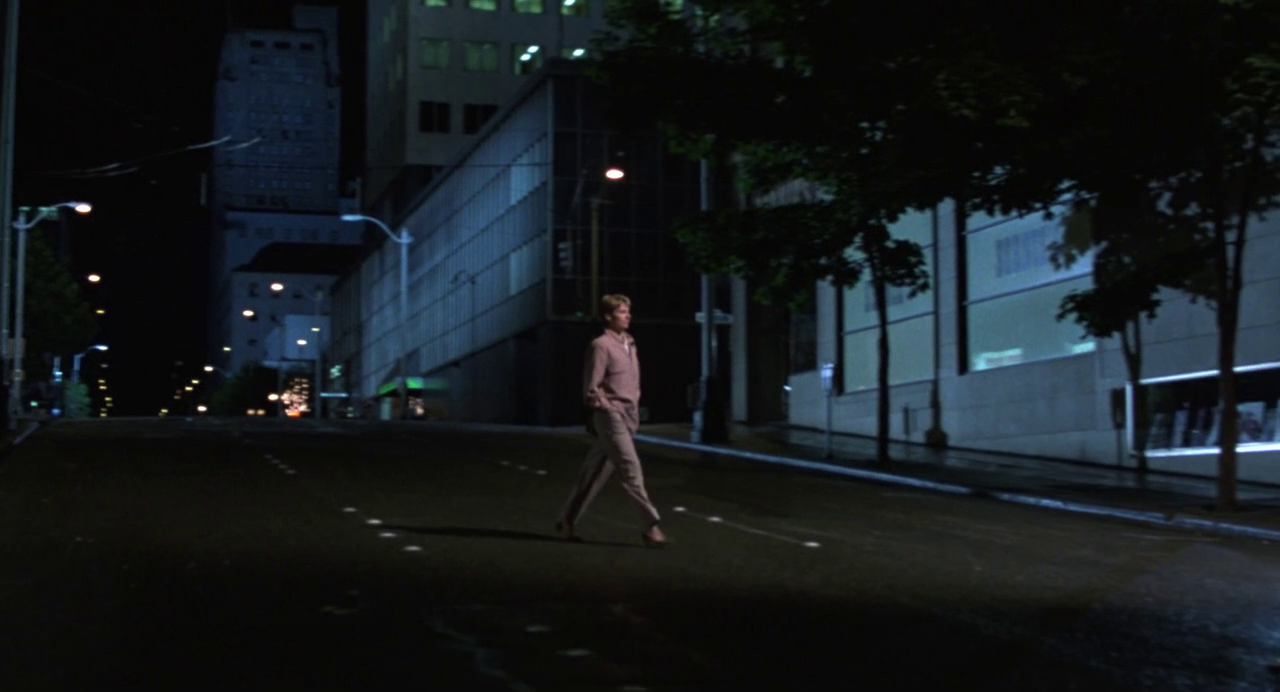 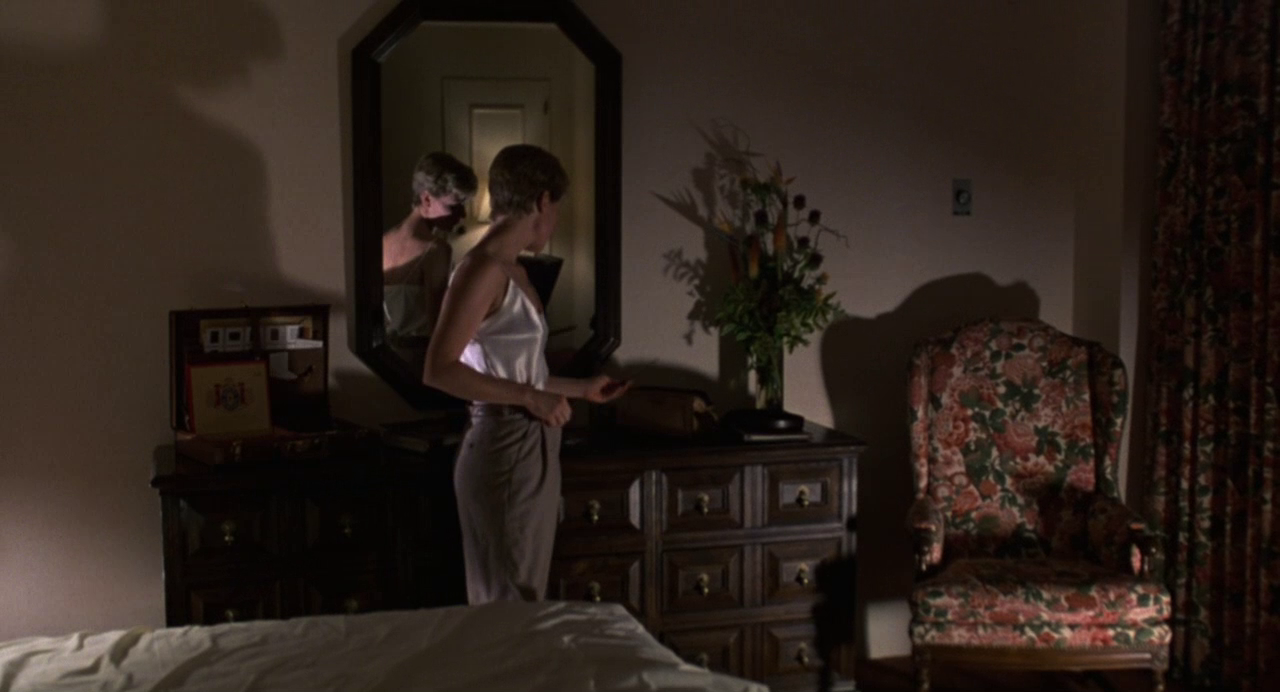 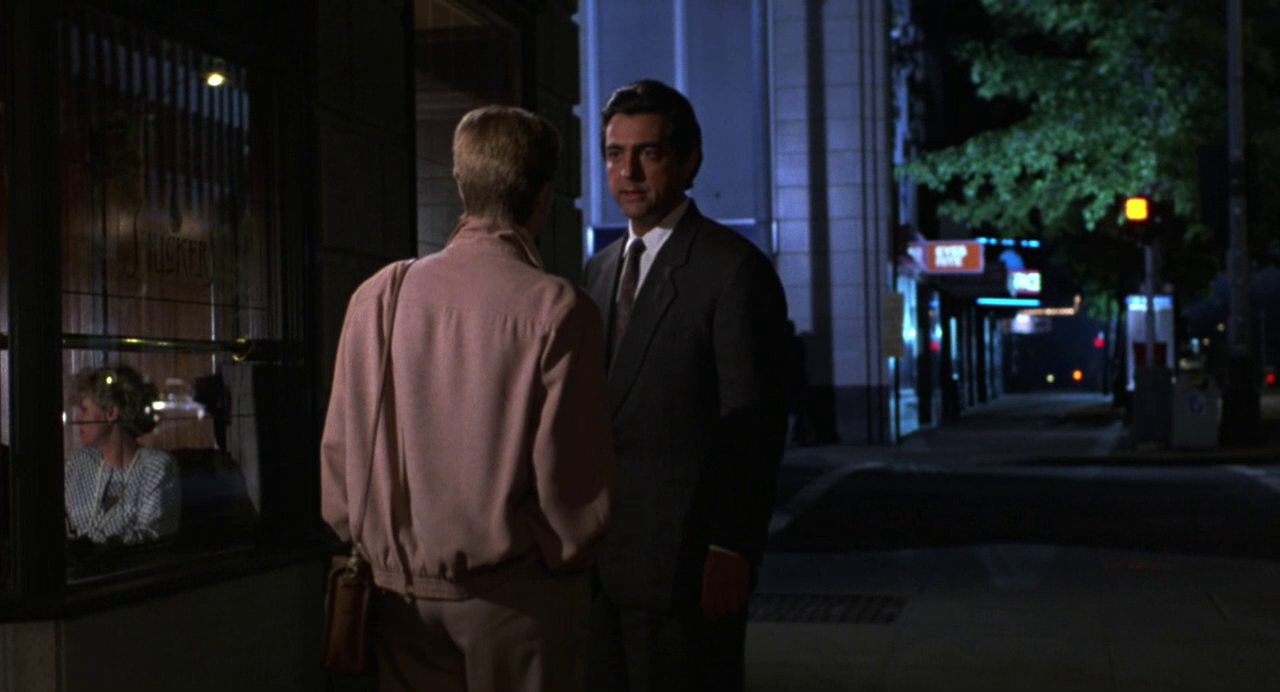 And then there is the trousers look (my favourite). Tailored, pleated trousers in a shade of beige, a powder pink waist-long jacket, and heels. Still masculine inspired, but there is something new to it. She’s put on a coloured necklace. It is not ostentatious; I wouldn’t have noticed it if she hadn’t played with it (see first image in the set above) in that scene when she returns to the House of Games. But there has been a change. “Is it something that gives you joy? Good.”, says her friend approvingly when Margaret refuses her dinner invitation saying that she has other plans. And I think this joy she feels hints more towards the fact that she is beginning to like the game than that she’s becoming attracted to Mike. 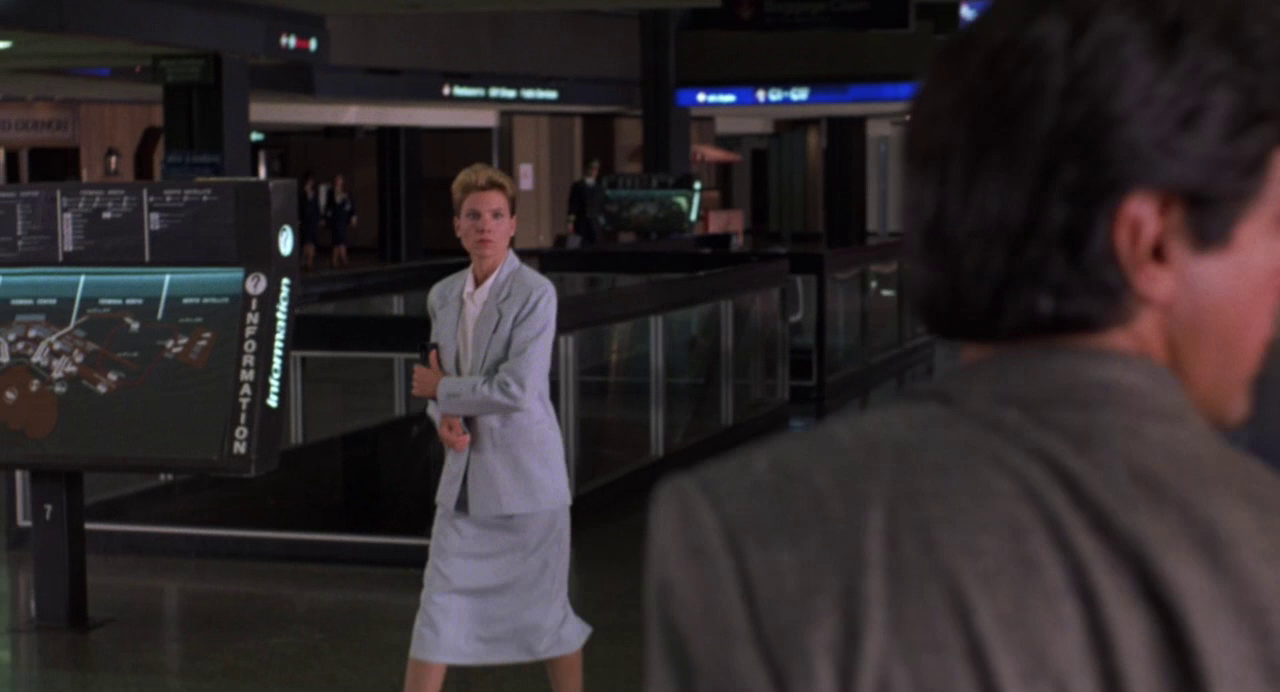 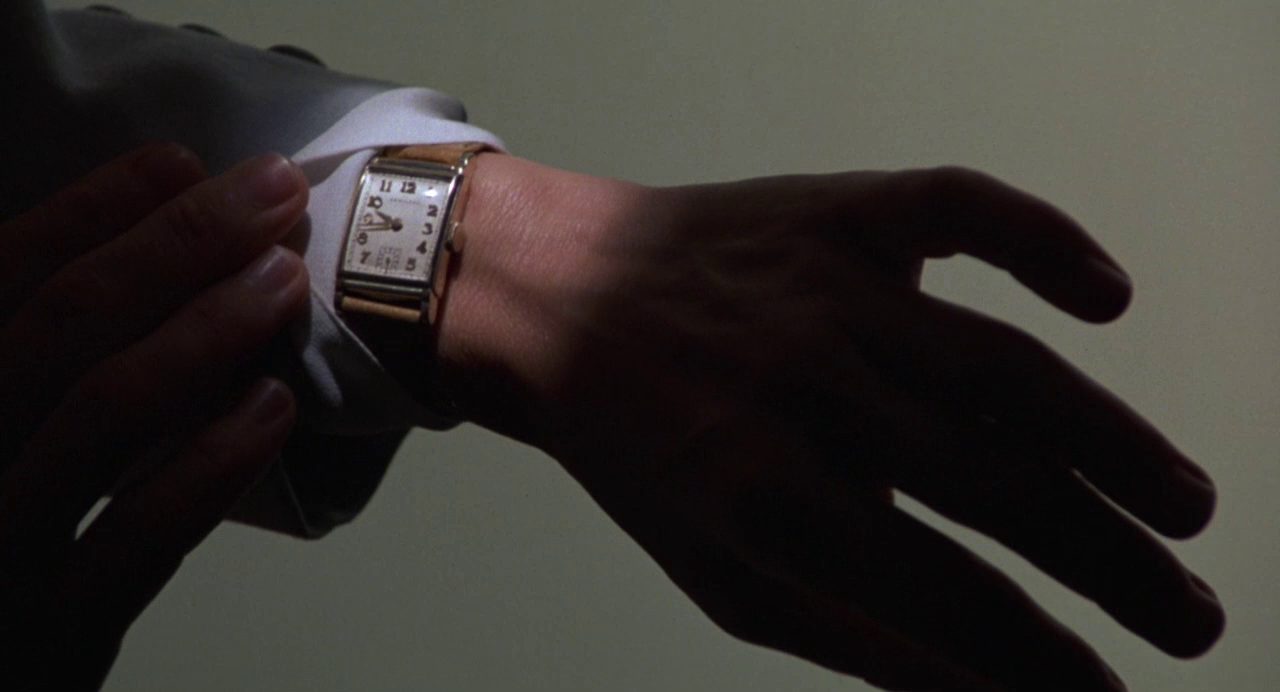 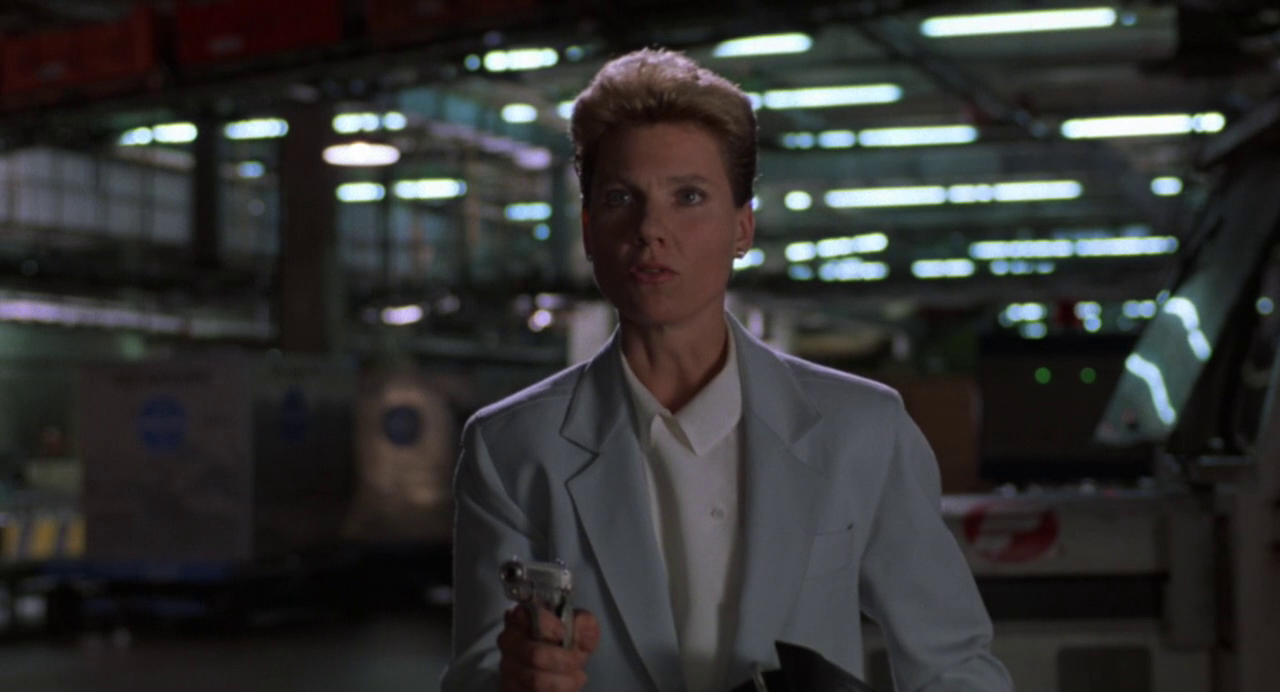 In the final scene, Mamet first shows Margaret from behind. She is wearing a floral dress in vibrant colors, perfectly blending in the setting of luscious vegetation. She turns around and we see her red-rimmed sunglasses, red clutch and white oversized earrings – the kind that don’t go unnoticed anymore. She has the same calm and calculated manner of speaking when approached by a reader asking her to sign his copy of her book. But something is different. She has taken a trip and “forgiven herself”, she tells her friend who had given her this exact piece of advice without her knowing what Margaret had done. Ford steals a gold cigarette lighter from a purse, and her smug smile of self-satisfaction afterwards, as she lights her cigarette with it, reveals that she has fallen into the addictive lure of being a con artist herself. That is what brings her joy. 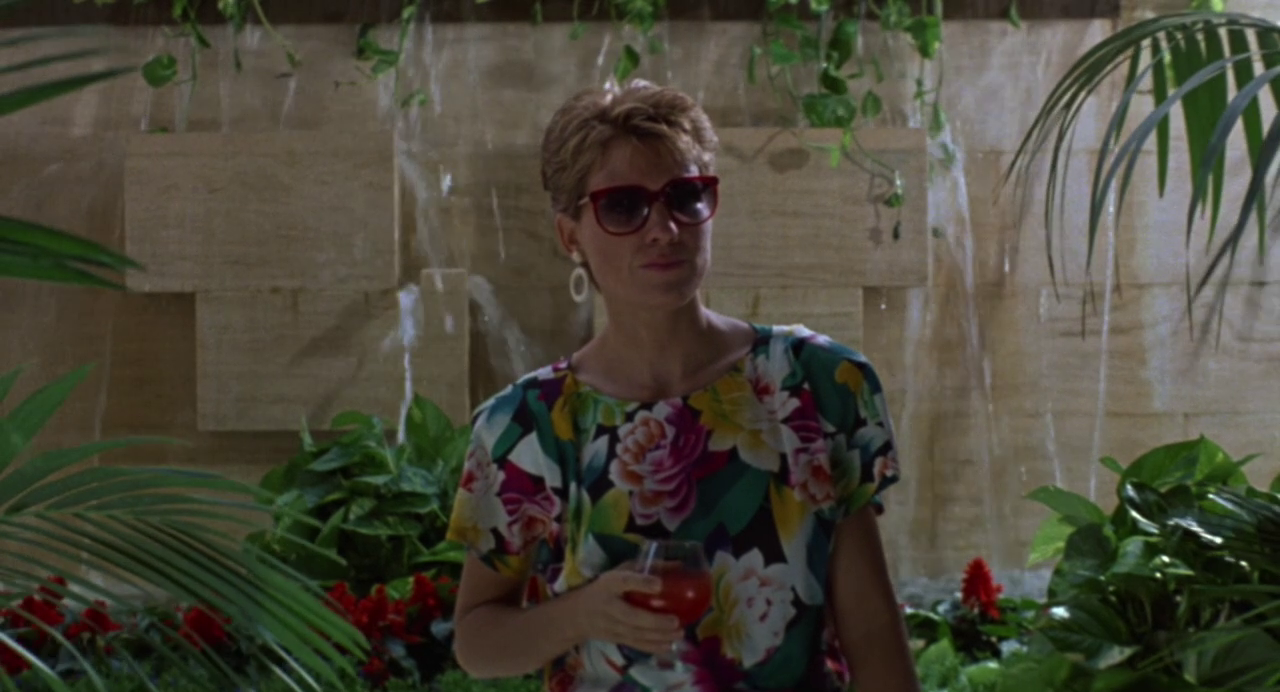 One reply on “Fashion & Film: Crisp Precision – Lindsay Crouse in House of Games”

I saw “House of Games” back then and just rewatched it. I’m an androgynous lesbian and very much enjoyed Margaret Ford’s wardrobe. Thank you for this fascinating review.