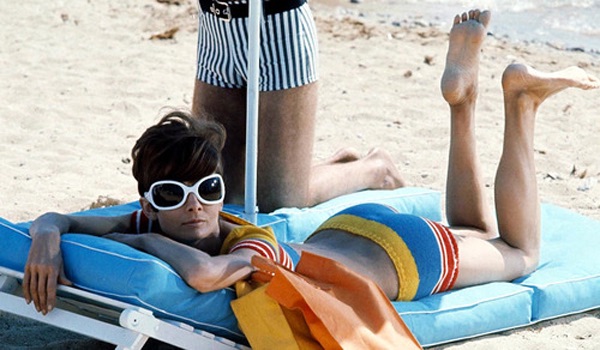 Bold, bright colours were a 60s leitmotif, capturing the decade’s optimistic, independent spirit. The big white-framed Oliver Goldsmith sunglasses were an Audrey Hepburn trademark. This look is the perfect juxtaposition of the two, the feverish sixties and Audrey’s singular style – she knew how to lend an elegant spin even to the extravagant clothes that defined the age of Swinging London.

If there is one person who can make the 1960s fashion appealing, then that’s Audrey Hepburn. It was a decade of young and innovative fashion, but on Audrey, in the film Two for the Road, it became truly modern. Audrey’s made-to-measure Givenchy clothes may have helped her enter into legend, but it is her own very personal style that allows her to still look fashionable today. She herself was seen as a model of rebellion by her contemporaries, and in Stanley Donen’s 1967 movie, she put her own stamp on the revolutionary fashions of the time. In Audrey’s case, it was the woman who wore the clothes.

Two for the Road is not only one of my favourite Audrey Hepburn movies in terms of style, but in terms of story, too. It feels like a real, honest love story, with ups and downs, and a witty look at marriage. As for Audrey, she is different than in other films she is mostly remembered for, chic without always being proper and poised, loosened up, without sacrificing a drop of grace, and she has a much better chemistry with co-star Albert Finney (both delivering some of their finest performances) than she had with Humphrey Bogart or Cary Grant. The film has a non-linear structure, leaping back and forth in time, showing a married couple, Mark (Finney) and Joanna (Hepburn), always on the road, through snapshots of their travels at different stages of their relationship, as they hitchhike, drive and fly around Europe. Instead, it’s the style – from wardrobe, hair-style and make-up, to cars – that is used brilliantly to show the evolution of the characters, of their lifestyle, from poverty to the jet set, and of their marriage. Clothes go a long way, giving form to feelings and voice to our heroine’s way of living.

Reportedly, director Stanley Donen insisted that Audrey be dressed in something more fashionable than Givenchy, and although she was averse to wearing off-the-peg clothes (simply because they usually didn’t fit her gamine looks), she agreed to wear just that for the film: off-the-rack shopped-for creations by the designers of the day: Paco Rabbane, Mary Quant, Ken Scott, Michèle Rosier, Foale and Tuffin, Andre Courrèges.

College-aged Joanna. The clothes speak for themselves: jeans, simple sweaters and sneakers. Their simplicity is not only representative of her stage in life, but can also indicate the beginning of the protagonists’ relationship.

Mary Quant mini dress in colour blocking (bright and well coordinated designs were one of her signatures) – very modern back in 1967.

Quant’s clothes were in perfect tune with the 1960s, a decade keen on freedom and change. The Swinging Sixties were non-conformist, exclusive; a youthful revolt and a boutique culture that revitalised England, influenced the big French fashion houses, and took over America, too. Mary Quant was at the forefront of this revolution, rightfully named by writer Bernard Levin “the high priestess of 60s fashion”. André Courrèges might have invented the mini skirt, but it was Quant and her Bazaar boutique on London’s Kings Road that transformed the garment into the signature of an entire generation. “The real creators are the girls, the ones you see on the street”, she would say.

There are plenty of traditional Audrey pieces in her movie wardrobe, from oversized sunglasses, Burberry trench coat and turtlenecks (very popular in the 1960s), to flats, shirt with the ends unbuttoned and tied at waist (usually over a top, here over a bathing suit), and men’s shirts. Blending them with signature fashion-forward pieces of the sixties, she made both styles more appealing and more approachable to a wider public.

There is a preppy vibe in a few of Audrey’s looks. The rugby mini-dress may be very sixties, especially paired with the thick tights and space-age shades in the style of André Courrèges, but it can very well play as collegiate style-inspired – it has formality, casualness, colour, tradition and utility, everything that a preppy look (at its peak in the 50s and 60s) employs.

André Courrèges was considered an architect of fashion design thanks to his devotion to construction. He also became known as the Space Age designer, because his clothes were clean, functional, futuristic. An engineer by profession, he worked for Balenciaga for 12 years, honing his skill in the cut and construction of the garment, before establishing his own fashion house in 1961. He invented a whole new look, different from everything in contemporary fashion, his clothes representing a “couture version of the Youthquake-driven street style”.

The designers of the 60s had a passion for new, synthetic or unconventional materials, like plastic, metal and PVC. For her first Paris fashion show, in 1963, Quant created the futuristic Wet Collection, a series of PVC dresses and small raincoats in vibrant colours. Paco Rabbane’s first collection, from 1966, was titled Twelve Unwearable Dresses in Contemporary Materials, while Michèle Rosier had a love for plastics and is credited with introducing vinyl to Paris fashions before André Courrèges.

A silk jersey print dress by Ken Scott, named the designer of modernity and colour. With its psychedelic pattern, it could very well be an Emilio Pucci. 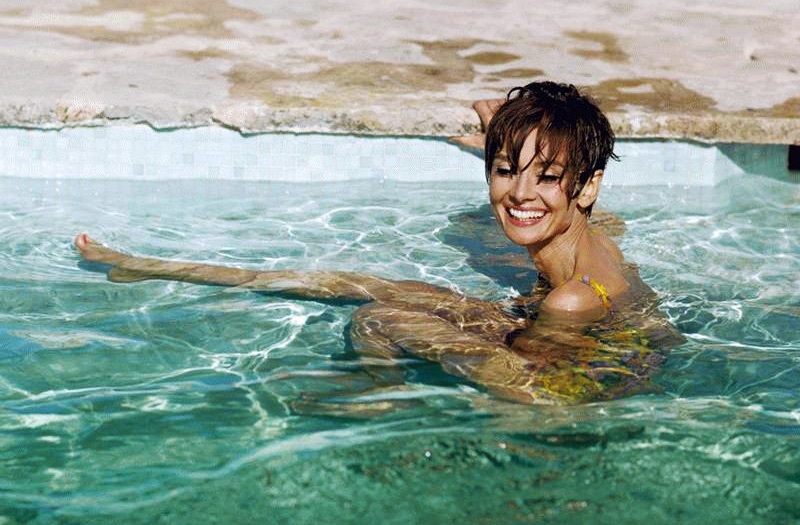 I like seeing Audrey “off-duty”, outfitted in beach and poolside looks, especially the sequence where she wears the swimming suit in colourful geometric pattern, possibly another Ken Scott. Photographer Terry O’Neill shot the actress on set and took some photos (last one above) of her during the filming of that exact scene. He said: “Audrey Hepburn was an absolute doll, and I wish I’d worked on more of her films. You don’t often see pictures like this of her, because mostly you see very posed stuff. But she was sensational to photograph. This was a scene where she got flung in a swimming pool, and she hated being flung into the water, but she was so professional you’d never know it. She was fabulous: she loved all that.” You can sense that she is off guard there, her carefree, uninhibited side finally making an attempt to come to life, without her make-up, perfect hair-do and couture dress. 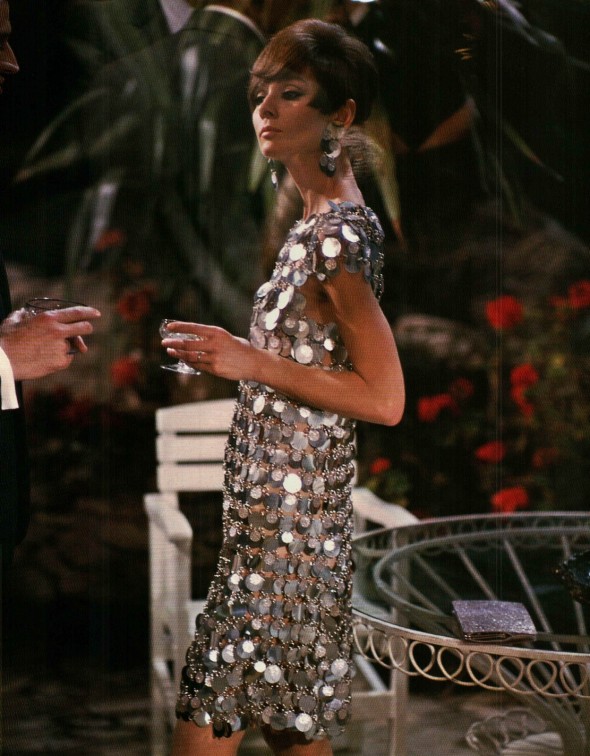 The Paco Rabbane cap-sleeved dress made of acrylic discs, with drop earrings to match, is undoubtedly the most fabulous look in the film. A talent for design ran in the Rabbane family; his mother was the chef seamstress at Balenciaga’s Spanish branch. He had an industrial design background, which he put to good use when he started out in fashion: first as jewellery designer, selling his plastic jewellery and buttons to Balenciaga, Dior and Givenchy, and then as a fashion revolutionary, by eschewing classic couture techniques and experimenting with unconventional materials and new methods of garment construction. But on Audrey Hepburn, even a dress of discs and chains had the allure of a classic.

Leave a Reply to Style in film: Audrey Hepburn in Two for the Road | Classiq Cancel reply