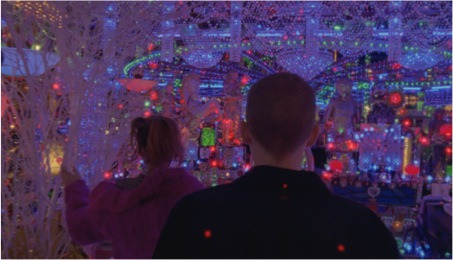 Gaspar Noe’s psychedelic foray into the drug-soaked, neon-lit underbelly of central Tokyo is an acutely realised claustrophobic nightmare; a cacophony of wincing lights, narrow corridors and squalid rooms where humans scrabble to procreate and self-destruct in an unrelenting cycle of misery and personal tragedy. It’s long and grandiose, beautiful and repellent; a two-and-three-quarter hour tour de force.

Enter the Void begins with small-time drug dealer Oscar taking a hit of super-hallucinogen DMT before heading out to a strobe-lit nightclub called The Void, where he is shot dead by police in a drugs raid. He dies on a toilet cubicle floor and his ‘spirit’ leaves his body, free to float above Tokyo and silently observe the action. From this point onwards, the film consists of a series of flashbacks, recalled childhood episodes leading up to – and after – Oscar and his sister’s parents’ death.

As with notorious revenge-shocker Irreversible, Noe uses a heady cocktail of sickening camera swings, low frequency sounds and extreme sex and violence to summon up a hellish, almost dystopian reimagining of Tokyo in all its squalor and vice. The city is illuminated with migraine-inducing fluorescents and Oscar’s aerial view gives us an unrelenting view of this endless circus of visceral sex and horrors. Visually, inspiration has been taken from Scorsese’s Taxi Driver, particularly the shots of 42nd St. and the brothel in which Iris lives with its dark red walls and narrow corridors, then later the aerial view we are given after Travis’ explosive rampage. Heavy references to Kubrick’s 2001 can also be noted throughout, from the ubiquitous psychedelic DMT-induced visuals to the reincarnation-rebirth ending.

Far-out spiritual rebirth references aside, the overriding tone is bleak. Despite overwhelming visual and aural stimulation, Enter the Void has a hollow stance on human existence, and the theme of reincarnation remains joyless and cold. It could just be the remaining DMT in Oscar’s dying brain, after all. Everything continues, and Noe’s players stumble through the grubby streets in search of the three things displayed by a neon sign above the strip club where Linda works: ‘MONEY, SEX, POWER’. This aggressive triplet of proclamations towers over Noe’s night-time Tokyo, a paradigm of modern-day sleaze, extravagance and emptiness.

Is Noe’s trippy offering self-indulgent pseudo-intellectual shock-porn, as glittery and fulfilling as gazing at a pub fruit machine, or an overlooked masterpiece? Well… it’s both really. It is empty and glittery, but that’s the point; and to deny a sensual evocation of emptiness the accolade of high art seems a fallacy. 2001: A Space Odyssey pushed the boundaries of cinema because it marked a moving away from the mainstream cinematic tradition of films as simply animated text – it told a story predominantly through images and sound as opposed to narration.

Equally ambitious, Enter the Void exists as a series of psychedelic visuals, throbbing soundscapes and tricky camera work, culminating in a daringly original film that packs a punch. Picking up from where Kubrick left off, Noe gives us a virtuoso performance as director to create a flawed triumph, as bold and as daring as Kubrick’s film was back in 1968.