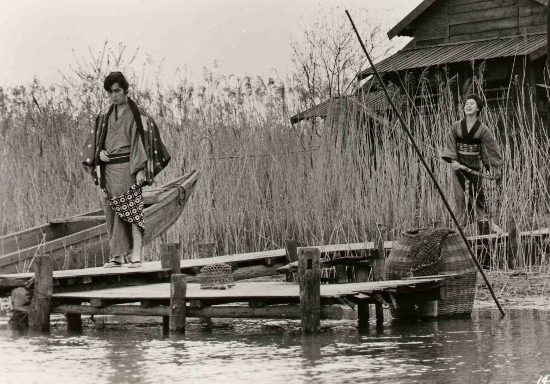 Easy Tavern is an infamous inn on the edge of town, in the wetlands of the Fukagawa. The inn’s regulars are petty crooks and smugglers. Sadashichi, one of the smugglers, not only looks dangerous: he demonstrates his ferocity by killing a police officer. Yet it’s clear from the beginning that the director’s sympathies lie with the smugglers, and not with the law enforcers whose words are undermined by arrogance and cruelty.

Evil permeates the atmosphere of the film: in the corrupt society ruled by the samurai, and the politicians who support large-scale crime and corruption. By comparison, the smugglers in the tavern are mere petty criminals who become victims in the struggle for power played out by highly influential families. Although the members of the gang are capable of brutality, the main source of violence comes from the ruthless police officers and a hypocritical society that allows people to be forced into slavery, and young women into brothels.

As Ikuzō, the inn’s proprietor says:  “They’re more like wild beasts than evil animals. Since they’re animals, they don’t recognise evil deeds as evil. They are crippled humans, so to speak.” He understands his men’s desire for recognition and affection, and this group of outsiders constitutes a surrogate family, united by loyalty and mutual concern. He behaves like a father towards his wayward sons, who he tries to keep them out of danger.

Challenging its evil image, the outcast community in the tavern reveals a capacity for compassion and change – something which society has so far denied them. When change does eventually arrive, it comes from within the group.

One of the smugglers, Sadashichi, is presented as a character with two sides: he’s cruel and indifferent, yet haunted by the ghosts of the past. One night, while drunk, he confesses to Ikuzō that he murdered his mother because she was a prostitute. We later learn his apparent indifference is only a mask behind which he hides his true feelings of loss and despair. Frequent close-ups focusing on his eyes show anger and terror, but also tenderness. His gaze is filled with yearning when, lost in reverie, Sadashichi watches the baby sparrow whose life he has saved. Sadashichi builds a cage for the tiny bird to protect it from cats and other predators, and he also admires Tomijirō’s willingness to sacrifice his life for the woman he loves.

This young man’s act of bravery is the spark that incites change within Sadashichi and his friends. “It feels good to give one’s life away for nothing,” Sadashichi “The Indifferent” says, then risks his own life in order to save the young man. This selfless attitude is referred to in the original title – Inochi bō ni furōni – which can be translated as “we give our lives for nothing”. The smugglers abandon their materialistic world view for the sake of a man and a woman wronged by society. Despite the failure of their mission that night, Sadashichi confirms it was “the first time we enjoyed our work.”

The idea that evil is only an image projected onto the outcasts is confirmed by the joyous mood of the smugglers, who are simply irresponsible, rather than evil. One of them constructs tiny horses out of straw, another, acting “with the heart of Buddha”, rescues Tomijirō from his persecutors, to whom he owes money. All are lost souls, trapped by society.

The landscape, too, plays an important part. The labyrinth of swamps and creeks surrounding the inn refer to human entanglement, while the omnipresent bullrushes create a natural barrier and visual closure. In the scenes set inside the building, the dominating darkness is a source of permanent bleakness.

Shadows, bars, wooden posts and narrow corridors are other visual obstacles which reinforce the feeling of loss and imprisonment. The fragmentation by means of frequent close-ups and unusual camera positions (low and high angles) contributes to a dynamic framing which challenges the geometrical orderliness of Japanese architecture. The landscape, the torrential rain in the last part of the film and the gloomy interiors in which light is only filtered through the shōji are material representations of the sombre landscape of the soul.

Sadashichi’s attempt to save Tomijirō is filmed as a circular movement of lanterns and bodies. This geometrical figure is a reference to Buddhist thinking – the perpetual circle of pain in which humanity is caught but which selflessness can open up to reveal knowledge and enlightenment.

Buddhist teaching permeates the film: in the circular movements of the lanterns, and in the many shots of the Jizō statues close to Ikuzō’s inn. This popular Bodhisattva is said to accompany the dead who could not be buried. It is a merciful deity which inspires hope and compassion, just as Inn of Evil does, a film which, despite its bleakness, depicts a community of outcasts and villains who constitute an island of humanity in an inhumane world.