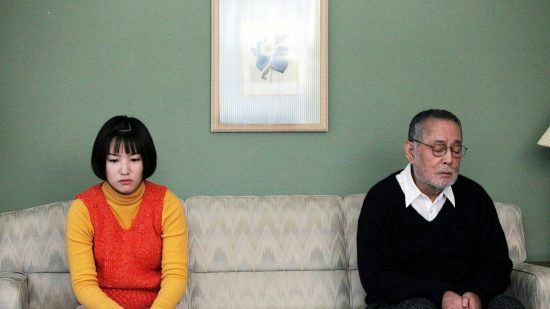 An angry-looking man hastily leaves a shabby house in the middle of nowhere, repeatedly throwing his walking stick to the floor. Each time, a young woman picks it up. The man is Tadao, the elderly protagonist of Haru’s Journey, played by the great Tatsuya Nakadai. The woman is Haru, his grand-daughter, sublimely interpreted by Eri Tokunaga. The old man is angry with his granddaughter’s suggestion that they should leave his home in Hokkaido. He deliberately endangers his life trying to cross heavy traffic, while a terrified Haru desperately tries to prevent him from being run over.

Tadao is stubborn and aggressive in a way you or I may well have encountered with an elderly relative who resists something you consider completely reasonable. Take the sequence in the noodle restaurant in which Tadao asks the waitress to wrap up the leftovers for him. Her grandfather’s request embarrasses the timid Haru, who looks as if she would like to hide in her bowl. She herself is as stubborn as the old man, but is repeatedly torn between frustration and her deep concern for him and his wellbeing.

The great achievement of the film is that it avoids the trap of stereotyping by creating complex characters. Tadao cannot simply be reduced to the caricature of a wicked old egomaniac: he is headstrong, not senile. He is a real individual, a man with a mind of his own. His way of speaking is gruff and hurtful, but he is far more open-minded than his older brother. He may lack formal education, but he gives constant proof of his wit and worldly wisdom.

Because of his physical handicap, Tadao moves like a crab, his upper body pushed forward. His strange swaying walk – an impressive tour de force for the actor, aged 77 at the time of production – and the aggressiveness in gestures turn his body into an instrument of resistance.

Frequent silences and long takes filmed with telephoto lenses create distance, both avoiding sentimentalism and preserving the dignity of the characters. At the beginning of the film, there is scarcely any dialogue. Repeated angry exchanges and abrupt gestures underline the misunderstandings between the two protagonists and their lack of proper communication. In the empty train they sit apart; on the road the old man walks ahead, Haru following him like an obedient wife or a servant. The journey from Hokkaido to the north of Honshū and then back to Hokkaido finally leads to mutual understanding between the two protagonists and reveals the complexity of their characters.

Director Kobayashi criticises the way modern societies treat the elderly. He references the long waiting lists for state-run retirement homes, which made them as inaccessible as the private homes which the impecunious Tadao cannot afford. He depicts unemployment and recession in Hokkaido which forces the elderly man to leave his home. And the empty streets and the indifference of passers-by when Tadao suddenly collapses suggest an increasingly isolated, dehumanised society.

Haru’s Jourrney addresses life’s most knotty issues: old age, society’s treatment of the elderly, poverty, despair, and conflict between generations. It’s a film that confronts us with our own fear of growing old. As the film progresses, it becomes easier to understand Tadao’s resistance, which is the very natural reaction of a man who has had to leave his home and change his routines.

Tadao is poor and ill, but during his journey he and the young woman grow closer, and finally decide to return to their modest home. Their strength of character leads them to decline the offer to stay with Haru’s father, and they run away from his house together – a funny, yet heartwarming sequence showing two people who not only have the same slightly awkward gait, but whose mutual understanding dispenses with any need for words.