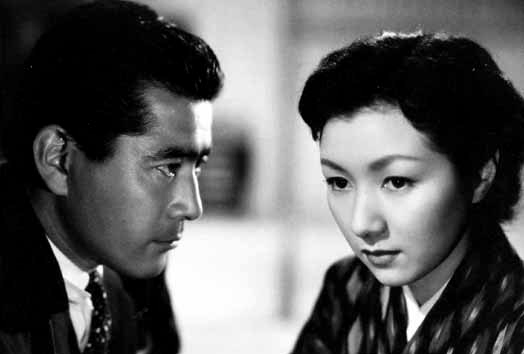 In Mikio Naruse’s 1956 film A Wife’s Heart, the family serves as a microcosm for tradition and changes in post-war Japanese society. It’s set in a provincial Japanese town in which cultural changes have been less extreme than in the capital: there are no modern office block towers, and both buildings and interiors are a mixture of Japanese and western styles. Whereas the matriarch ostentatiously displays her beautiful obi and always wears a kimono, her two daughters-in-law wear western clothes.

The mother of the family represents an old fashioned way of life. Following this traditional role model, the daughters do the housework and look after the elderly woman: in one shot, daughter-in-law Kiyoko is framed in the foreground cleaning a window, while her mother-in-law prepares a flower arrangement in the background, a visual reminder of prevailing conventions.

The mother complains when her daughter-in-law resists traditional behavior, and uses her power in the household’s hierarchy to make it difficult for Shinji, her son, to act against her wishes. The matriarch is neither the cliché of the tyrannical mother-in-law, nor is she a demon figure. She is a caring person who worries about her children and is troubled by the discord between her two sons, and a helpless observer of events beyond her control. As Zenichi puts it: “Mother, you talk about family, but family means something different today.”

Naruse is a master of undertones and portrayals of everyday life in which banalities are the catalyst for irritation. Small, insignificant events spark frustration, yet troubles evaporate as quickly as they arise, and life continues.

Most of the film takes place in interiors which are fragmented by sliding doors and furniture behind which  people listen, watch or sometimes hide, too ashamed to face the other family members. Dinners should be occasions that bring the family together, but Kiyoko’s absences, and shots that focus on just one character underline the lack of harmony hovering over the family.

These apparently unspectacular characters are set in a broader context evoked by word and image – the hardship of the immediate post-war years, Tokyo’s decadence, the construction boom and the economic problems of shopkeepers, a new, materialistic society and the changing roles of women.

When the mother proudly recalls that only two or three of the marriages she arranged have broken up, Sumiko points out that a couple staying together is not proof of happiness. However, a little later, she and her husband are happily reunited, while her mother has meanwhile found a suitable husband for Kiyoko’s friend. This matchmaking underlines how traditional role models still persist, a situation which Naruse explores by taking a lighthearted look at this old-fashioned Japanese lady.