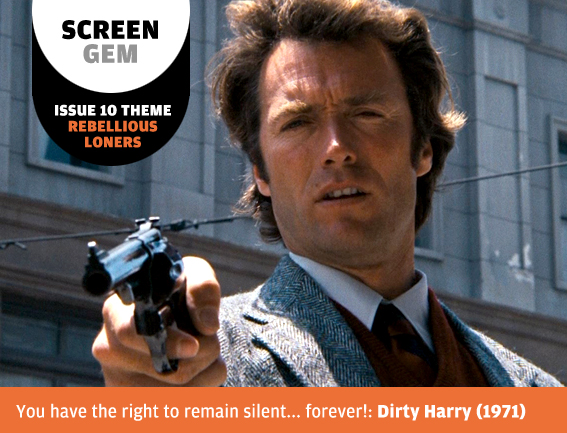 In Issue 10 of The Big Picture, we look at the significance of the cheroot smoked by Clint Eastwood’s Man With No Name. In this online companion piece, Scott Jordan Harris examines another of Eastwood’s famous onscreen items: the .44 Magnum wielded by ‘Dirty’ Harry Callahan.

Many of cinema’s most evocative objects are guns – but none is more iconic than (to quote Samuel L. Jackson in Pulp Fiction) the ‘goddamn hand-cannon’ carried by semi-psychotic police lieutenant Harry Callahan. The six shooter (the number of shots it is able to fire being crucial) makes a bigger entrance in Dirty Harry than Cameron Diaz does in Mask. When a band of bank robbers foolishly interrupts Harry’s lunchtime hotdog, he whips out the enormous phallic form formerly concealed in his clothing and blasts criminals, getaway car and standard police procedure all to Hell. In Taxi Driver, as Travis Bickle is arming himself for his ‘Dirty’ Harry-style scum-slaying, Robert De Niro’s character is told a .44 Magnum can kill an elephant; Harry Callahan makes it seem it could sink a battleship.

Impressive as the gun’s heist-disrupting firepower is, however, in this bank job scene it is words that speak louder than actions. As he approaches a suddenly supine perp about to reach for his own sidearm, Callahan gives the speech that ensures his Magnum’s immortality: ‘I know what you’re thinking: “Did he fire six shots or only five?” Well, to tell you the truth, in all this excitement, I kind of lost track myself. But being as this is a .44 Magnum, the most powerful handgun in the world, and would blow your head clean off, you’ve got to ask yourself one question: “Do I feel lucky?” … Well, do ya, punk?’ (All film fans know the words.  True aficionados know they don’t end with, ‘Go ahead – make my day.’ Harry saved that for a sequel.)

Part of the gun’s power is in its Old West associations. Just as ‘Dirty’ Harry is the lone gunslinger in an environment filled with timid, regulation-minding modern law officers, so his handgun recalls those carried by cowboys. Most of the gun’s power, however, is in its aforementioned phallic associations. It is often laziness that compels a critic to label a significant object in a drama as phallic, but here it would be lazy not to. Callahan’s character, his successes and setbacks all depend upon his ultra-masculine M.O. He is the most macho man in every encounter in each Dirty Harry film, and it is his oversized weapon that announces it. Its absurd size and threatening weight intimidate all, and are so unforgettable that, by Magnum Force, the gun’s name became eponymous. The .44 Magnum is as much the star of the Dirty Harry franchise as Clint Eastwood.