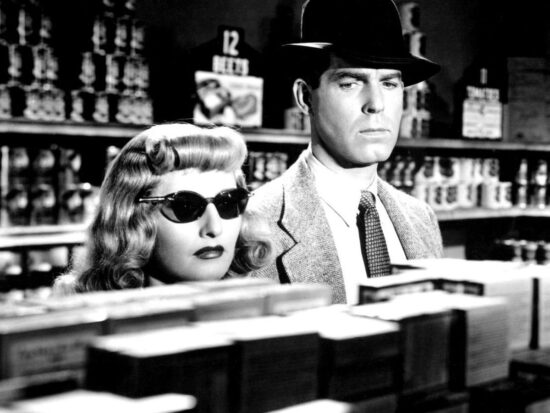 “The living room was still stuffy from last night’s cigars. The windows were closed and the sunshine coming in through the Venetian blinds showed up the dust in the air.”

The only time when Fred MacMurray’s Walter Neff is shown in broad daylight in Double Indemnity (1944) is when the flashback begins, right before he meets Barbara Stanwyck’s Phyllis Dietrichson. From then on, daylight only makes itself present through streaks of sunshine that come into interiors through the blinds of the windows, which are more likely to suggest his being trapped in his own destiny than reveal the time of day. There is no escape for him. It’s a feeling that follows him around at all times, a sense of darkness that takes hold of him, even if he is trying to keep it at bay with his cynicism and black humour. His apartment is rendered cold and strange, the Dietrichson mansion is menacing, stifling and shadowy, the office usually appears deserted – just a place where one can make a buck and take a shot at living – the phone booths and other urban spaces are dark, like un-mendable gaps in the urban grid.

In a genre that presented a world somewhere between pulp fiction and existentialism, where life had low values and an even lower running time, where love is hardly ever spoken of or felt (being replaced by obsession and fatal desires), where danger, vice, loneliness and fatalism meet the death of the American Dream, Double Indemnity is the darkest, most bitterly disillusioned and sinister film noir of them all. “Since Double Indemnity, the two most important words in motion pictures are ‘Billy’ and ‘Wilder’”, Alfred Hitchcock would say.

Double Indemnity revealed a groundbreaking, raw sense of bleak postwar urban reality, riddled with anxieties and rotten morality that weaved through American society. “We had to be very realistic…,” Wilder confessed. “You had to believe the situation and the characters… Double Indemnity was based on the principles of M… I tried for a very realistic picture… that looked like a newsreel. You never realized it was staged. But like a newsreel, you look to grab the moment of truth, and exploit it.”

Our anti-hero is cynical, tough and filled with greed. All his flaws surface when he is led astray by a desperate and dangerous dame who is plotting to murder and cash in the insurance after her husband’s death. He comes late to his senses, but only because betrayal is so sudden and striking. Phyllis has no sense of morality. She is rotten to the core.

When she first enters the scene, there is nothing much that she wears besides her bathrobe. But that little else, rings of gold and an anklet, is more than enough to paint us a clear picture. From the very beginning, accessories speak more about the character of Phyllis Dietrichson than her costumes. The clothes are smartly downplayed so that we keep guessing about the character. This time, it is not the costumes that trigger the exaggeration of femininity and artificiality, one of the defining elements of the femme fatale, but the finishing touches of her look. The oversized stone ring hints at the idea that she is onto a bigger life for herself. The anklet she wears is used to imply the male desire over and over again, emphasized by Neff’s constant, obsessive recollection of the anklet in his flashbacks, as a way to pass the Production Code’s censorship regulations: “I kept thinking about Mrs. Dietrichson and the way that anklet of hers cut into her leg.”

For their secret rendezvous at the supermarket, she is wearing everyday outfits, plain and masculine – be it a tweed vest, white shirt and straight-cut black skirt or a white blouse and tailored trousers with a high, belted waist – as if desperately trying to fit in the middle-class neighbourhood life. But everything else about her, from her platinum blonde hair and perfectly rolled fringe, to her bold lipstick that somehow cuts through the black and white of the screen, to her dark sunglasses, says otherwise. She doesn’t want to fit in. It is a desperate call that she is trapped in a suburban hell. The sunglasses, worn inside the supermarket, are a clear yet contradictory disguise – people didn’t wear sunglasses in films in the 1940s, unless for a cover-up. And it is not the police or the insurance company that Phyllis is trying to shield away from; it’s not even us, the viewers, because we have already been let in on the plotting. It’s the ordinary people, the likes of those in the supermarket. It’s they who can be more menacing than the police. Our two protagonists are ordinary citizens, too, an insurance salesman and a housewife who stop at nothing to escape middle-class angst. It’s exactly this idea, that there is something rotten in each and every one of us, that is so shocking about Double Indemnity.

When we see Phyllis Dietrichson with those dark sunglasses on, we realise she might just as well have worn them the whole time. Because her eyes never flinch. It’s just a dark void behind them. Barbara Stanwyck is the archetypal femme fatale, just as Double Indemnity is the archetypal film noir.