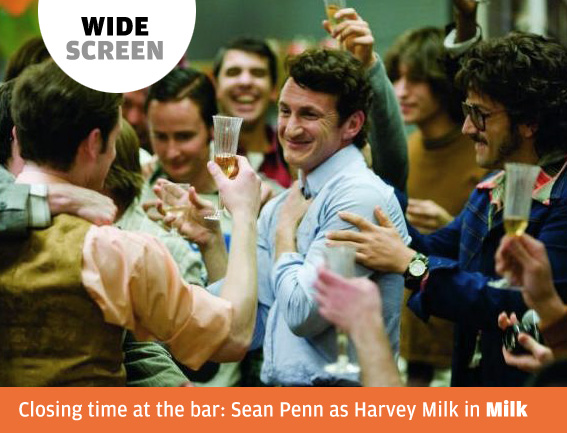 With popular Oscar-nominated films like Milk, Brokeback Mountain and

, everything in cinema these days seems to be coming up queer. It was recently reported that even Brad Pitt now wants a gay role to increase his credibility-factor. This heightening of gay/lesbian/queer/transgendered/bisexual representation in dominant culture has been delighting modern, progressive society for some time now, bolstered by the TV successes of Will & Grace, Queer As Folk, Queer Eye for the Straight Guy, and The L Word. However, the representations of queer culture in film for the last few decades has been anything but progressive. In fact, if you look at all the most popular and heroic depictions of homosexuals in film, you’ll notice one disturbing similarity:

Is the token homosexual character the new token black character?

A little history: In Henrik Ibsen’s 1879 play A Doll’s House , the main character Nora walks out the door on her overbearing and controlling husband Torvald, leaving him behind in search of a new life. Many scholars and dramatists have hailed this play as one of the first of its kind to espouse progressive feminist sentiments. And while Nora does embody a woman with burgeoning empowerment in a stuffy, severe Victorian regime, she, in a sense, dies as well. She walks out on the world of the play, restoring patriarchy back to its former state. The one unstable element to the rampant misogyny in the play has left. With no one left to fight, patriarchy is fulfilled and sustained. Likewise, Nicole Kidman in Moulin Rouge (an updated version of The Lady of the Camellias, or Camille as it’s popularly known), as Satine, finds redemption in love, but having enjoyed the sins of the flesh, the film insists that she pay the ultimate price. The whore dies. And patriarchy is restored.

This relationship is akin to the token black characters in films, where the black guy always dies first in horror movies. And now, with the surge of homosexual roles in popular motion pictures, the same is true. We may identify and sympathize with the burgeoning empowerment of the homosexual character, but once his/her exit has been established (i.e. death), dominant ideology is restored.

Gay screenwriter Arthur Laurents once stated, “I think the fate of gay characters in American literature, plays, films, is really the same as the fate of all characters who are sexually free. You must pay. You must suffer. If you’re a woman who commits adultery you’re only put out in the storm. If you’re a woman who has another woman, you better go hang yourself. It’s a question of degree. And certainly if you’re gay, you have to do real penance — die.”

Example number one: Tom Hanks in Philadelphia. His character, Andrew Beckett, is decent and honest and his plight pulls fiercely on the heartstrings of the audience. His story is one of struggle and triumph over injustice, when it is revealed that he was fired dually for his AIDS affliction and his homosexuality.  Through courage and strength of character he wins his lawsuit against those who have wronged him and infringed upon his civil liberties. And he dies.

Thus, dominant androcentric ideology is restored, for the one person in the world of that film who was raging against injustice has exited. More examples of this pathology include Sal Mineo’s character Plato in Rebel Without A Cause, Susan Sarandon and Geena Davis in Thelma & Louise, Audrey Hepburn and Shirley MacLaine in The Children’s Hour, and of course, Jake Gyllenhaal in Brokeback Mountain.

Homosexuals in motion pictures haven’t made the magnanimous strides we think they have. If they’re not maligned into a tragic-hero category, they’re depicted as either psychopaths (films likeCruising, The Fan, Windows, and even the Buffalo Bill character in The Silence of the Lambs are guilty of these sadistic depictions) or stereotypical flamboyant caricatures (The Bird Cage with Nathan Lane and Robin Williams, andHedwig and The Angry Inch are two films where the delightfully quirky protagonists slather their makeup on with a butter knife. Do they challenge the stereotypes? Sadly, no.)

That’s not to say that these previously mentioned films aren’t great films. Dramatically, they work well simply because the performances and narratives therein are compelling, engaging, dynamic, and reflexive. They make us feel, and that is the essence of good storytelling.

But at the end of the day, I can’t help but wonder when Hollywood will allow itself to create a kinetic, forceful, and true depiction of homosexuals where not one of them dies.

Brad Pitt, if you’re serious, I place that onus on you.