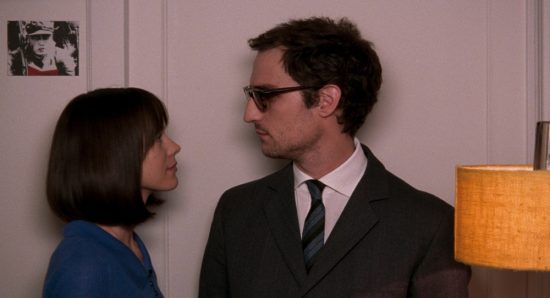 During the making of La Chinoise, Jean-Luc Godard – the renowned pioneer of the Nouvelle Vague –  fell in love with actress Anne Wiazemsky and later married her. She was his muse and his wife for 12 years.

Adapted from Anne’s own memoirs, One Year After, Le Redoutable is structured around Wiazemsky and Godard’s marriage, but set largely in 1968 against the background of the developing insurgency that lead to the May ’68 protests.

The film also about Godard’s life as an artist and the way his relationship with cinema was turned on its head during that crucial period when he was trapped between his ideological convictions and his reputation as a revolutionary filmmaker. It was during this politically committed period that he seemed determined to alienate anyone who’d ever loved his early work. 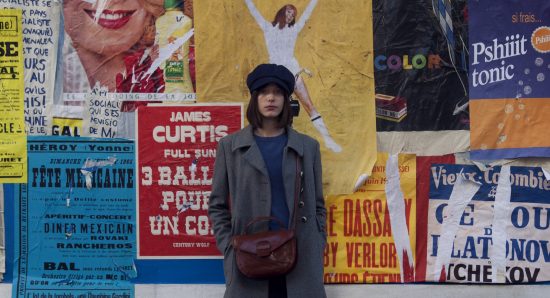 Brimming with pastiche, Le Redoutable elegantly employs some of Godard’s most famous filming style techniques (the use of primary colours to depict Godard’s apartment, voice overs, breaking the fourth wall, the back and forth camera tracking), in order to tell its own story with wit and humour.

It is not a shining homage to Godard, but rather a sharp portrait that pays Godard credit where he’s due. It’s not about simplifying the French New Wave talent so much as bringing him down to earth, and that’s where the film’s originality and strength lie. It beautifully captures the love story of two different artists trying to discover or rediscover themselves, and the costumes play an important role in telling the story and rendering the evolution of the characters.

In our interview, costume designer Sabrina Riccardi talks about the challenge of her first period film, about working with a director who understands clothes and about how she created all the costumes for the lead roles from scratch.

Le Redoutable is not only based on real characters and events, but also on the renowned pioneer of Nouvelle Vague and one of the most important figures of the world cinema, Jean-Luc Godard. Was it intimidating in any way working on the film?

Not at all, I was very proud and excited to take this challenge.

What was the most fascinating part about working on this project?

The challenge! It was my first period film. Then, the script, written with Michel’s finesse and humour. And this love story between Jean-Luc Godard and Anne Wiazemsky in the climate of the Parisian revolution of May 1968.

Where do you start and where do you look for inspiration for period films inspired by real life characters and events – in this case the late 1960s? What were your references for the wardrobes?

First, I read Anne Wiazemsky’s novels Une année studieuse –  which is about her meeting with Godard – and Un an après, which recounts the story of her life with Godard. Then I searched a lot of archives from that time, photos, ads, magazines, movies by Godard, Truffaut, interviews of Godard. I then made a costume moodboard that served as a guideline, which I showed to Michel. We discussed it, changed and rebounded and quickly, the different styles took shape in our heads.

For the extras, I got my inspiration from William Klein’s 1968 documentary Grands Soirs et Petits Matins. It’s a day-to-day testimony from the Paris of May ’68, shot during the events. There are testimonies of waiters, workers, students, unionists, pensioners, housewives, tourists. It was a huge source of information. 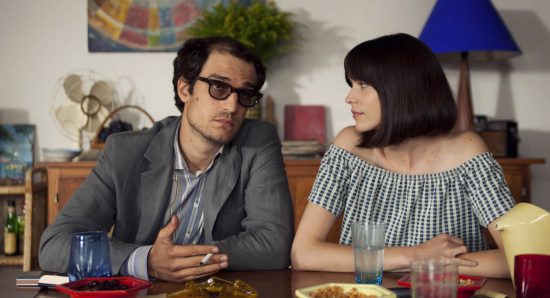 You have partly answered my next question. Did Anne’s revealing memoirs or director Michel Hazanavicius play a part in the costume process?

Yes. Michel is a real aesthete. So it’s a real pleasure for a costume designer to work with such a director. He carefully pays attention to details. Michel is a director who always takes you higher.

A costume designer’s job is to reinforce the story and help the actor form an identity of his/her character. But what exactly goes into the work of a costume designer today? How much is off the rack shopping, how much vintage and how much making did the costumes in Le Redoutable involve?

Most of the costumes for the main characters are creations inspired by archive materials that I had selected for the moodboard. For the extras, the costumes are real period clothing that we rented.

For Le Redoutable, I hired a tailor with his two assistants and a sewer to make all the costumes for the lead roles. He had my moodboard as a visual support and did an amazing job. He instantly understood what I wanted. I had the chance to work in a very big space so my whole team was concentrated at the same place, which was a huge asset to me. I was able to be available to everyone and therefore anticipate as much as possible.

I noticed a great attention to detail regarding the film sets as well, and especially the way the use of primary colours in Godard’s apartment and Anne’s clothes seemed to work as a whole. The film has a certain aesthetic.

We did a colorimetry work with Michel, meaning we made a stock of clothing that was blue, grey, beige and brown. Then I used primary colors – red, blue and yellow – on all the roles and extras by inserting them piece by piece in every plan, as with Godard’s or Truffaut’s movies of that period. Then they did the same with the decor. The visual effect is quite striking!

Anne’s character wears a mix of manufactured clothes, vintage and contemporary pieces. She is a young woman fascinated by Godard. She is still a student. In the beginning, I played with the twin set and pleated skirt and pea jacket combo in shades of blue and yellow to mark the difference between Anne and Godard’s universes. The more the story progresses, the more her emancipation and distance from Godard are shown through colour. I added red to her wardrobe, which symbolises her breaking free from his influence. 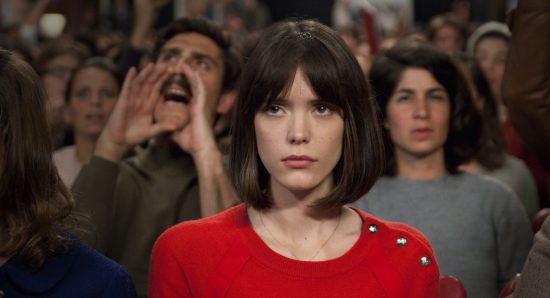 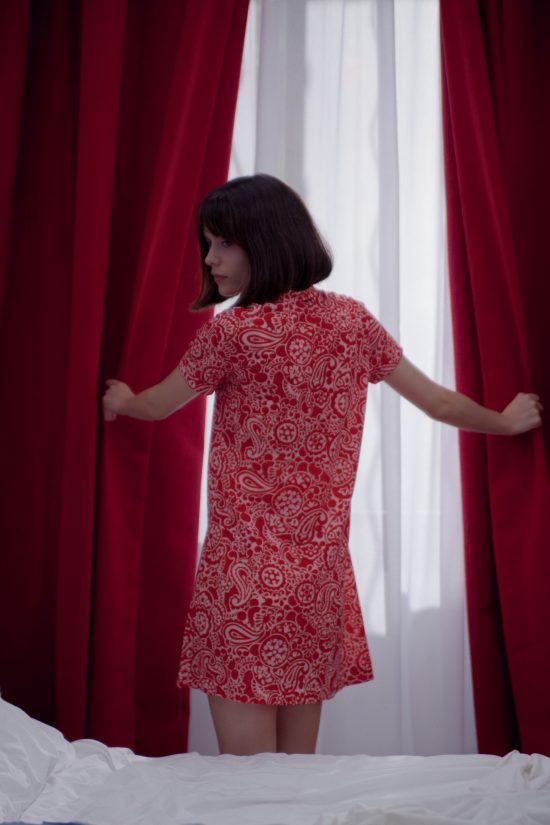 How about Louis Garrel’s wardrobe? His clothes reflect the evolution of his character as well.

Godard’s character’s wardrobe was entirely made to measure. I needed suits and shirts in triplicates for the falls. I got my inspiration from period vintage suits that I changed a little. I used a mixture of vintage and contemporary fabrics. It had to be perfect on Louis and he had to feel at ease in his costumes. Likewise for the glasses, we started from a vintage model that we manufactured to his measurements.

In the beginning of the movie, Godard’s suits are rigid. He wears a tie, his shirts are impeccably white. He is the fascinating, admired Godard! He is the Nouvelle Vague! The more we go on, the more we see his decline, we see how he rejects ‘Godard’; his wardrobe becomes crumpled and worn out, floppy. He barely changes his clothes. Unshaven, paler. Godard is not Godard anymore. 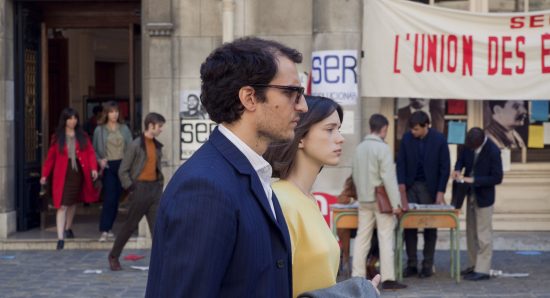 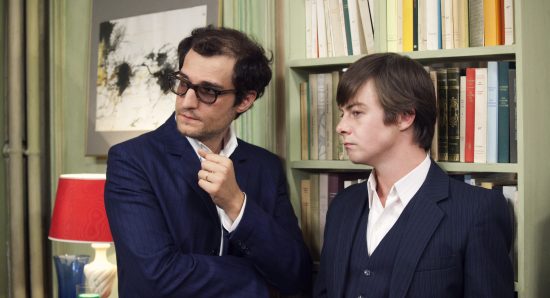 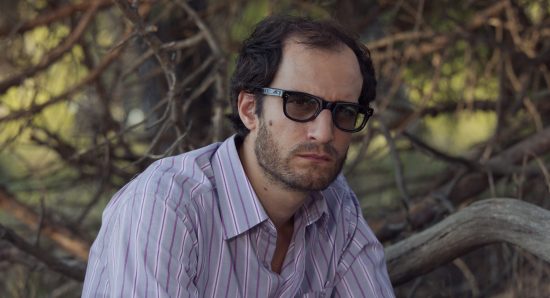 Bérénice Bejo plays Michèle Lazareff Rosier in the film. Rosier was a journalist and fashion designer who founded the brand V de V in the early 1960s, and in 1968 she was considered, alongside Emmanuelle Khanh and Christiane Bailly, one of the innovative and exciting young French designers. What was the inspiration for Bérénice’s costumes? Did Rosier’s designs play any role in it?

I created her wardrobe myself. It was my own vision. I was not influenced by the real Michèle Rosier at all. Quite the contrary, I dressed Bérénice modernly for that period, I made her wear trousers all the time in order to suggest her avant garde. In general, I am not really inspired by real life characters. We created them according to our own vision and desire and we wanted this to show.

What inspired you to become a costume designer?

I’ve always wanted to do this since I was a little girl. Cinema fascinates me and clothes inspire me. What could be more beautiful than having the chance to be part of the creation of a story? I began working in the movie industry as an assistant costume designer and, after some time, directors, actors and actresses asked for me on their projects and I became a costume designer.