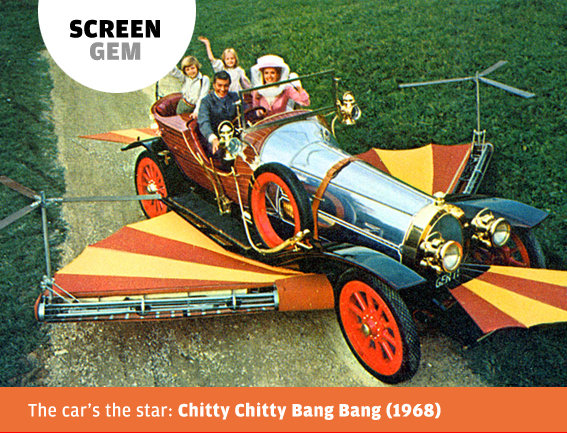 Chitty Chitty Bang Bang (or Chitty as she was affectionately referred to) was quite simply the most ‘fantasmagorical’ vehicle ever seen on the silver screen.  Though the film’s cast and locations were equally crazy it was the eponymous Edwardian racing car, from which the family favourite Chitty Chitty Bang Bang (1968) took its name, which was the real star.

Ian Fleming, the author of the children’s novel on which the smash hit was based, appears to have had a thing about cars.  His most famous creation, aside from the obvious Mr Bond, was something which though not readily associated with him, is all the same instantly recognisable to anyone with even a passing interest in film fantasy.  If Mr Bond’s gadget enhanced Aston Martin was the ‘male’ super-car personified, then the fuel guzzling oracle that was Chitty Chitty Bang Bang was its female counterpart.

As Caractacus Potts and his children sang on their way to a day by the sea, Chitty had the magical ability to provoke envy in everyone who saw her.  From her sleek lines and polished wooden bodywork to her sumptuous upholstery, she was the epitome of early twentieth century transportation.  More than that though, Chitty was part of the Potts family.  Much of the car, basic structure aside, was gleaned by her creator from his own ramshackle home and, from the moment the children first took their place on Chitty’s back seat, it was clear that they considered her a real person with feelings and emotions.

Though the Potts were a small and happy family unit, there was something missing – a woman’s touch.  In the end Caractacus got more than he bargained for in the form of not one but two females – Chitty, and the appropriately named Truly Scrumptious, daughter of confectionary manufacturing magnet Lord Scrumptious.

Fleming was very much a ‘man’s man’, as seen in his creation of James Bond, the ultimate male chauvinist super spy.  These traits were also reflected in the self-sufficient Caractacus, whose lack of domesticity revealed itself early on in Chitty Chitty Bang Bang with his madcap invention of a prototype vacuum cleaner which literally ate up dust, along with carpets and anything else which stood in it way.  His sexist attitudes were further emphasised when he berated Truly when they first met for her inability to master the basic rudiments of car mechanics.  However, as with Chitty, there was more to Ms Scrumptious than first met the eye.  Feisty and independent (few women in Edwardian Britain would have known how to drive a car let alone owned their own), she proved as the film progressed that she was no spoilt heiress and more than a match for whichever man she came up against.

In the film Chitty was a one off.  In reality however seven versions were made in order to recreate various effects, including a worn-out one, a restored one, one for the flying scenes and one for those on water.  As recently as 2011 one of the original cars was sold by a Californian auction house for $805,000 – not bad for a car which was originally heading for the junk yard had the forward-thinking Caractacus not stepped in and saved her for posterity.