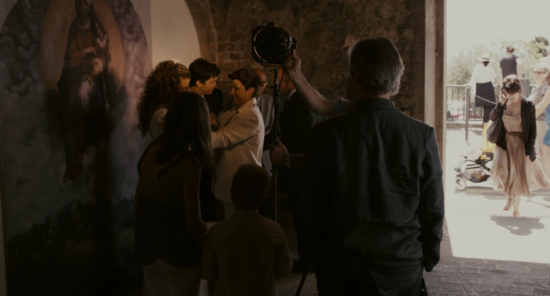 At first sight, Abbas Kiarostami’s Certified Copy (2010) is a linear story, a tale of two people who are trying to get to know each other through the course of an afternoon. The heroine, Juliette Binoche, who is not named, attends a lecture in Tuscany by an art historian, James Miller (opera singer William Shimell, in his film debut), who has written a book, Certified Copy, which carries the subtitle Forget the original, just get a good copy, about the validity of certified copies. She wants to meet him and leaves him the address of her antiques shop. He goes there to meet her and she takes him on a car ride through the scenic countryside to a nearby Tuscan village.

But there is more going on here than what meets the eye; there are side stories that provoke ideas, and the line between reality and fiction becomes wonderfully diffuse. The film is a deep and rich reflection on authenticity, in art as well as in relationships and life, and the two characters, during such a short period of time, in fact mirror the emotions from the entire life span of a marriage, with its ups and downs. I won’t say anything more, firstly for those of you who have not seen the film. But also because this is a story open to interpretations and with an open ending, and I am usually against talking about the specifics of a film, and, as a matter of fact, against movies that want to tell the audience what to think.

“I want to create the kind of cinema that shows by not showing. Some films reveal so much that there is no space for the audience’s imagination to intervene,” Abbas Kiarostami says in the book Lessons with Kiarostami. 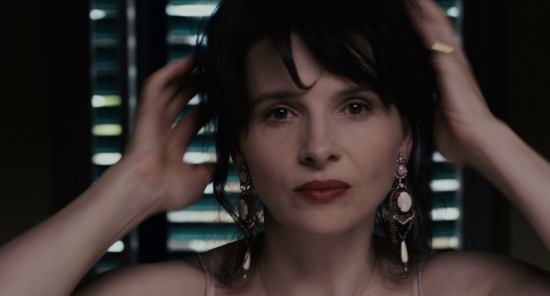 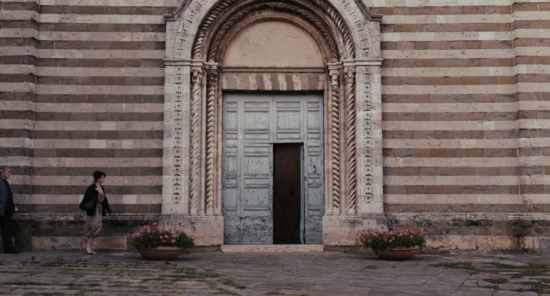 There is a scene in the film when Juliette’s character and James are nearing the end of the day and she excuses herself from the table in the restaurant where they want to have dinner and goes to the bathroom to freshen up. She is in front of the mirror and tries on a couple of pairs of earrings (first image in the set above). And I will quote Kiarostami once more: “When someone stands in front of the mirror, matching her inner feelings with her outlook is more important than matching the colour of her shoes with the bag she carries.” It is the first time she pays attention to her looks. When James came to her shop, she wasn’t expecting him; therefore, the outfit she was wearing and would wear throughout their day together was not picked out especially for the occasion. That image in front of the mirror reveals more about her emotions than words and clothes ever could. And it is just one of the sequences which convinced me that Juliette Binoche truly is that woman in the film.

Abbas Kiarostami was a director who usually worked with non-professional actors, because he wanted reactions as natural and real as possible from his film characters, and which he thought professional actors could only act, fake, not genuinely live on screen. But in Juliette he saw that raw quality of non-actors. “What pushed me to make Certified Copy was the intensity and enthusiasm of Juliette Binoche’s response to the story I told her, the reaction in her eyes, the spontaneous movement of her head. I never had any intension of turning that story into a film, and I am sure that had I told it to anyone else I would never have made Certified Copy,” he revealed. In this film, she transfers real life on screen, she is more than a “certified copy”. I am even reluctant in using the word “performance.” Those are raw emotions, she is a natural, the story awakens something in you, it feels real. And what, if not that, should anyone channel every single day? 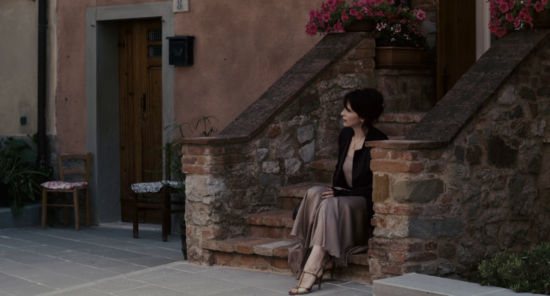 I think Juliette probably chose her own clothes, too. She became this character and she knew what her character should wear. There are in fact just two outfits. A green trench coat, t-shirt, black trousers and ballet flats at the very beginning when she attends the lecture, and then a silky, vaporous sand-colored dress cinched with a brown belt and worn with a black blazer and high-heel sandals when she’s driving James around. For once, I am not going to try and find symbolism in costumes. I will just take this second look in the simplest of ways: the perfect lightweight, minimalist look you effortlessly throw on for a tour of Tuscany on an adventurous summer day. And take the heels as the perfect excuse to go barefoot.