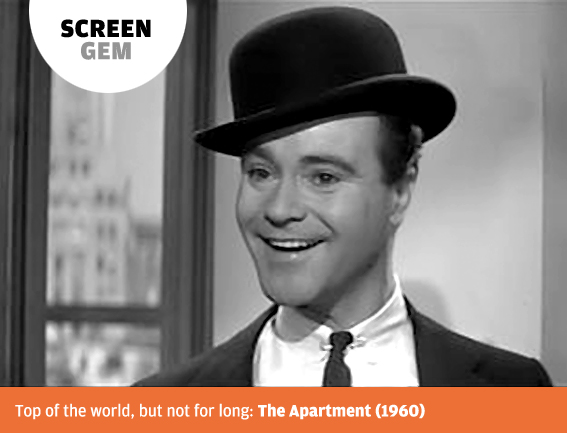 From the moment Jack Lemmon’s C.C. Baxter dons his new bowler hat in Billy Wilder’s The Apartment the film changes into a very different beast to what has come before. Baxter’s rise from struggling clerk amid the core of the 19th floor to 2nd administrative assistant with his own office is swift. The endless nights he spends outside his own home as his superiors dirty up his walls and ruin his record player needle are rewarded with the promotion he so desparately craves, and he in turn rewards himself with that timeless, elegant symbol of the working gentry, the bowler.

The Apartment is a classic, cautionary tale of getting what you wish for, and realising that you never really wanted it at all. It’s about being decent, and aspiring to do well, and keeping yourself to yourself and hitting personal milestones that make it all worthwhile and director Billy Wilder uses the symbolism of the hat, to highlight these themes. As we follow Baxter’s rise and his love for Shirley MacLaine’s elevator girl Fran Kubelik he wears the classic, working class trilby of the ‘schnook’ without ever realising that this is the hat he should wear. He aspires to the bowler and as soon he puts it on, seeking Miss Kubelik’s approval his world shatters. He doesn’t suit it, it’s not him at all and to compound things, it represents the reality of Miss Kubelik’s life to her.

She sees in it, the dreams she has chased, that will ultimately crush her, and in one pained expression shows us how sad, lonely, and misled she is. She lies to Baxter, saying it looks great, and moments later he finally understands the cost of his climb to the top as his clandestine hire arrangement and his love for Fran collide in a shattered hand mirror.

He departs the scene and takes solace in a dingy bar on Christmas Eve. He wears his bowler, and is surrounded by men who wear the hat he used to wear. He no longer fits anywhere. His new hat doesn’t suit him, but he can’t wear his old one. He is alone, and bereft. Here, the film slows, from quick-fire, shop floor rapid scenes to a long, executive paced sequence with Baxter mostly hatless, slowly coming to terms with who he really is and finding the courage to express his love to the elevator girl.

The path of true love however never runs smooth and Baxter is forced to choose between the morally bankrupt executive lifestyle he so craved or become a human being, a ‘mensch’ as his bewildered doctor neighbor describes. He chooses to be a ‘mensch’ dispensing of the bowler hat on his way from the 27th floor to the ground floor and out the door, onto the head of a bent over cleaner, rejecting all it represents, all he initially sought, for a life among the hatless, or the trilby wearing ‘schnooks’, hoping to hit the jackpot, Kubelik wise.