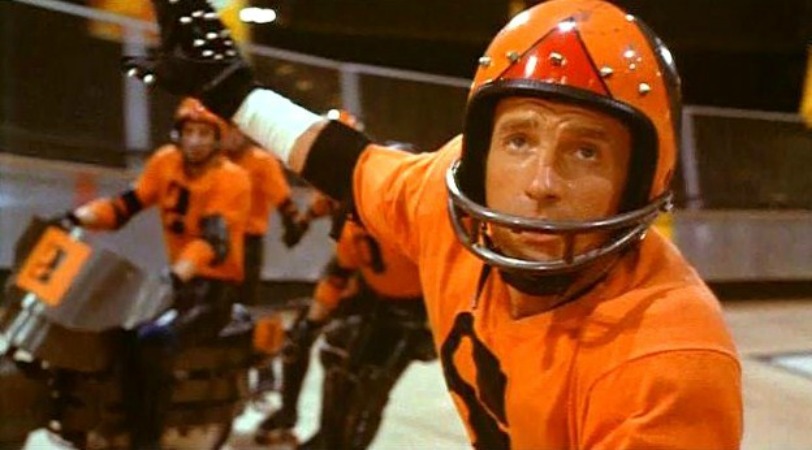 Norman Jewison’s Rollerball opens with the rituals of any sports match. The stadium is prepared, team executives shake hands, and crowds cheer as the players emerge. But one of the first hints that this is not sport entirely as we know it comes when the players stand not for The Star-Spangled Banner or God Save the Queen but for their ‘corporate anthem’.

In this dystopian future, a handful of titanic corporations own all the teams in the world’s most popular sport, rollerball. A match sees two teams, each with some players on roller skates and some on motorcycles, zoom around a circular track, with the aim of picking up steel balls launched onto the track and delivering them to a magnetic goal. It’s a full-contact sport and often gets violent – the most deaths in one match was nine, a statistics geek points out. The sport’s greatest player is Jonathan E. (James Caan), who’s been in this game for over a decade. But the Houston team’s executives decide to push him out, for reasons unknown, and he’s not too happy about this.

The rollerball sequences themselves are exhilarating, with fast-paced, bloody clashes and a pulpy sci-fi aesthetic which has made the film a cult favourite. Jewison and screenwriter William Harrison, however, are more interested in the behind the scenes goings-on. As Jonathan tries to resist retirement and find out why the higher-ups want him gone, the film takes shots at the corporate control of sport, a subject matter perhaps even more relevant today than when Rollerball was released. There’s a certain hypocrisy between the way the executives treat their star players with luxury – “this is your year”, the chairman enthusiastically tells Jonathan – and the fact that Jonathan has no actual control – even his girlfriends are chosen for him. 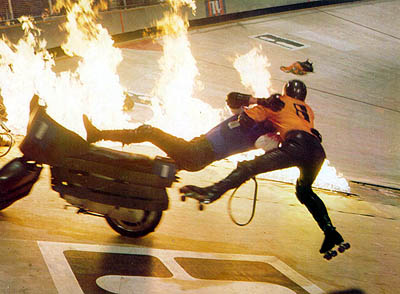 And yet, in this attempt at satire lies the film’s major flaw – whatever happens to Jonathan, he’s not got it too bad. He’ll either stick with the game and high-class life he loves or leave and live out retirement in peace. It’s a serious lack of dramatic stakes, which can be felt in Caan’s unanimated performance and in the drop in pacing whenever the film’s outside the arena.

Summing this problem up neatly, Jonathan at one point complains that he’s been left with a choice between luxury and freedom, a complaint which begs the question of whether everyone else in this world has the same choice; the tropes of the dystopian sci-fi genre would suggest that most have neither, but Rollerball’s focus on one superstar means we don’t really have any insight into its world as a whole. Underdog heroes may be a cliché of the sports movie, but they’re common for good reason, and this film, despite some very recognisable and effective moments of corporate satire, fails by taking the exact opposite route. The sport itself may be exhilarating and brutal, but Rollerball as a film is comparatively timid.