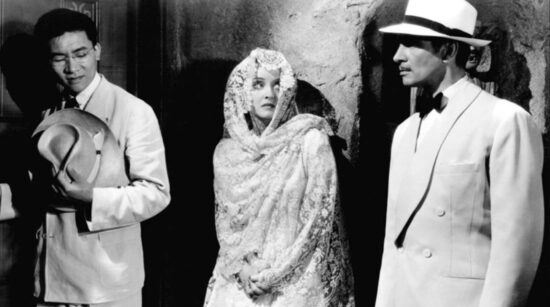 I recently re-watched The Letter (1940) on what was one of the summer’s first hot nights. Actually I may make it a summer tradition, to watch on an unbearably warm night. Because noir is the genre that offers the perfect contrast to my favourite season, to the bright and euphoric summer days. Watching noir films during summertime keeps me grounded: “Don’t kid yourself that this will last forever.” Because you almost do, don’t you, believe in an endless summer? It was perfect. Perfect from that great opening tracking shot, the silent, calm start as the camera slowly moves down the trunk of a rubber tree where the valuable substance drips into special collecting containers, across a compound’s thatched hut where native laborers listen to music and play games in the dampness and heat of the Burmese jungle after the working hours, and past a white cockatoo, revealing the background of a colonial veranda, when you hear a first gunshot followed by the flight of the bird and several other short shots as a man is fleeing in the night while a woman pursues him with a pistol.

William Wyler held his line and did one of the most beautiful opening shots in the history of cinema. The effect is striking. So is the atmosphere of the entire film, mainly shot at night, the moon light casting dramatic shades – and a spell, it feels, on the main protagonist, Bette Davis’ Leslie Crosbie, who always seems to be driven by its presence – through the shutters of the beautiful island home of the Crosbies or through the leaves of the jungle trees. You are in the heart of darkness, where evil inner forces can take control over your life, like a force of nature, or the moon, that disconsiders man entirely, can distort your reason and thrust you into downfall. And there is, of course, Bette Davis, breaking all the rules of a leading lady. 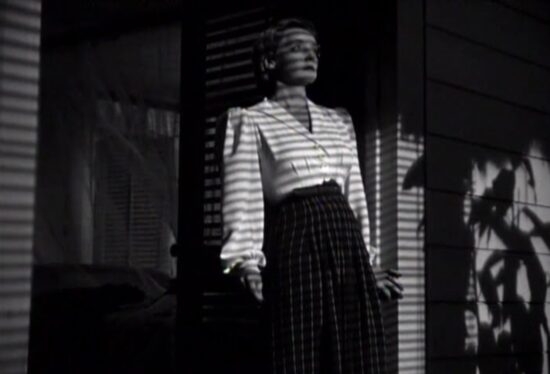 Bette Davis was dressed by Orry Kelly for the film. He was known as one of “The Big Four” – Adrian, Travis Banton, and Omar Kiam were the other three. “For my money, Kiam was by far the greatest,” Orry Kelly wrote in his autobiography. “Time is the best test – Omar’s clothes hardly dated.” But watching Bette in The Letter 81 years on, the same can be said about her costumes. Orry Kelly decided from the very beginning that the only way to be different from the others – “Adrian used elaborate embroidery on Garbo, Shearer and Crawford, while Banton dressed Colbert and Lombard in all-over beaded gowns” – was to avoid glitter. “Starting with Kay Francis, I designed simple, unadorned evening gowns – black velvet, white, beige and black chiffon or crepe. I introduced what was the forerunner of the shirt maker dress for evening: taking the daytime sportiness with kick pleats, I dropped those to the ground, using tailor arrowheads where the inverted pleats met. At first, only those with sensitive taste were impressed,” the designer would confess.

Bette is dressed in simple evening gowns or streamlined looks, white shirts with dark coloured knee- or floor-length skirts – the long skirt has stripes and a high waist, lending a commanding, elongating quality to the silhouette, like a pair of trousers. In fact, Leslie is often seen wearing white throughout the film, the most suggestive being her floor-sweeping, short-sleeve white dress with a white laced shawl wrapped around her head when she goes to retrieve the incriminating letter from the dead man’s wife he had just married, Mrs. Hammond. Repeatedly wearing white, Leslie Crosbie presents a heavily consistent image, a controlled appearance that also reflects her control over the action and the characters around her. She is often shown knitting lace in tense moments and that takes a lot of concentration and patience, as her lawyer aptly observes. And white is the personification of innocence, but in noir film, and in a femme fatale character, it exemplifies inverse symbolism, at the same time questioning and underlining her duplicity.

There have been other white-wearing film noir heroines who commanded the screen with ferocity – Lana Turner in The Postman Always Rings Twice, Jane Greer in Out of the Past, Rita Hayworth in The Lady from Shanghai – but none of them had the audacity of Bette Davis’ Leslie Crosbie, who not only inverts the symbolism of colour, of good and bad, but ironically inverts the roles of bride and mistress. She is trying to weave an intricate veil of innocence around her and she pursues it to the extreme. Dressed in immaculate white, she ensnares everyone to ensure the success of her scheme and doubt her dark impulses. And it does seem to work for everyone around her, mainly the men, especially her husband, but not Mrs. Hammond, the widowed newlywed, who orders Leslie to take her lace shawl off before she can have the letter. Bette stands tall, but she obeys. How telling that confrontation scene is for the role of the femme fatale in film noir, whose complexity is often evoked in her appearance but never fully grasped by the men who fall for her and blindly chart a course through a disillusioned or fated life.