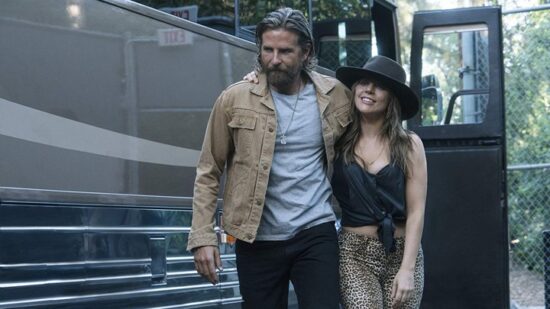 As he is spiraling down, she is blossoming. He is a seasoned, hard-drinking country-rock legend, she is a talented newcomer who is just starting to find success. He is a tormented man clinging on regrets of the past, she is a rising star. But it is Bradley Cooper’s Jackson Maine, not Lady Gaga (Ally), who is the rough, scarred heart of A Star Is Born (2018), and the one you root for. And his clothes are there to prove it.

Jackson Maine is weathered and behatted, with a sun-burnt authenticity, grave voice (Cooper worked with a vocal coach to approximate Sam Elliott’s gravelly delivery before even approaching Elliott about playing his character’s brother, Bobby), greying beard and long, swept-back hair, and a sexy weariness. His clothes look lived in. Not only in the sense of he’s had a few too many drinks, been up all night and out of it all day kind of lived-in (although he’s certainly done that on a regular basis), but also in the staying true to his self kind of lived-in. Jackson Maine retains his core of integrity; that is something that has not been eroded by alcohol. 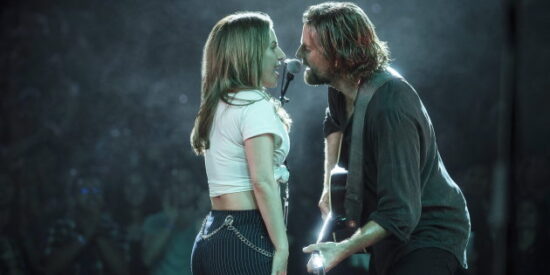 His sturdy black or faded blue jeans, denim jackets, plain shirts and t-shirts, leather jacket, and western boots are his apparel of choice, his natural habitat rooted deep in the American grain, just as his country music is, just as his outwardly rugged, inwardly ruptured American masculinity is. If he dressed otherwise, he would look misplaced. He lets his music guide the way he dresses. His songs come from life; he writes what he lives, just like his clothes are part of who he is. He is consistent with his disheveled, effortless, functional, earnest clothing, just as he is with his music. He is “a man who wears his hat all the time except for when he’s singing — usually musicians wear their hats to sing but take them off afterward,” wrote Taffy Brodesser-Akner for The New York Times. “Not Jackson. He’s only vulnerable on a stage.”

His clothes (Erin Benach – The Place Beyond the Pines, Drive – was the costume designer) can even be interpreted as taking a countercultural stand. He stands by what he believes in, no matter what. And he expects the people in his life to abide the rigours of that same ethic. When it comes to his relationship with Ally and to her stardom, it’s not the fact that she finds success that bothers him, but the fact that she lets the industry strangle what she wants to say through her music in order to fit the mainstream. It is the rupture of values that disturbs him the most. At the beginning of the film, when Jackson and Ally are at a bar right after he heard her sing “La Vie en rose,” he tells her: “Talent’s everywhere, you know, everybody’s talented at one thing or another, but having something to say and a way to say it, that’s a whole other bag.” He doesn’t change his shirt, figuratively speaking. 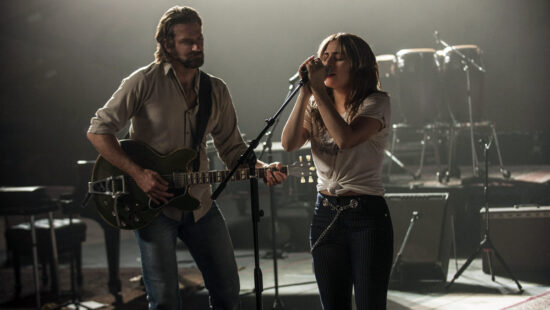 Director/co-screenwriter/actor Bradley Cooper inhabits his role with an unerring accuracy and unsentimental understanding. Lady Gaga is very good in her first major role (and she does get all the accolades for it this awards season), but it’s Bradley’s performance that is pretty damn spectacular. And it is what makes the film what it’s always supposed to have been, in all of its four iterations (although it has not always succeeded): an artists’ duet. Jackson and Ally are in this together. They are both in love not only with each other (there is such chemistry between the two), but also with each other’s talent, and that’s the beautiful part, that’s why the film stands apart. It is openly and resolutely orchestrated to elicit an emotional response. But I don’t care, because it does it so well. It can’t tell you what to feel, but it makes you feel deeply… and sing “Shallow” again and again and again. 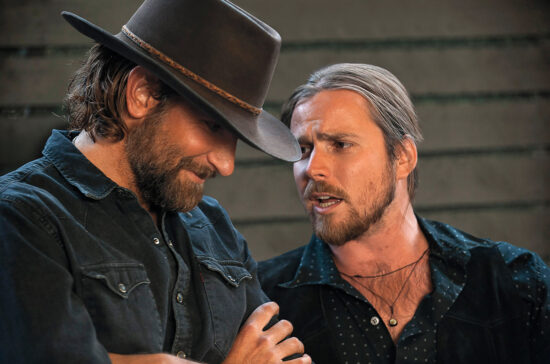 One reply on “Bradley Cooper’s rugged, real style in A Star Is Born”