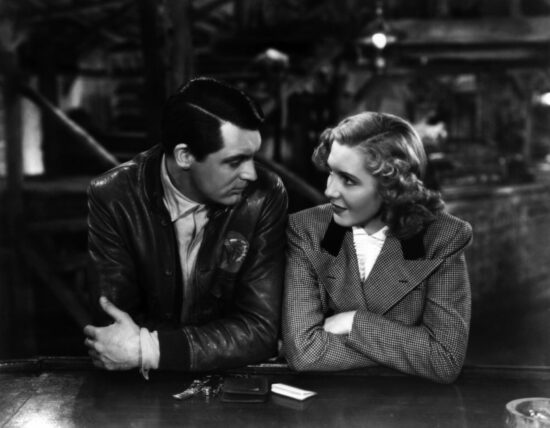 They are men who are staring down death as they are flying dangerous missions over treacherous mountain terrain, come rain, shine or fog. The short landing strips are no less hazardous. They have poor navigational equipment and makeshift planes, but they are hard-shelled and have an unconquerable spirit. It’s an electrifying, fast-paced, past-the-edge-of-yourself world, one of Howard Hawks’ fantasy worlds, a place for world-weary romanticism, borderline cynicism and crazy courage. Hawks was an aviation enthusiast, a born storyteller and an “invisible director”, François Truffaut described him, because his “camera work is never apparent to the eye”. Seldom have I seen this abundance of life effervescence, verbal sparring and sense of fleeting existence better depicted on screen.

“One day the stars will be as familiar to each man as the landmarks, the curves, and the hills on the road that leads to his door, and one day this will be an airborne life. But by then men will have forgotten how to fly; they will be passengers on machines whose conductors are carefully promoted to a familiarity with labeled buttons, and in whose minds knowledge of the sky and the wind and the way of weather will be extraneous as passing fiction,” pioneering aviator Beryl Markham wrote in her book West with the Night, recounting the early frontier of flying at just the same time the story in the film takes place.

This is one such story, from the days of the pioneering aviators. These daredevil pilots in Only Angels Have Wings (1939) seem to have forgotten everything but how to fly. They live up in the air, they don’t have a home and whenever they are not in the air they get by at Dutch’s – restaurant, bar, hotel and airmail company headquarters all in one. Some survive the missions, some don’t. But not because they are bad pilots, but because they dare to go where nobody else has. “If a man has any greatness in him, it comes to light, not in one flamboyant hour, but in the ledger of his daily work,” to paraphrase Beryl Markham again. The ones who survive have to forget easily, usually washed away with a round of celebratory drinks, because that’s the world they live in. The soundtrack is missing in Only Angels Have Wings. It’s just source music and the sound of the airplanes. “Live for today” is what they believe in. They also believe in one another. There are not many words among them, they trust and respect one another and the only thing they need to know before making one their own is if “he is any good”. And all they need to know to distrust someone is if he bails out on another colleague to save his own neck. They are defined by their professionalism. They do the job nobody else would.

It’s a man’s own land, “a tribute to man”, Truffaut would call Hawks’ adventure films. A world we are familiar with in his movies. But in his world, women are always welcome. They are strong-willed and up to stand up to the hard-boiled men they fall in love with.

There is something else that unites these buddying flyers. A code of dressing. They all wear leather flight jackets. It’s bomber jackets (the A-1 or A-2 jackets) – the style that became popular under the name of bomber jacket even though its use was not restricted to bomber crews – or variations thereof (some are lapel-collared, zipped-up, waist-long but with no knitted arm, collar or waistband, and no pockets; others are straight-cut, thigh-long and button-fastened, with side pockets). Howard Hawks was very particular about every detail in his films, costumes included. He was also a pilot himself and a director not of his first film about aviation (Ceiling Zero, 1936, with James Cagney in the main role, was another story about airmail pilots battling bad weather). He sought to give his characters credibility, as tough guys and pilots, so he naturally turned to the flyer’s jacket, steeped in utility and heroism.

It’s Cary Grant and one other character who wear button-fastening bomber jackets. I initially took it for an A-1 jacket, but while doing research for this article, I came across this piece on BAMF Style, that goes in such great sartorial detail, and found out it is in fact a variant of the style, the 37J1, which retains much of the cut and structure of the A-1, but has raised pockets as the most obvious differentiation. Cary’s jacket also has a left breast logo and a drawing on the back, recalling to mind the official service attire. The first airmail pilots were usually war pilots looking for a job they were good at and about the only ones willing to take on the dangerous job of airmail pilot, film scholars Craig Barron and Ben Burtt explain, in a time when the rules of aviation were just being learned. Cary’s leather jacket may suggest his character was a World War I pilot himself. “The rear of a flyer’s jacket was an ideal spot for recording his tours of duty,” Josh Sims notes in his book Icons of Men’s Style.

The characters in Only Angels Have Wings were based on a group of pilots Howard Hawks had briefly met in Mexico while scouting locations for Viva Villa! (1934). ”Collectively and individually they were the finest pilots I’ve ever seen but they had been grounded because of accidental drinking, stunting, smuggling – each man’s existence almost a story in itself.” He wanted to use “the background of this group of men and their spirit” as the starting point. But, as Todd McCarthy notes in his book Howard Hawks: The Grey Fox of Hollywood, the main source of inspiration may have been a short story called “Plane Number Four” by screenwriter and former magazine feature writer Anne Wigton.

The leader of the group Hawks had met in real life was Tex, and he was to be the main character in the film. “You could only guess at his history, because he didn’t talk much even when drinking – and that was most of the time. […] He ran the outfit the only way it could be run – by complete domination – what he said went and everybody knew he’d do twice anything he asked to have done,” Hawks said about his leading man inspiration. In the film, he takes the name of Geoff Carter, and is played by Cary Grant, found here at his darkest, toughest side. Carter is the most daredevil of them all. He is the boss of the freight company and the chief pilot. He was in love once, but he found out that women and flying don’t match, so he hasn’t put his trust in any other woman since. 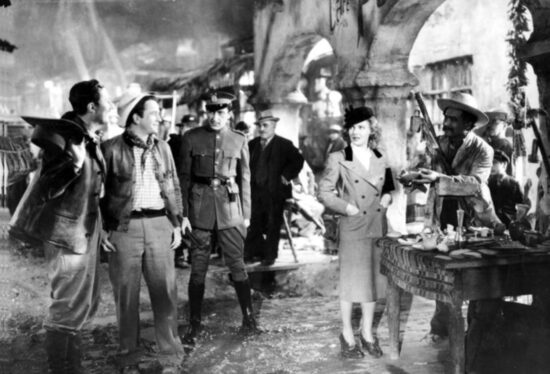 The Hawksian woman is just as much part of Hawks’ universe as his tough men are. “Just before I met him, Tex had married Bonnie – they were a great pair. She was blonde, pretty, full of life and a great sense of humour… Outwardly unlike Tex, she was strangely like him otherwise. She loved flying as much as he did, not just the riding around but the strange love for the air that men had. Bonnie had been married before to one of the other pilots. He had been killed and she had drifted and knocked around until meeting Tex.”

Bonnie Lee: “That’s the most wonderful thing I’ve ever seen” (when she first sees one of the planes taking off).

Bonnie Lee: “No, it didn’t. It’s really a flying human being.”

She seems to get it. What Beryl Markham said. 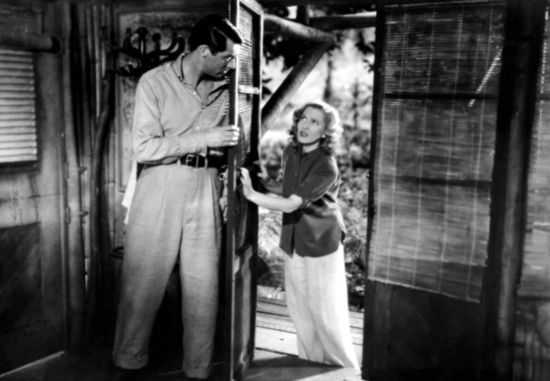 Geoff Carter’s woman is played by Jean Arthur. According to the book Howard Hawks: The Grey Fox of Hollywood and the sources stated there, Hawks was not content with Jean Arthur. She was one of Columbia’s top female stars and featuring her was the deal if he wanted to retain control over the production. “She was simply too wholesome, irrepressibly upbeat, and unironical to fit comfortably into Hawks’ world. She was not adept at improvising with the quicksilver Grant, and when Hawks would try to direct her to act in a sexy, subtly immersing way that he liked, she simply refused saying ‘I can’t do that kind of stuff'”.

I’m not quite sure I agree. Bonnie Lee immediately fits in. In the fictional town of Baranca (which was actually built, so incredibly realistically, in Los Angeles, at the Columbia Ranch), in the story, in the men’s world she finds there. Bonnie Lee is a travelling entertainer who gets more than what she was expecting when she stops in the South American trading port. She is blonde, pretty, spirited, charming, good-humoured and a team player from the very beginning. In one of the first sequences in the film, when Bonnie Lee takes a seat at the table with the two pilots she had just met and they take off their hats, she takes hers off as well, although the etiquette didn’t dictate it. But take it off she does, ready to hold her drinks.

“Howard Hawks was one of the first directors to show women as self-confident in a male group, even sexually aggressive,” Elsa Martinelli, the leading female character in Hawks’ Hatari! – where men and women share spaces, professions, friendships, and Safari clothes – said in an interview for Cinema Retro magazine. In her houndstooth wool skirt suit, Jean Arthur foreshadows the ultimate Hawksian woman, Lauren Bacall in To Have and Have Not, whose costume would in turn be inspired by Hawks’ glamorous wife, “Slim”. Actually, Jean Arthur’s suit, with its straight cut and coupled with a timeless, buttoned-up white shirt looks much more modern and menslike utilitarian than Bacall’s peplum jacket suit.

Bacall would be a revelation in 1944, paying opposite Humphrey Bogart in her debut role, as she showed that she could crack wise with Bogie, measure up to his personality and be even “a little more insolent than he was”, in Hawks’ words. The sexual spark between Bogart and Bacall may be missing here, but by no means does Arthur lack allure and verbal wit, and she is certainly paired convincingly with the men. And if we have any doubt she is a trailblazer, we shouldn’t when we see her sporting wide-legged trousers and loose-fitting shirt a little further down the plot, just about when she eavesdrops on Carter when he has a visit from that one particular woman from his past. Twenty-year-old starlet Rita Hayworth is in the part of Judy MacPherson, now the wife of another pilot. Hayworth’s tremendous sexual appeal is already palpable and it makes me even more surprised about Hawks’ remark regarding his discontent with Jean Arthur’s performance. Surely, he wasn’t looking to duplicate the woman from Carter’s past. The one who would ultimately turn Carter again towards women would have to be different. Jean Arthur’s Bonnie Lee is different. She is not some star-struck lady in waiting, she is more likely willing to be part of the men’s activities, of their world. She is part of the action. 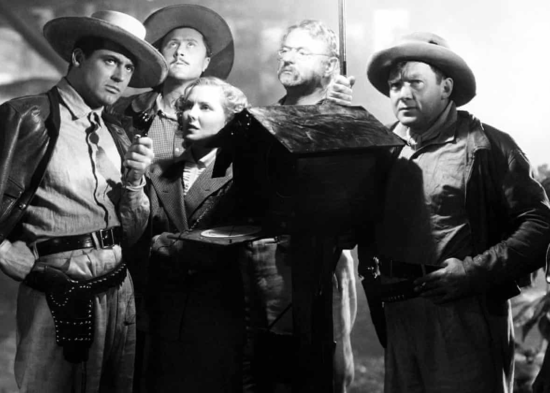 editorial sources: Howard Hawks: The Grey Fox of Hollywood, by Todd McCarthy; The Films in My Life, by François Truffaut; West with the Night, by Beryl Markham; Howard Hawks and His Aviation Movies feature with film scholars Craig Barron and Ben Burtt, available on the Criterion Collection blu-Ray edition; Icons of Men’s Style, by Josh Sims; BAMFstyle.com