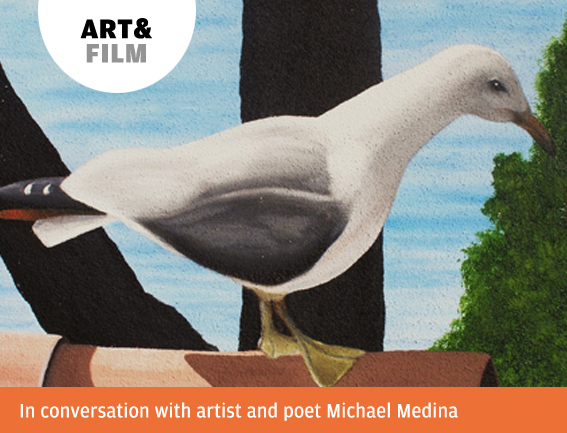 Michael Medina‘s paintings, and impassioned discussions of them, proved too much to contain in one issue of The Big Picture. Here, in the final part of his conversation with Scott Jordan Harris, he discusses Grace Kelly, Children of the Corn and the Antichrist.

In Issue 7, you told us how, after contracting meningitis at a crowded screening of Titantic in 1997, you nearly lapsed into a coma. Semi-conscious, you experienced the hallucinogenic visions, filled with images from film, which inspired you to paint. Those visions, combined with your love for movies, have inspired more than paintings, haven’t they?

Yes. As my recovery drew to its end, my love for painting, poetry, and films deepened. Since then, I’ve continued to paint and have published my first book of poems, Funny Bone Boulevard (a reference, of course, to the classic 1950 film Sunset Boulevard).

I’m also an Art teacher now, and I treat my course as a makeshift ‘Film Preservation’ class. Those who’ve had me as their teacher have seen most, if not all, of the following films: Safety Last (1923); Modern Times (1936); The Wizard of Oz (1939); E.T. (1982);Robert Altman’s Popeye (1980);Merchant Ivory’s Surviving Picasso (1996);as well as some other underappreciated, contemporary films like: Mirrormask (2005); Lemony Snicket’s A Series of Unfortunate Events (2004);and Takashi Miike’s masterful kitsch piece, The Great Yokai War (2005).

It may not be obvious, but Seagull of Monaco is a tribute to Grace Kelly. Why did you choose to celebrate Kelly not with a painting of her, or inspired by one of her films, but with a picture of a bird?

It was 2008 when my wife Viviane and I booked our Mediterranean cruise. Before we left, we spent the last few nights at home watching films based in the South of France, like To Catch a Thief (1954) with Grace Kelly. Finding ourselves, a few days later, on the eerily peaceful streets of Monaco, we came to the cathedral there. Working our way around its interior, we stopped at one point to take a picture. Brushing my lower leg against a velvet rope, I looked down and realized that I was stepping on Princess Grace; I wasn’t aware she was buried there. 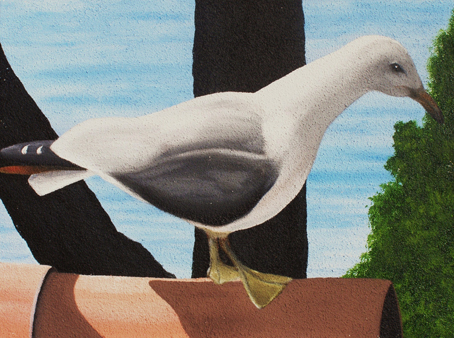 Overwhelmed by my discovery, I left to collect my thoughts. My wife followed me across the narrow street and, when we stopped to face the sea, I raised my camera to capture the glow of the Mediterranean. A large seagull landed softly on the terracotta ledge in front of me. I photographed that moment, knowing that as soon as we had made it home, I would paint that graceful image in a tribute to the gracefully charming Princess of Monaco, whose grave I had stepped on.

Is it true that your painting The Final Harvest is directly inspired by one specific scene from Children of the Corn?

Much like Seagull of Monaco, The Final Harvest, although not a conventional depiction of an actual film still, is still inspired by a particular scene in a movie. The moment comes early In Children of the Corn, as Isaac (John Franklin) peers through the window of a local diner, watching his brainwashed clan enter the establishment, locking the door behind them. With the light of the midday sun creeping through the interior, the children exact their judgment upon the town’s people, slaughtering every single citizen in sight, save the young boy who details the account. At this point, the camerawork gets as creepy as the kids. Quick pan-shots and jump-cuts invade the rest of the scene to show the place now flooded with splattered blood. With the massacre completed, and the nerve-splitting score now silent, the children calmly leave.

As for my painting, the red flecks of acrylics – intended as a reminder of the blood in that graphic scene – were sprayed unto the canvas with a toothbrush. The yellow pillar clearly represents the corn that’s so prevalent in the story, while the blade-like ears on either side bring to the mind the children’s green-tinged killing. The less obvious inclusions are perhaps the white boxed symbols at the bottom of the picture plane. Primarily, they’re inspired by the haunting image of a jukebox resting at the booth of the scene’s first victims. 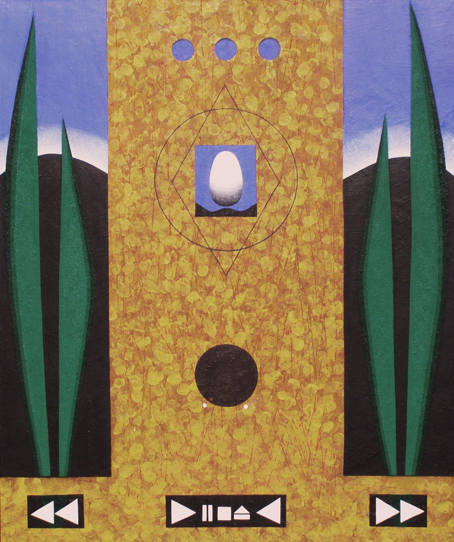 The central component in the composition, the egg, with its three parts – shell, white, and yolk – addresses, oddly enough, the triune nature of God (The Father, Son and Holy Ghost). The Children of the Corn’s Biblical bent was actually the driving force in the creation of the painting. The work is a cautionary tale of sorts, since I’ve always regarded Isaac and Malachai (Courtney Gains) as a neo-Antichrist and a false prophet, respectively.

In The Book of Revelation, the Antichrist, with the help of his False Prophet, deceives the spiritually lost in the final days of the world as we know it. Mentioned in the following chapters of this passage, in Scripture, is an apocalyptic judgement on those who have pledged their allegiance to the Antichrist, as the wrath of God is revealed in this last reaping of souls. Hence, the title of my piece: The Final Harvest.

Read the first part of this interview in Issue 7 of The Big Picture magazine, available from independent cinemas nationwide and as a downloadable pdf from the download section