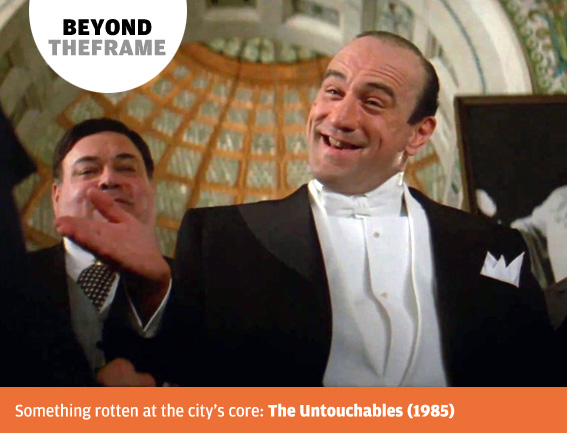 By the end of the nineteenth century the population of industrialised nations had shifted decisively from the countryside to cities. Work was the driver, but such vast numbers of people in close proximity also gave rise to new forms of relaxation, and to new kinds of transgression. The Impressionists were the first visual artists to document the streets, bars and music halls of this chaotic milieu but film-makers soon followed and the city has been filmic shorthand for wealth, anonymity and immorality ever since.

Chicago, America’s ‘second city’, grew rich from shipping, rail and trade, giving rise to that symbol of success, the skyscraper. This was the background for the Prohibition-era war between organised crime and the law dramatized in The Untouchables (1987) from director Brian de Palma. Gangsters and Treasury agents are interwoven with the city’s graceful architecture, including the Moderne-style Chicago Board of Trade Building, the Neoclassical temple that is the former city library (now the Chicago Cultural Center) and the richly carved Rookery Building. Fittingly, the drama climaxes within the soaring marble halls of Union Station, where rich and poor, honest and dishonest mingle and sometimes collide. 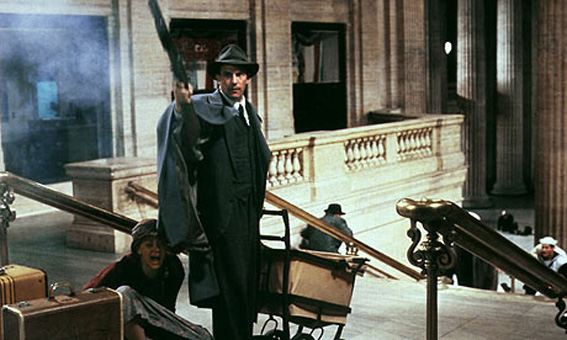 Hitchcock’s North by North West (1959) sees a New York advertising executive’s comfort and security overturned as his moneyed milieu is punctured by enemies who hide in plain sight. Betrayed by the very trappings of achievement he enjoys, Roger Thornhill finds mistrust and suspicion in every part of the city and is only able to triumph far away from it. For the opening sequence of West Side Story (1961), director Robert Wise elegantly punctures the glamour of that same city to expose the racial tensions and casual violence present in the endless grid of its streets. In a series of God’s-eye tracking shots, an aerial camera passes over the skyscrapers of Wall Street, the United Nations building, Columbia University, housing projects and endless brownstones before finally halting at a fenced playground where the Jets gang waits. Emphasising the point, location shooting took place on West 68th Street which was demolished as soon as filming was complete in order to build the plush Lincoln Centre arts complex.

For Clint Eastwood’s Walt Coogan, too, the Big Apple has a rotten core. In Coogan’s Bluff (1968), directed by Don Siegel, the city is as harsh and unwelcoming as the desert the Arizona deputy sheriff has left behind. The glamour represented by a helicopter transfer from the airport to the roof of the Pan Am building is undermined immediately afterward by a taxi driver’s calculated attempt at overcharging, whilst the inhabitants of a counterculture bar and a pool hall prove treacherous and the local police chief is dismissive. The climactic  motorcycle chase takes place through an autumnally bleak Cloisters park. A museum populated with relics from medieval European monasteries, the location provides a subtle architectural commentary on the contrasting ethics of Coogan and his adversaries.

When Eastwood and Siegel reunited three years later for Dirty Harry (1971), the architecture of San Francisco played a similar role. For his first murders, sniper-extortionist Scorpio simultaneously exploits and undercuts the prestige embodied in two of the city’s newest and most luxurious buildings, the marble-clad Bank of America headquarters and the Holiday Inn hotel a few blocks north. A night-time confrontation at the 100 foot tall cross in Mount Davidson Park repeats the moral commentary from Coogan’s Bluff.

Other films have drawn on elements from many of these places to create fictional cities. Alex Proyas’s Dark City (1998) added a strong fantastical component to a guignol film noir, whilst Walter Hill’s Streets of Fire (1984) took a more realistic approach to synthesise a generic American urban landscape within which his enjoyably clichéd characters make their moves.

Money and romance, crime and fame, power and fear; there are eight million stories in the naked city. These have been some of them.