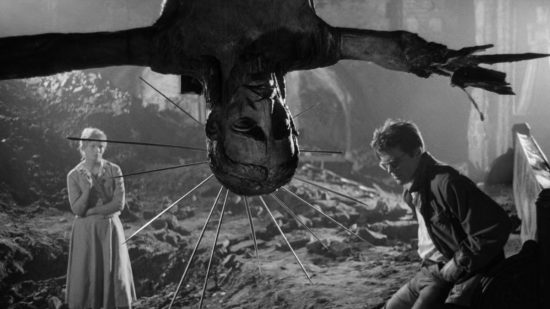 Andrzej Wajda started his career as a filmmaker in post-war Poland. His early films – A Generation, Kanal, Ashes and Diamonds, Lotna and Samson – focus on both the Second World War and the civil war uprising and its aftermath.

Wajda often emphasized the moral duty of the filmmaker in Poland, whose task it was to remember a generation who had perished during the war. He gave a voice to the young insurgents, as well as to the persecuted Jews. His films also challenge official versions of history imposed by the communist government. In Katyn, he turned to a topic that was not only a forbidden one under communism – but also one that represented a personal tragedy: his own father was among the Polish officers massacred by the NKDV in 1940.

Themes of death lie at the core of Wajda’s films. From the Polish Uhlans attacking German tanks in Lotna, to the young insurgents facing the inevitability of death in the sewers of Warsaw Kanal, his protagonists fight a battle which is doomed to fail. Yet his portraits of a sacrificed nation never once resort to sentimentally: Wajda continually challenges the idea of an idealised former national glory through a critical examination of both the past, and the present.

You’ll see this at play in Ashes and Diamonds: both the protagonist, Maciek, and the popular actor Zbigniew Cybulski who plays him in the film, are men of the present, creating strong links to social reality in Poland in the late 1950s. Cybulski’s performance, a blend of coolness and agitation, reveals the protagonist’s simmering vulnerability, reflecting both personal and collective instability. 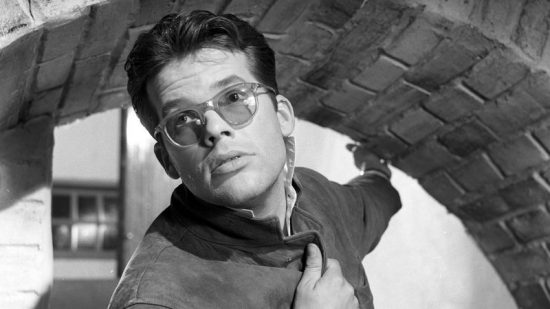 Man of Marble and Man of Iron bravely cover taboo subjects (Stalinism, the students’ 1968 revolt, as well as the workers’ 1970 revolts) and attempt to reveal a truth that differs from official versions. The leading female character is Man of Marble is a film student whose presence reflects the role of the artist working within the propaganda machinery (including Wajda’s own role); whereas Man of Iron depicts the events of August 1980 which led to the founding of Solidarność, the first trade union in a Warsaw Pact country not under the control of the ruling communist party. Both of these films deal with reality and image, the construction and distortion of reality by the state, and the individual’s fight against lies and corruption.

Wajda’s critical viewpoint did not change following the political developments after 1989. His later films, which deal with historical or contemporary topics, are still concerned with questions of moral integrity, loss, reality and illusion.

By avoiding conventional means of heroic identification, Holy Week, set during the Ghetto Uprising in 1943, rules out simple responses to complex moral choices. In dealing with what was for a long time a forbidden topic, Katyn pays tribute to the dead.

Afterimage, premiered a few weeks before Wajda’s death, deals once again with post-war Poland and the artist defying the political system. In this bleak portrayal of an oppressive regime, the past is a critical reflection of the present state of society – the filmmaker Wajda remains an admonisher against the perils of anti-democratic tendencies.

The use of primary colours in Afterimage is also a reference to the work of its protagonist, the painter Władysław Strzemiński. Wajda’s films, deeply rooted in Polish traditions in literature and painting, continually hark back to his country’s cultural heritage by giving these traditions a new meaning in the context of communist and post-communist Poland. He is not simply a mediator of history, but a key figure depicting social and political reality through the medium of a complex aesthetic language.

Taking up the legacy of the great writers and artists of the 19th century, Wajda offers visions of Poland which perpetuate and renew the imagined nation created in text and image by his precursors. Above and beyond this, his filmic oeuvre, concerned with profound questions of humanity and of his own medium, is and remains a universal treasure-house.