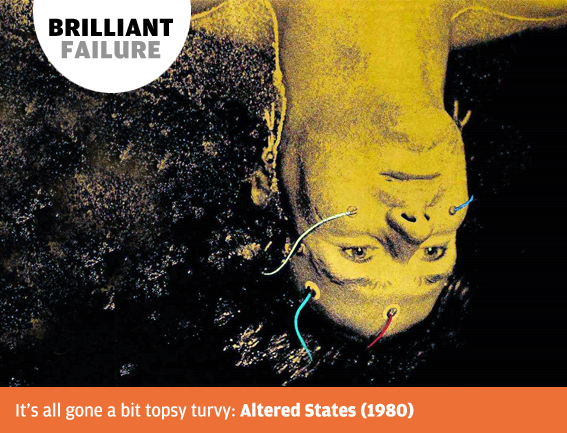 Few films fail quite so brilliantly as Altered States. Part chin-stroking talk-fest on trippy existentialism among the corduroy-jacketed academia of Harvard, part body-horror tripe of the silliest order, it’s a hallucinogenic broth combining Jung, Darwin and Timothy Leary which manages to be both deep and daft in equal measure. For all its shortcomings it remains required viewing for students of 80s cinematic curios. Somehow.

If you quit halfway through Altered States you’re in good company. For a while this was a sinking ship of a movie; original director Arthur Penn left two weeks into the project after a falling-out with screenwriter Paddy Chayefsky, the mad-as-hell brainiac behind Network (Sidney Lumet 1976) who himself had his name taken off the project once it was apparent what replacement helmer Ken ‘auteur terrible’ Russell planned to do with his material. Effects wizard John Dykstra walked away from the project and Columbia Pictures washed their hands of it, leaving it to be picked up and pushed out by Warner Brothers.

In fact if you were to quit halfway through watching the film you might reasonably conclude that what you’d witnessed to that point was another piece of breathlessly intense and intelligent Chayefsky wordsmithery of roughly equivalent calibre to his previous work, albeit one with messianic acid flashbacks involving multi-eyed goats, naked women turning into lizards and a couple eating ice cream before walking off into nuclear bomb sunset. Okay, so Russell’s ludicrous Catholic sex-and-death flourishes do manage to creep into the first half. 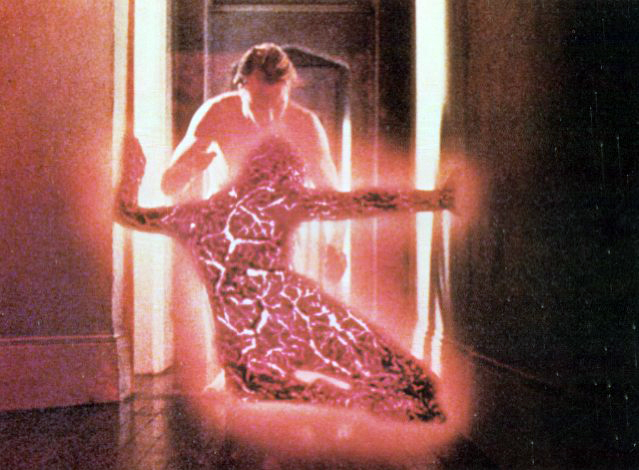 But from the opening scene of neuroscientist Edward Jessup (William Hurt in his big screen debut) hard wired and bobbing around in the saline solution of an upright isolation tank like a Jacques Cousteau of inner space, with co-researcher Arthur Rosenberg (a beardy, bespectacled Bob Balaban repeating his nerdy collegiate shtick previously seen in Close Encounters of the Third Kind (Steven Spielberg 1978)) monitoring the readouts, you could be forgiven for thinking you had tuned into one of the more adventurous BBC2 Open University programmes from the early 70s, minus the kipper ties.

For several more scenes we witness the ever-so-seriously clever Jessup huff and puff about the importance of his work – the use of sensory deprivation combined with the consumption of a tincture of the Mexican banisteriopsis caapi root as a means of tapping into altered states of consciousness in case you’re taking notes – stopping off to get acquainted with and fornicate the brains out of fellow egghead Emily (Blair Brown). Even at the point of orgasm Jessup experiences a vision of the crucified Christ. Penny for your thoughts Eddie?

The film’s major tidemark becomes visible around the time the team have returned from their ‘trip’ (both senses of the word) to Central America to acquire a supply of the tribal potion. Soon Jessup is regressing back to a hairy, snarling ape man and escaping the lab to go hunt antelope at the local zoo, then regressing even further back to a devolutionary point where he resembles a cross between Munch’s The Scream and a one-armed Mr. Blobby. 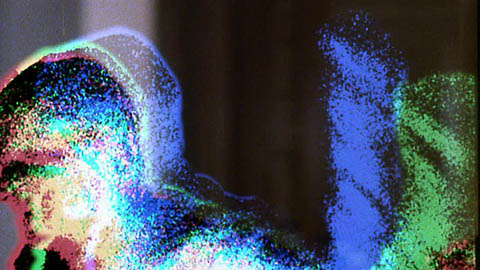 His immersion into and salvation from the primordial soup takes the form of a biogenetic equivalent of Dave Bowman’s journey through the star gate in Kubrick’s 2001: A Space Odyssey (1968), except with decidedly less convincing visual effects. Jessup is spat out the other side and everything is nicely wrapped up at the end when he declares to his saviour Emily that after all his experiments ‘the final truth of all things is that this is no final truth’. Two hours we’ve been waiting for an answer, and now you’re telling us this?

Despite or perhaps because of its earnest absurdity Altered States does manage to deliver some kind of satisfactory viewing experience. One might find oneself getting so far in and finding that the question ‘is it me or is this just total bollocks?’ popping into your head. The best plan is to go with it, not expecting it to make any real sense and try to enjoy Russell’s take on the material. It’s a bit like watching Samuel Becket interpreted by Benny Hill and on that basis it’s a bit of big-brained mindless fun.