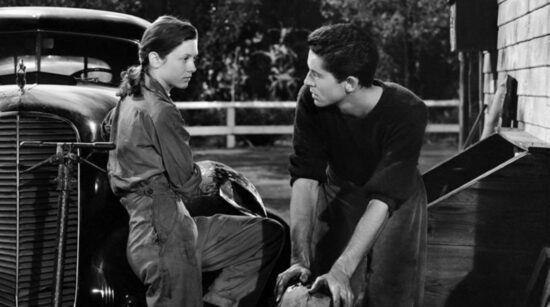 Rebel Without a Cause (1955) was the film that gave the confused and alienated teenager an identity. But before James Dean burst onto the screen as sensitive high-school misfit Jim Stark in his Lee blue jeans, white t-shirt and red windbreaker, becoming the embodiment of a generation and cementing his image as cool rebel, another Nicholas Ray film prefigured the story of the adolescent us-against-the-world feeling of ill-fated destiny, and another character, dressed in denim shirt, plain sweater, crisp white shirt, tie and leather jacket, started to give voice to and to embody the agonizing rebellion of post-war youth and the anxieties of an entire generation. It was Farley Granger’s Bowie in They Live by Night (1948).

This poetic film noir was Nicholas Ray’s first feature film and the first in a series of films of hard-hitting social realism that treated the theme of the confused and misunderstood American outsiders and outcasts, and paved the way for decades to come of couples-on-the-run noirs and thrillers. Nicholas Ray, one of the pioneer independent American filmmakers, pursued a strong narrative and visually overwhelming obsession in his film-making, which was outside of Hollywood tradition. His noirs dealt with the darkest side of the genre and his movies realistically showed the vulnerable young who looked for guidance from an older generation that failed to answer their questions and struggles because they themselves had never properly addressed their own. 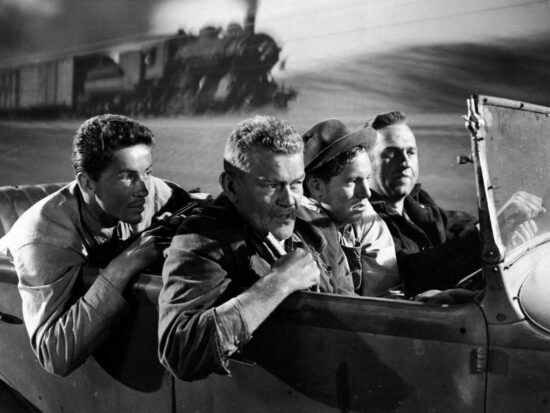 In They Live by Night, Bowie (Farley Granger) and Keechie (Cathy O’Donnell) are an innocent couple in their early twenties. When Bowie, a fugitive who has broken out of prison, after an unjust sentence, with some bank robbers, meets the innocent Keechie, each sees something in the other that no one else ever has, they fall in love despite the circumstances that put them on the wrong side of adulthood and start to hope for a life different than the one they were born into, trying to break loose from both a society and parents who either don’t understand them or refuse to try.

The film introduces them with a written line: “This boy and this girl were never properly introduced to the world we live in.” They are poor and they have few options for a better life, but they do hope to attain it in earnest only to find out that their young love cannot bloom on the barren terrain of crime and a broken society. Their attempt to escape from a cheap and insensitive reality is doomed, because the others won’t let them. The painful real life background invests the film with a truthful emotional center, and when Bowie and Keechie are on screen together, their closeness feels real, because their love is true and young, but all the more painful and unnerving because they sense, and you sense it, too, that it is preordained. Because there is darkness beneath even the slightest moment of happiness. The past won’t let them, it catches up with them, while the future fades in the distance, further away night after night. The present is all they have, it’s all we all have, and it is of no comfort to them. 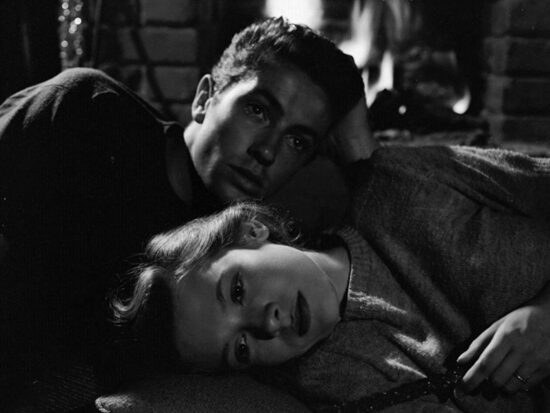 Seven years later, in 1955, Rebel Without a Cause would deal with teenage delinquency, one of the first films that did that. It was a film Nicholas Ray very much wanted to do, and he wanted to do it his way. He wrote the story, and carried out eight months of research to interview hundreds of police officers, judges, youth leaders, juvenile hall authorities and teenage gangs. Ray’s idea was to point out that juvenile delinquency was a function of the family, the kids being raised by parents with values too old-fashioned for their children’s needs. It was a controversial subject and the film was one of the first to bring disaffected youth into the mainstream conscience.

The 1950s were a time when blue jeans became not only a style staple, but an identity staple and the symbol of a generational revolution, and Nicholas Ray had a lot to do with that. Costume designer Moss Mabry spent several days at Los Angeles high schools, observing the clothes and styles of teenagers. Nicholas Ray also showed him a picture from Life of a group of college students for inspiration. And, most importantly, Ray shot the film in colour (he had insisted on colour for Johnny Guitar, too, a Western noir that owes part of its uniqueness to its colour photography, which is also what made that black and white sequence so haunting), despite the studio’s initial demand for black and white. Not only because of the feverish nature of the adolescent experience Ray wanted to evoke through light and composition, but for using colour as symbolism, too. Jim’s red windbreaker gives dramatic life to the turmoil within. Ray called in a colour consultant and they looked for ideas in old copies of Life magazine and chose to use primary colours in vivid blocks. “When you first see Jimmy in his red jacket against his black Merc, it’s not just a pose. It’s a warning, it’s a sign,” the director said. An icon was born, one that reverberates to this day. 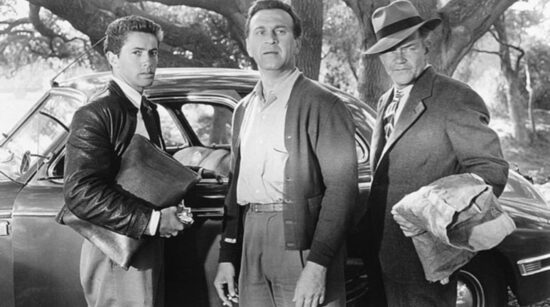 The seeds for the rebellious young however had been planted in They Live by Night, which found the perfect uniform for the man who could question the place of the individual, and of the teenager, in the American society, the voice of a generation: the crisp white shirt, a tie and the leather jacket – another costume choice Nicholas Ray certainly had a say in. “One thing you’ve got to learn, kid,” one of the gang tells Bowie, “you’ve got to look and act like other people.” And he takes him to buy him a suit. The leather jacket was his safeguard against an adult world he knew he didn’t belong to. Just as in Rebel Jim and Judy and Plato have found one another, each one of them trying to survive high school and longing for someone who can understand what they’re going through, in They Live by Night Bowie and Keechie have found not only love in one another, but mutual understanding. She is wearing his leather jacket at one point towards the end of the film and their union feels complete, no matter the odds. 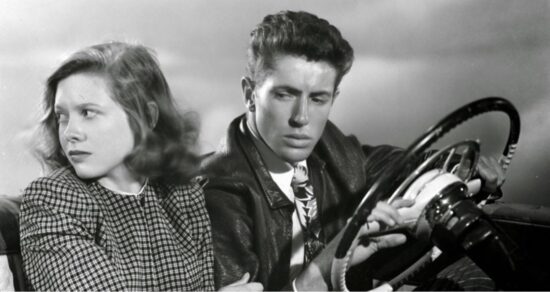