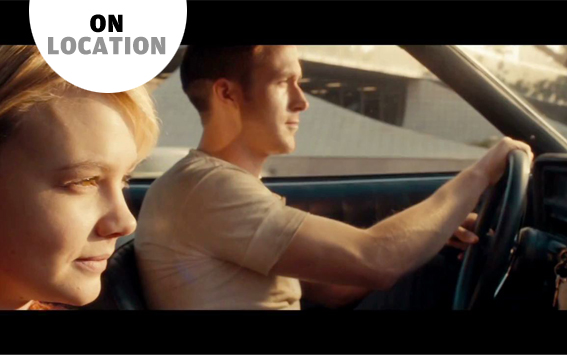 The brief scene at Los Angeles’s MacArthur park comes exactly half way through Nicolas Winding Refn’s slick and stylish thriller as Driver, drawn out of his solitary existence by new love interest Irene and her young son Benicio, takes on a risky grab-n-go getaway gig to protect them from harm.

As befalls every criminally minded movie loner who strays from the hermitic path, this job will be the undoing of Driver and subsequently derail the lives of every central character, thrusting the film from it’s ponderous, romantically tinged opening reel towards the kinetically violent denouement.

While the location suggests tranquillity, the exposed setting of MacArthur Park seems to unsettle Driver as – with back turned towards a turbulent lake – his standoff with mob underling Cook turns increasingly tense.

Built in the 1880s and renamed from Westlake Park on May 7, 1942 In honour of the great American army general, the MacArthur park area became known as the Champs-Élysées of Los Angeles in the early part of the 20th century, attracting the rich and famous to the many surrounding luxury hotels and glittering social events that frequently took place. Since 1985 however the park had become a hotbed for gang violence with shootings and thefts becoming a regular occurrence, perhaps influencing Refn’s decision to film there in order to invoke the criminally tinged spirit of the area for Drive‘s obvious stylistic nod to 1980s action movies.

While the park has made numerous appearances onscreen both in TV shows (The Shield, Num3ers) and movies (Volcano, Kiss Kiss Bang Bang), it still plays second fiddle to Echo Park as the preferred spot for location scouts seeking an inner city lakeside setting. But while Echo Park Lake boasts the oldest footbridge in LA County, made famous in the film Chinatown when J.J. Gittes spies on Hollis Mulwray and Kathryn, MacArthur Park’s more industrial setting (downtown’s skyscrapers are plainly visible) better suits Drive‘s visual narrative and acts as the perfect backdrop to the macho posturing of the above scene.