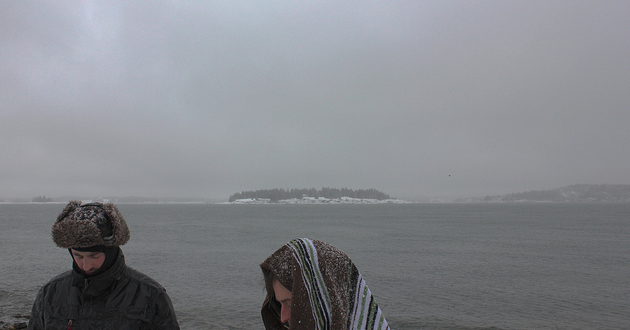 Where a film is set is not always integral to the movie, unless it’s a Sci-Fi. Try setting Aliens or Moon on a council estate in Clapham and see where it gets you.

But something like Midnight In Paris, for example, could be Midnight In Anywhere. It’s nice that it’s Paris, and it helps with the characters Owen Wilson hangs with, but it could be a different set of people in a different city, the story would remain the same.

Not so with Nor’easter. The whole film hangs on it being set in the wintry wilderness of Maine.

Now you probably haven’t caught up with this film yet. Writer/director Andrew Brotzman’s tale of a priest’s crisis of faith in a town torn apart by a kidnapping and a priest’s affair has only just been shown at this year’s Bradford International Film Festival (#BIFFest to its friends). It made quite an impact.

Sure it’s a flawed piece of work – it’s a first effort – but it looks stunning. And that’s down to the location.

The sparse landscapes are more than just window dressing, though. The isolation so clearly visible mirrors the isolation new-priest-in-town Erik (David Call) is feeling. His faith is in doubt, freezing God out of his thoughts and leaving him cold and alone.

Hearts have also frozen in the Green household, where Richard and Ellen (Richard Bekins and Haviland Morris) have struggled to deal with the disappearance of son Josh (Liam Aiken) some five years previously. Again, the sparse, frozen wastelands are used to mirror the isolation both are feeling at home.

You really couldn’t have this film anywhere else. It just wouldn’t work.

It helps, obviously, that Brotzman is a Maine native, allowing him to use the sparse white wonderland almost as an extra character – never stealing a scene, but always influencing the action. He also knows how to make it look vast.

And that’s an important aspect of Nor’easter – the feeling that all the characters are ultimately lost in the bigger picture, that there’s more going on than you can immediately see.

And all this snow, snow and snow (or, for a change of pace, a freezing trip on a small ferry across a vast body of water) serves to keep the pace slow and thoughtful. Lets face it, you can’t run about like a loon when you have to drag your legs through snow, frozen snow or icy paths. It’s not going to happen.

Equally, a desert or beach does not lend itself to cold introspection. One doesn’t tend to gaze off into the distance feeling alone when there’s a pina colada at your elbow. Well, you can, but you’d feel a bit of a tit.

No, while some films use location as merely a place to stand the pretty people, Nor’easter wouldn’t exist without its setting. It’s integral, essential – and that’s strangely heartwarming.

Watch the trailer for Nor’easter here