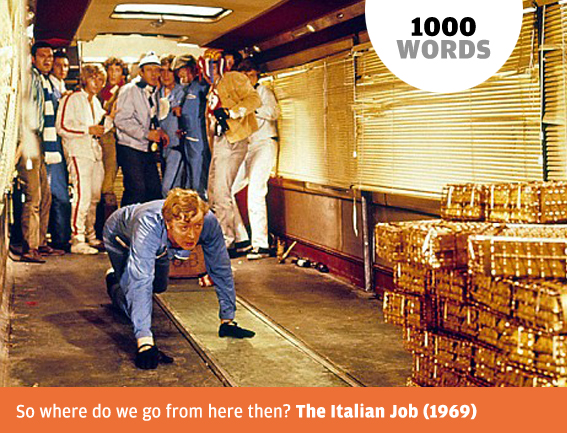 It’s a moment burnt into the retina of thousands of film fans; Michael Caine as the bank robber Charlie Croker, edging towards the bullion at the tail end of the coach dangling precariously over the edge of a precipice in the final moments of The Italian Job (Peter Collinson 1969). It’s literally the end of the road for Croker’s gang of misfits, but it’s also the moment that has come to represent a cul-de-sac of sorts for the British male moviegoer.

A dead end culturally speaking at least. Don’t get me wrong; I belong to the 70s generation that grew up expecting and looking forward to a screening of The Italian Job on TV at some point over the Christmas holidays. It was as much of a yuletide staple as trays of Matchmakers and ‘Eat Me’ dates, mums smoking Menthol Mores and ‘big present’ Raleigh Choppers being test-ridden on the back streets. It seemed to be an ITV favourite back then, usually screened around tea time, sometimes a bit earlier.

Its mild swearword content gave yesteryear’s schoolkids a certain frisson of grown-upness. Who didn’t enjoy repeating the helpful assertion ‘you’re only supposed to blow the BLOODY doors off!’ emphasising the B word loudly in the playground once school recommenced in January? Funny how times change by the way; in 1998 the ITC bowed to complaints about an advert produced by M&C Saatchi as part of a Sky subscription campaign which featured a taxi driver mimicking Caine’s famous line from the film. The ITC ordered that the commercial should not be screened before 9pm because ‘parents were entitled to expect that television advertising should not appear to endorse or encourage swearing’. Caine’s ‘bloody’ was clearly allowed to pass under the pre-watershed wire by the schedulers back in the 70s, along with innumerable ‘cobblers’, ‘knockers’ ‘buggers’ and ‘bleeders’. At least that’s how I remember it. Bloody good job I say.

But I digress. The film was, and in many senses still is, the last word on post-war/pre-70s British manliness. It’s a Watney’s Party Seven canful of chirpy rogues, upper class twits, blokeish patriots, effeminate dandies, racial stereotypes, euroscepticism, Mini Coopers in the colours of the Union Jack, requisite mod haircuts and laddish football references. When Croker’s boys are finally assembled on board the Bedford VAL coach for the hairem scarem escape around the winding alpine road in the final reel they could almost pass for Bobby Moore and the rest of the class of ’66 popping corks and juggling the Jules Rimet on the coach out of Wembley.

Caine himself acknowledged in a 1999 interview published in the LA Times to mark the film’s thirtieth anniversary and cinema rerelease that the Croker character has come to serve as a durable icon of British machismo: ‘If you think of The Italian Job, Get Carter and Alfie, then to young English guys now I represent English heterosexual masculinity without any doubts. You don’t look at me and say, I wonder if he’s gay? You look at me and think, he’s a geezer, he’s one of us.’

The Italian Job is tattooed on the minds of a generational subculture of British (for ‘British’ read English) males as permanently as the blue upright lion on the arms of Chelsea Headhunters. It’s the film that taught many boys and men the meaning of the word ‘iconic’. It continues to be revisited; it’s the ultimate World Cup build-up/come-down movie, it’s pre- and post-stag night televisual pap for the alcoholically supine. It has survived political correctness, lived on beyond the 90s new lad movement and has brushed off Lock Stock copyists to remain ‘everybody’s’ favourite film, where ‘everybody’ equals Mr. bloke-next-door with two point four dogs who cried buckets at Diana’s funeral, cracked heads on the terraces back in the day, is psychopathically proud to be normal and absolutely thinks he embodies everybody. i.e. not everybody.

But wait. That ending. What does it actually communicate to its generations of avid audiences as they sit on the edge of their half-paid-for DFS sofa not quite able to reach their next tinny? That vehicular teeter is preceded by the extended anthem come to be known by its chorus repeat ‘We are the Self-Preservation Society!’, which I’d put on a par with ‘No one likes us, we don’t care’, ‘You’re going home in a London ambulance’ and that all-time classic ‘Come and have a go if you think you’re hard enough’ in the Nasty Little Englander Theme Tune charts. Of course it turns out to be the conceited prelude to a typically British moment of snatching defeat from the jaws of victory. Which in a curious way forms that part of the bulldog myth, along with unpunctual public transport, assorted sporting flops and rubbish weather that states with pride ‘we’re British and we’re a bit shit’.

‘Hang on a minute lads … I’ve got a great idea’ says Caine. Perhaps he went on to say ‘Let’s just stay right where we are for the next fifty years. You see that gold there? That represents The British Empire. The fact is it’s had its day and all we can do is maintain this precarious balancing act to stop it sliding into the abyss. Face it fellas, we’re never gonna get it back, but if we abandon ship to save our own skins our dads and kids and every salt-of-the-earth bloke back home would never forgive us for letting it slip away. So we’ll just stay put, that’s what we’ll do. God save the Queen!’

A couple of years ago John Godwin, an IT manager from Surrey won first prize in a Royal Society of Chemistry competition to devise the best way of saving the gang’s lives and the gold. It involved smashing windows to let the tyres down, draining the fuel tank and putting rocks on the bus to counterbalance the removal of the gold bars. Mr Godwin said ‘I have watched The Italian Job many times from when I was a very young boy. To leave them hanging over the edge of the cliff seemed to be a waste.’

Call me old-fashioned, but how bloody unpatriotic is that?