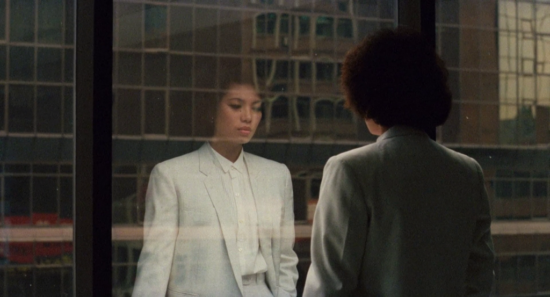 A silhouette in white seen from behind. Wide-legged white trousers and a white shoulder-padded blazer. Low white kitten heels clattering on the tiles of an empty apartment overlooking a similar tall building of flats. From behind oversized sunglasses she sizes up the apartment and begins to list the electronic appliances that could fit in a corner of a room, all the ambitions and comforts of modern life, a life she seems to have been long settling in. She is not alone. He is casually dressed and, as he is mimicking a baseball player with his swinging arms, does not seem to share her enthusiasm and ideas of a dream-life. That’s the opening scene from Taipei Story (1985), a film that captures a city and a couple with contradicting world views, a city and a couple caught between past and future, between tradition and modernity, between troubled historical identity and Western newness. A broken city, a broken relationship. 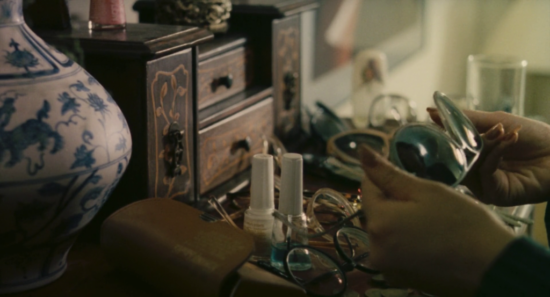 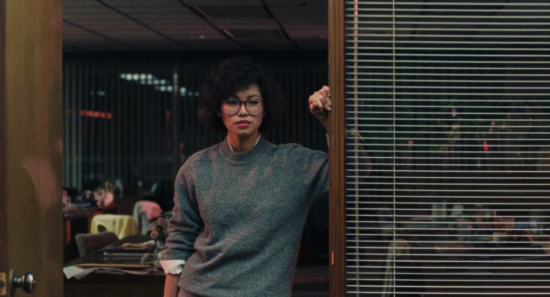 Chin (Chin Tsai) is an upwardly young professional working for a Taiwanese property-development firm. Her job will afford her to live in this new apartment, having just moved out of her parents’ house and from under the influence of her domineering father. Chin wants financial independence and success. But the present and future cannot easily be cut from the past. Her boyfriend, Lung, played by Taiwanese filmmaker Hou Hsiao-Hsien in a rare on-screen performance, is one person in her present who is stuck in the past, a washed-up baseball player owning a small textile business, hanging on to his glory days (his favourite pastime is watching taped American baseball games), on old friends and family ties. He is not interested in her aspirations, which are reflected not just in her apartment, but also in her friends, in her rebellious young sister (kids are a dominant force in adopting a new look with incredible verve and a marketing man’s dream in the newly Westernised culture) and in her clothes. In a rare moment when their worlds converge, he awkwardly collects her colleagues’ business cards which they hand him over when they all meet for a drink, all of them still in their suits and ties; he has clearly made an effort to swap his polo t-shirts and baseball jacket for an unbuttoned shirt and blazer.

She is all about change, the modern woman who can assert herself, in pursuit of an image and a life that convey Western values and money. She is the new woman who does not seek to please, who defines her personality and an unyielding authoritativeness with her unsmiling face and power dressing. Even her exercising on the living room carpet in sweatshirt and sweatpants is somehow the personification of the American image of the 1980s working woman who works out before going to the office. But as it often happens when a style transfers to another culture, there are certain subtleties that make the new version more interesting than the original. Suits in two pieces, baggy blazers, pressed collars, comfortable-fitting woolen sweaters (one such sweater – worn over a white shirt, sleeves rolled up, a matching straight-cut, knee-length woolen skirt, black hosiery and flat, laced-up shoes – looks incredibly modern, more 2000s than 1980s) and shielding sunglasses – she has an entire selection to choose from every day. They are more symbolic than useful, as the smog is more present than the sun in Taipei. 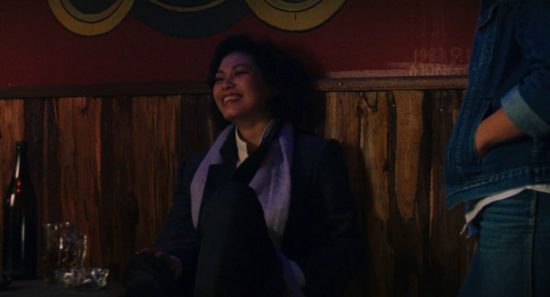 Edward Yang’s view on the rapid Westernisation of Taiwan is not very optimistic. The call of life abroad is ever present even as the country – mirrored in a Taipei cladded in flashing signs, almighty brand logos and baseball fields where children play the game, and enveloped in American music blasting from smoke-filled bars – is set up for economic growth.

Both Lung and Chin are thinking of going to America. It seems odd that they even have plans for a future together, as they spend more time apart than with one another. He’s had a taste of America when he went to visit his sister and her husband who has asked him to go into business with him. But the prospect of working under his brother-in-law, or the recounting of an episode where his brother-in-law shot and killed a black man who was trespassing and was then acquitted on account of self-defense, reveal the mirage rather than the attainability of the American Dream and freedom. But it is very clear that globalisation is there to stay and that American power has brought change that cannot be undone.

Chin’s way, ladder-climbing in the corporate world, sadly seems to be the only way. The specificity of her clothing makes the film very prescient. She is wearing her white trouser suit once again in the closing scene, as she is making career plans with her former boss who is setting up a new business in town. Peering from behind her sunglasses from another towering construction, this time a glass office building, her over-conscious image remains the most palpable promise in a globalised post-modernity laden with promises that life may not want to keep. 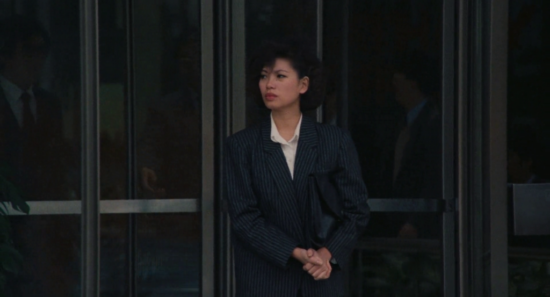