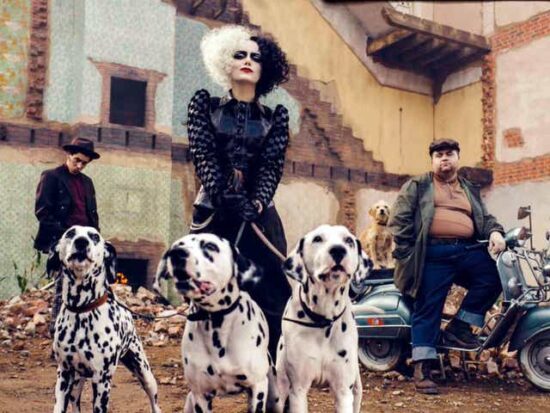 Following the anti-hero trend – from Maleficent (2014) to Joker (2019) – Disney brings back a most unexpected villain story: the animal abuser Cruella from 101 Dalmatians (1961, 1996). What is equally astonishing is how well put together everything is, but this completeness is only possible by examining Cruella (2021) on its own, not as a prequel to 101 Dalmatians.

Born with the iconic black and white hair, Estella (Emma Stone) strives to become a fashion designer in London. However, fate deals her a cruel hand when her mother (Emily Beecham) is pushed down a cliff. Orphaned at a young age, Estella makes her living as a pickpocket with orphans Jasper (Joel Fry) and Horace (Paul Walter Hauser). This trade comes with its upside, and Estella’s unorthodox fashion sense and opportunist mentality quickly gets the attention of London’s top designer, The Baroness (Emma Thompson). What follows is a rivalry of fashion and clash of power as Estella unveils her extreme personality Cruella.

Cruella is far removed from the merciless villain of 101 Dalmatians, though the Baroness certainly fits the bill of the coldblooded antagonist. Her haute-couture costumes and brazen attitude are a nod to The Devil Wears Prada (2006) and a sharp contrast to Cruella’s bold acts. The most praiseworthy bit is the costume design: scandalous, provocative, and complemented to perfection by the magic of CGI. Mixed between elegance and punk-rock aesthetic, with a flash-mob presentation, the fashion carries the film far in sheer iconic visuals. And this is why, despite being PG-13, Cruella’s costume design gives a fairy tale touch – like the live action Cinderella (2015) dress—to the majority adult audience.

Craig Gillespie adds rather an excessive exposition to the story, casting prep school trauma and Dickensian childhood all at once. The buildup to Cruella’s persona is sudden and weak. But the witticism throughout makes even the side-characters that much more real. In a combat at a crowded party, after dramatically shattering the dress code with a red gown, Cruella cheekily comments, “I’d like to remind you all that I’m doing this in heels”.

All the best points aside, Cruella addresses very little of its original connection to 101 Dalmatians, which is understandable considering how odious the villain truly is. As a standalone piece, though, Disney’s Cruella fits right in with Suicide Squad’s Harley Quinn, with just as outlandish a fashion statement.