There are those convinced George Lucas only ever dreamed up Star Wars so he could sell spin-off toys to kids. And now, nine episodes in (is it nine? you tell me!), movie merchandise helps keep the commercial world a-spinning.

Merch can be cool, though – the more unlikely it is, the more “cultish”, the cooler it gets. I always loved my Gran Torino: The TV Series lunchbox, for instance. Or take the example of writer-director Panos Cosmatos’s Mandy (2018), the intoxicating, inspired and cathartic you-took-my-girl-now-I’ll-nail-your-ass Nic Cage revenge extravaganza, with Andrea Riseborough as the tuned-into-nature heavy-metal princess of the title: abducted, abused, incinerated but never forgotten, forever cherished.

Would you believe the movie can be commemorated / honoured / worshipped / rewarded by the simple online purchase of anything and everything from baseball caps to masks to Funko Pops!? From a Chainsaw Battle Scene figure to prop replicas, and even Cheddar Goblin Mac ’n’ Cheese (yes, you read that right – Cheddar Goblin Mac ’n’ Cheese)? People actually buy these things, you know. So if you see someone standing at the bar wearing a white and black 44 baseball shirt, order him vodka straight up before making a quick and clean exit. 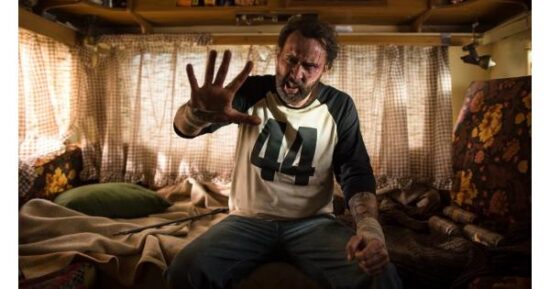 Then there’s the small matter of the long-playing purple vinyl record Lift It Down, by one Jeremiah Sand. You can even own the record by the guy in the movie! Although, like me, you may be thinking: Who would want to play a record by that guy? 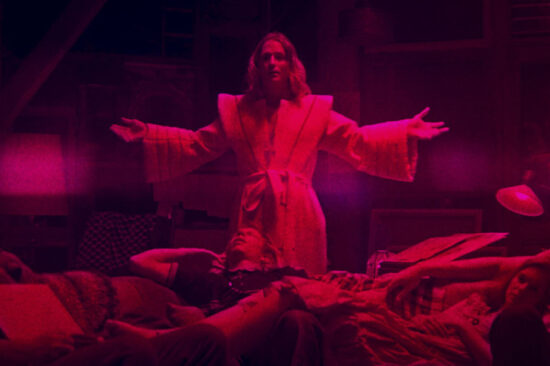 On first viewing, my only caveat (I otherwise instantly commemorated / honoured / worshipped / rewarded this special, hypnotic, hyper-realised movie) was that there seemed to be too much Jeremiah Sand (superbly cast Brit actor Linus Roache, son of Coronation Street’s Bill Roache) and not enough Red Miller (the Cage-meister, of course). Subsequent viewings, though, helped open my eyes and placed Jeremiah properly front and centre as the key inciting character in what was, perhaps surprisingly, a very topical drama (although it’s set in 1983, apparently).

The not well endowed, childishly demanding, pathetically irresponsible Sand, leader of hippie-ish cult Children of the New Dawn, might be more Charles Manson than Donald Trump. But after the furore over the now ex-President’s did-he-or-didn’t-he rallying call to followers to charge the US Capitol, I straightaway recalled would-be Jesus Jeremiah’s delegated recruitment of biker gang the Black Skulls, part Tolkien’s Nazgul and part Hell’s Angels, as if an alternative Knight of Umbar, Shadow Lord, Dwimmerlaik or Witch-king of Angmar had been re-imagined by a gonzo, ether-inhaling Hunter S. Thompson. 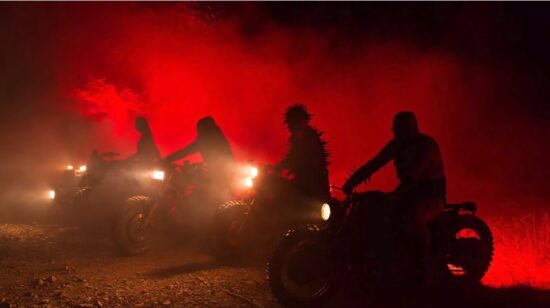 In interviews around the time of Mandy’s release, Cosmatos spoke of “delusional men who think they’re the centre of the universe”, and said the film’s production “happened to coincide with Donald Trump being voted into office … and I almost began to see Jeremiah as a weird hybrid of Mike Pence and Trump. Like they merged into one person of religious fanaticism and delusional egomania”. Yes, Panos, if only the truly guilty, the power hungry, the power ripped, could feel the metaphorical wrath of Red’s hand-forged battle axe, The Beast (replicas of The Beast are also available).

Sand, if cornered, like Trump after the attack on the Capitol, would very probably claim ignorance and innocence, turn his back on each and every subsequent instance of demonic mayhem and carry on his merry way, on his quest for immortality, a journey probably punctuated by a good few drive-thru McDonald’s. But Red is on a quest too, a journey towards some kind of Zen self-erasure – in an echo of betrayed safecracker Frank (Jimmy Caan) in Michael Mann’s Thief (1981), revenge for Red seems to mean AN END TO EVERYTHING. And like Pacino’s Vincent Hanna in Mann’s Heat (1995), Red is only “what he’s going after”. Yes, Mandy is epic like that.

Will Red get his revenge? Or will Sand slip through his fingers? And what is there, really, in the void beyond? Let’s not do spoilers, but let’s just say Mandy is ultimately about grief – a tough, tortuous subject, even for singular and visionary artists like Cosmatos (Beyond The Black Rainbow, 2010). 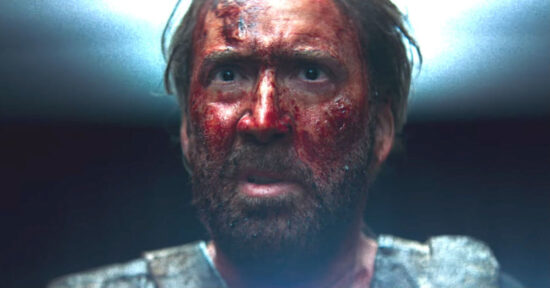 What do you say to the grief-stricken? What can one do? Go all out, say and do the wrong thing, risk coming across as profane, even perverse? Or hit the wrong note on the other end of the scale, try to come over all romantic, too sweet? Or maybe a combo of the two – somewhere in between? Like Mandy, mixing the profane and the perverse with the sweet and romantic. Make that connection, as Jackson Browne sings in “Sky Blue And Black”: “I hear the sound of the world where we played, and the far too simple beauty of the promises we made … where the touch of the lover ends and the soul of a friend begins, there’s a need to be separate and a need to be one and a struggle neither wins.”

In Red’s haunted eyes, staring out from that gore-spattered face, there is a typically Cage-ian, puppy-dog yearning. He only wants to see the one he loves.