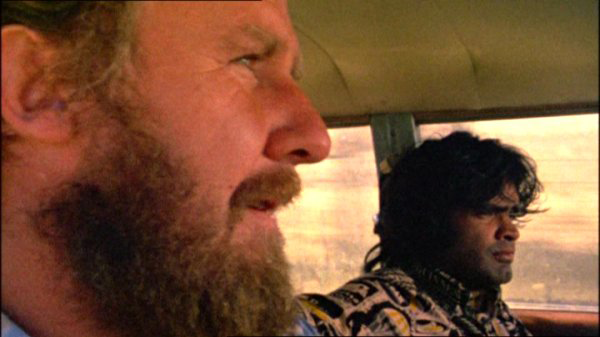 Noyce collaborated on Backroads with Aboriginal activist Gary Foley, who, apart from his political actions such as the establishment of the Aboriginal Tent Embassy in Canberra in 1972, had also worked in theatre. As a result, Backroads is the first feature in which Aboriginal characters in major roles are neither romanticized nor patronized. Foley and established actor Bill Hunter were encouraged to improvise and the resulting banter has a fresh and rough realism. Noyce’s background in documentary is evident in the confidence with which he goes with the flow of the dialogue, capturing the action on the run with a small crew. The sound recordist apparently spent quite some time in the boot.

Backroads balances the frustrated anger of disempowered men carried by both Jack and Gary with easy humour and the dynamic, clean images of cinematographer Russell Boyd. The breezy jazz score effectively enhances the vibrancy of the Pontiac speeding through red dirt country. Backroads taps into the zeitgeist of 1970s’ Australia, when land rights, the women’s movement, and the cultural assimilation of post-war European migrants were hot topics and, for most of the film’s length, the dialogue between Gary, Jack, Anna and Jean-Claude carries the drama. The real kick in the story, however, is when Uncle Joe, who has barely said a word throughout, shoots a wealthy fisherman at point-blank range. This act of seemingly-unprovoked violence is quickly answered, and in one sense explained, by the enthusiasm with which the police chase down and shoot Gary dead.

Shot on 16mm, and only 60 minutes in length, Backroads had limited commercial exposure in Australia but, after appearing at the Berlin and Cannes festivals, played at London’s La Scala cinema for six months. After many years directing in Hollywood, Phillip Noyce returned to Australia to make his second road move, Rabbit-Proof Fence.

A full synopsis and critique of Backroads can be read at www.worldcinemadirectory.co.uk